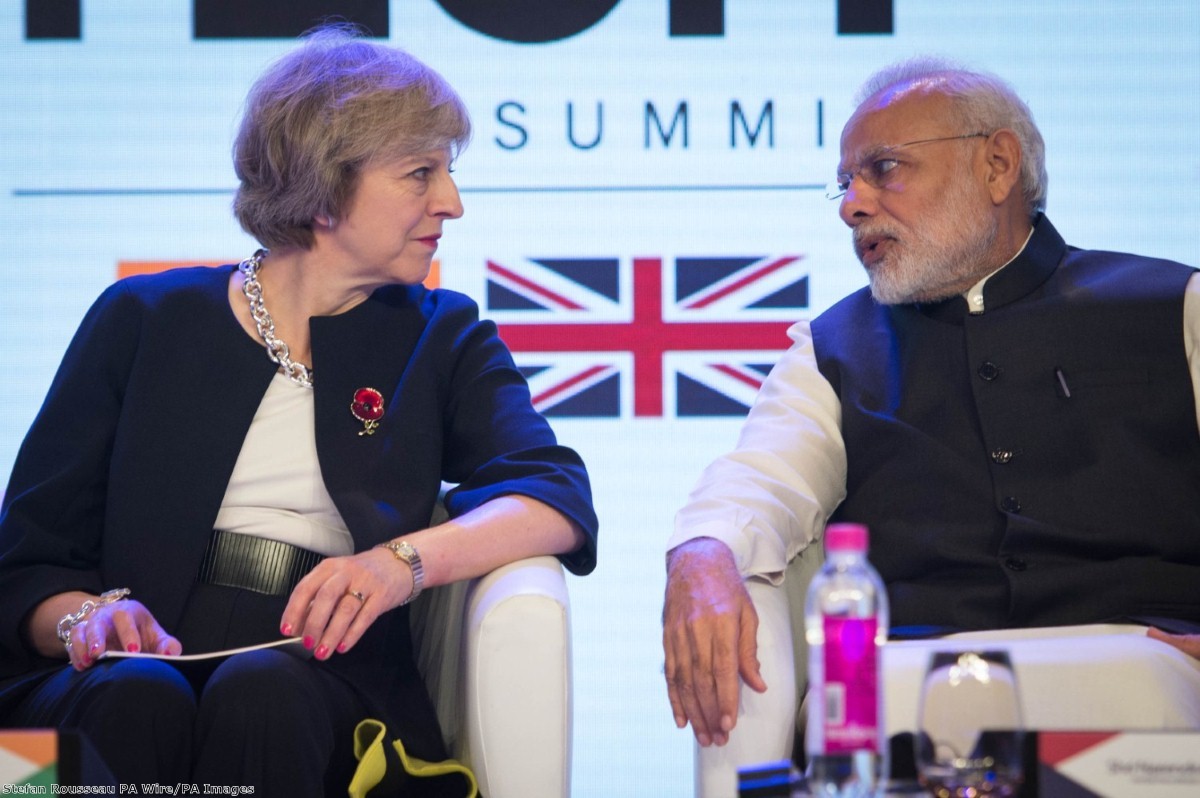 When Theresa May gets back from India she'll find some scraps here and there to pretend it was a successful visit. She's already announced a tweak of the visa system for high-net worth individuals, and will wrap up a couple of deals, like a £15 million imaging and diagnostic centre by Lyca Health UK. It's all small fry. Everything substantial is in jeopardy.

The reality of the trip is that it shows the failure of Brexit in the short, medium and long-term, both specifically in how Britain leaves Europe but also generally in how it is cutting itself off from the world.

Countries like India have no interest in signing a deal with Britain until they know what its relationship is with Europe and the WTO, a process which might take up to ten years.

Indian firms, like those from the US, Japan and elsewhere, want to use Britain as a beachhead for their activities in Europe, but that requires membership of – not access to – the single market. If they have no rights to sell in Europe by being in Britain there is no need for them to be here. They might as well base themselves in a country with lower rents and lower salaries.

This is also the case with regulation. Previously, Indian pharmaceutical firms – expected to be worth £40 billion by 2020 – would tend to base their European operations in London because it was where the European Medicines Agency was based. But if Britain leaves the single market and European regulatory jurisdiction, that centre is going to have to move. Foreign pharmaceutical firms will go with it. The only thing they'll be getting from UK medicines agencies is authorisation for a UK market.

Tata, India's biggest car maker, will obviously be most concerned with Jaguar Land Rover. Maybe this company will be given a secret deal, like Nissan. But even if it is, it will find that regulation for a product rapidly changing due to driverless technology is being formulated in Brussels, not London. And for that reason it will ultimately move for political reasons even if it does not have to do so for economic ones.

If Britain leaves the single market, it will take around seven years to secure a trade deal with the EU. That's how long Canada took to establish a much easier deal, so it is a generous prediction. Many believe Britain will be unable to sign a deal at all. Somewhere in this process the UK will also need to establish itself independently at the WTO, which will bring on another anguished multi-layered negotiation round. And only after that will it be able to negotiate trade deals with India. The point at which they'll be ratified will be years later.

And then the long-term problems with Brexit will begin. The main goal of Indian negotiating teams in a trade deal will be immigration. As A Didar Singh, head of the Federation of Indian Chambers of Commerce and Industry, told the Guardian: "Our whole issue is that of the mobility of our human capital."

Britain wants access for its financial services in India. In return it will be expected to open itself up to more immigration from India. That will be the deal, or there will be no deal.

In reality, this is a win-win for Britain. It gets financial service access abroad and in exchange expands a domestic process which has proved very beneficial for the country. Indian foreign students are thought to bring £20,000 each to the education sector. When they were allowed to stay and look for work after their studies, they proved disproportionately entrepreneurial and successful. These children of a growing economy return home with warm thoughts of the country they spent their youth in and eager to do more bsuines there.

But British policy no longer corresponds to reality. It corresponds to angry anti-immigrant sentiment, without any appreciation of the economic consequences. So Indian foreign students have been subject to a clamp down. The post-study route has been cancelled. Foreign students are included in net migration numbers, making them seem like a problem rather than a benefit. We arrest and detain and deport them on the basis of hearsay evidence. We trap them in the bureaucratic horror of our immigration system.

Indian student numbers have drastically reduced while rising in countries which welcome them, like Canada, Australia and the US. But mercifully British educational institutions have reputations which are stronger than the efforts of the government to undermine them, so when that trade deal is eventually negotiated, Britain will be asked to make concessions on immigration, for foreign students and some other Indian workers.

There will be none of the Brexiters' much-cherished sense of control. That deal will not be conducted in a parliament. It will not be in the open. It will be conducted behind closed doors, with as little scrutiny as possible, and only the most meaningless platitudes uttered by ministers. Britain will be suffering economically from cutting itself off from its main trading market and unprecedented, chaotic talks at the WTO. It will be more desperate for a deal than India is and consequently will give more ground, which in this case means more immigration for less financial service access. Those commitments, once ratified, will never be reversed. Trade deals are almost never repealed or renegotiated. It just doesn't happen.

So what kind of control is this exactly? None. Certainly far less than in Europe.

May will put a brave face on her return from India, but in reality it shows why Brexit is such a plainly self-defeating initiative. The deals we've been promised are far away. By the time they come, much of the Indian investment in the UK will have migrated to the continent. And when they're signed, if indeed they ever are, we'll be giving away precisely the control which Brexiters claimed they'd returned to us.

Once upon a time, Leavers held up trade deals with Commonwealth partners as the great pot of gold at the end of the Brexit rainbow.  It's a mirage.

The reality of the world is that people want to move for fortune and quality of life and countries want to trade for mutual benefit. May can say whatever she likes about Britain being open to the world, but her actions are the exact opposite: She is reducing immigration as much as possible, trying to destroy free movement, and ending free trade with our largest export market. Britain's posture is turned against the direction of the world. There are consequences for that and India will be one of the countries which demonstrates them.