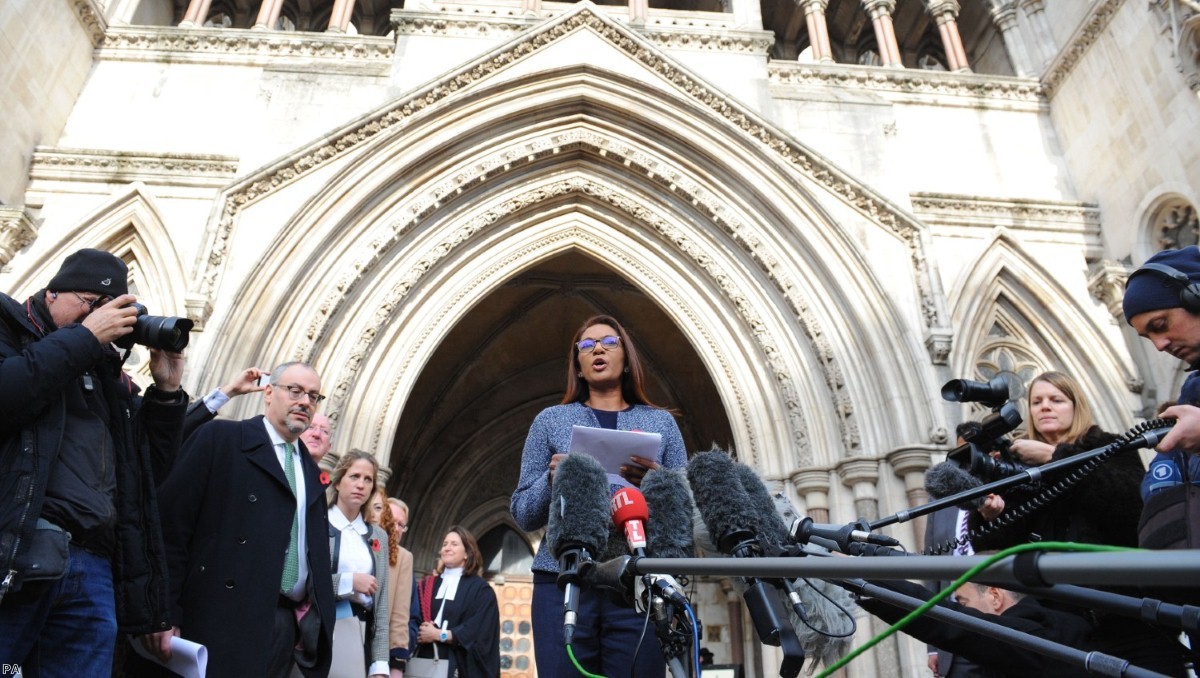 Enemies of the people: The Brexit campaign is now putting lives in danger

And it is already having a dangerous effect. In the hours that followed its publication, Brexit supporters have taken to social media to call for the three men to be publicly executed.

"Off with their heads, I'm not joking" wrote one Brexit supporter on Facebook. "The death penalty still exist (sic) for treason and that is what should happen to these traitors," wrote another.

One of the main litigants in the case, Gina Miller, also faced immediate calls for her murder.

"Kill her! 2 behind the ear. Throw her in the garbage. Dustbin, whatever…" wrote one man on a Ukip-supporting Facebook forum.

"I hope she gets f…king killed," wrote another woman, who while apparently comfortable publicly calling for the murder of a fellow human being, felt squeamish about doing so while swearing.

"I hope she gets shot" added another.

Brexiters react to the Daily Mail’s “Enemies of the People” front page, by calling for the three judges to be publicly executed. pic.twitter.com/bFiSECkoVR

Just some of the many Facebook posts from Brexiters today calling for Gina Miller to be killed. What's happening to this country? pic.twitter.com/ahYekgERb0

It would be easy to write these off as empty threats, and hopefully that is all they are. But in the less than six months that have passed since the murder of Jo Cox, it is no longer safe to assume this to be the case.

It's worth remembering that when the man suspected of killing Cox was asked his name in court earlier this year, he listed it as "death to traitors, Freedom to Britain." At the time this seemed shocking and terrifying. Now it it is something that is echoed openly by otherwise apparently ordinary members of the public. What once looked like the fringe rantings of a single man have suddenly become central to our national debate.

Of course, countries do not change overnight. Britain did not go to bed on the night of June 23rd as an open, united and tolerant country and wake up the next morning as a closed, divided and bigoted one.

But, given the right conditions, elements that were once lurking in the background can be allowed to come to the fore. Sharks that were once circling deep underwater can suddenly feel confident enough to rise to the surface en masse.

And there it is – Gina Miller is not British and neither am I apparently. What do we have in common I wonder? pic.twitter.com/6R0HiAvBMu

Because the truth is that the forces that led to a huge spike in hate crime following the referendum campaign had always been there. It's just that now our society has chosen to allow those forces to step out into the light.

And their emergence has not come by accident. It has come as a result of deliberate choices.

When Jo Cox opted to live her life standing up for vulnerable people fleeing from dangerous parts of the world, she did so out of choice.

The British press have also made choices. When one of Britain's biggest-selling newspapers chose to employ a columnist who openly praised the Austrian far right, under the headline "who will put Britain first?" then they carry responsibility for that choice. When that same newspaper published a picture of a blown-up bus under a headline suggesting that Labour's Muslim candidate for mayor of London was a "friend of terrorists", then they carry responsibility for that choice.

And those choices were made, not just over months, but over years and decades as well. Taken in isolation, those choices may seem harmless. Taken together, they have pushed Britain towards a truly dangerous and violent direction. For the good of us all, it's time we chose to think again.