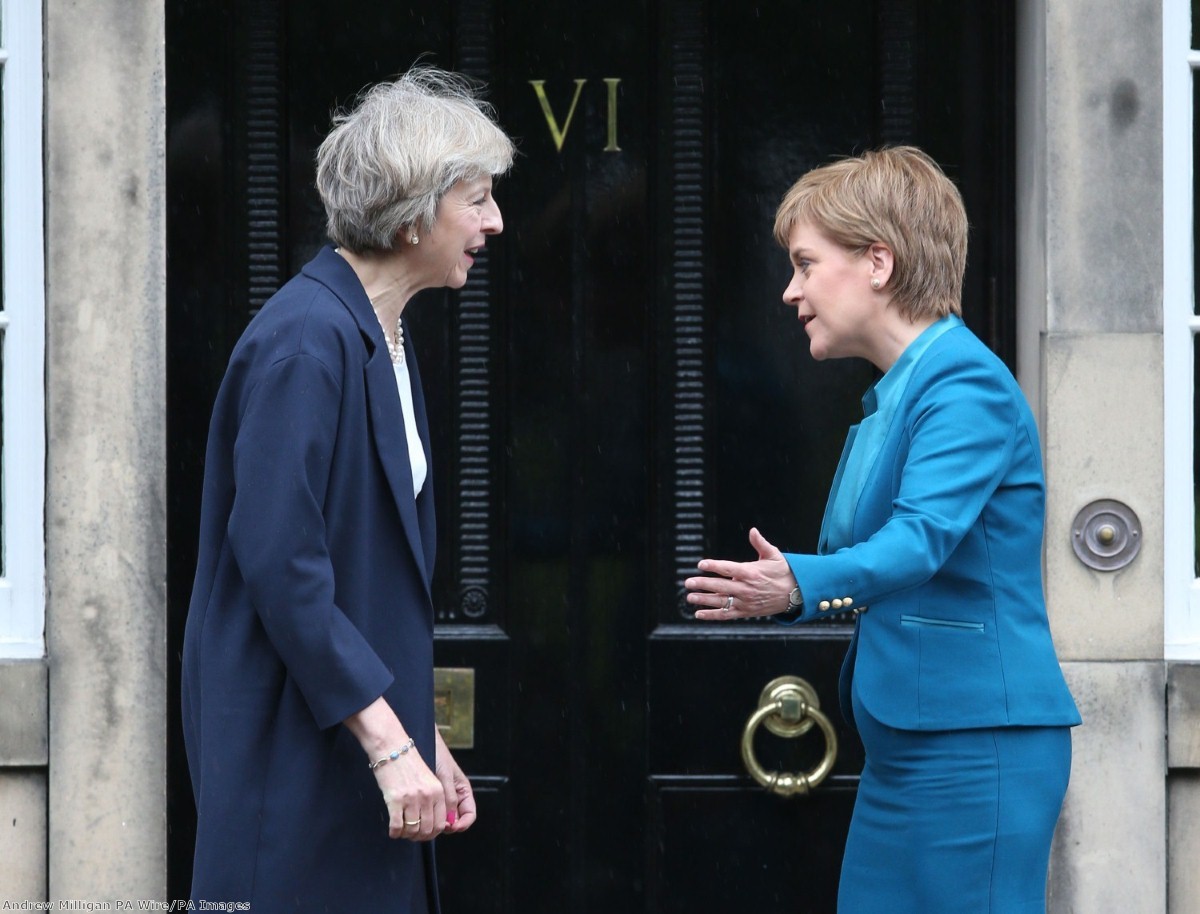 Theresa May has finally seen fit to promise Scotland, Wales and Northern Ireland some input into the Brexit process. The leaders of the devolved nations will get a "direct line" to Brexit secretary David Davis in the form of a new forum meeting about once a month.

Too little, too late comes to mind. Given that Davis' Commons statements typically feature no announcements of substance whatsoever, one wonders how meaningful a gift this really is.

May had the right idea at the start of her premiership when she travelled to Northern Ireland and Scotland, both of which voted strongly Remain, to assure their leaders she would pursue Brexit in a manner which respected their concerns.

She then proceeded to do nothing of the sort. Without bothering to consult with Northern Ireland or Scotland, she went to the Tory party conference and effectively announced a hard Brexit outside the single market. She didn't use the phrase specifically – May insists, against all logic and evidence, that there are no choices to be made – but by making immigration a red line, promising to remove the UK from the jurisdiction of the European Court of Justice and insisting Westminster would make all decisions on food labelling, it was clear which direction she was travelling.

Nicola Sturgeon was reduced to tweeting out her disapproval.

May is acting in this heavy-handed way because she feels she has Sturgeon trapped. There has been no real boost for independence post Brexit. Support levels are around where they were after the 2014 referendum.

What's more, leaving the single market makes it harder for the SNP to win an independence referendum, because of the economic impact. If it's a choice between the European single market and the British single market, Scots will note that the UK channels far larger sums. If the last vote was lost on economics, this one would be even harder to win.

Westminster also knows that Sturgeon only has one more throw of the dice. If she lost another referendum the issue really would be lost for a generation.

In Ireland, ministers believe they have a fall-back option to prevent the return of a hard border for people in Ireland. A system of free movement has been a feature of Ireland since partition. It was recognised in EU law by Protocols 19,21, and 21 of the Treaty of the Functioning of the EU.

With these seeming safety nets in place, May became complacent. Her conference speech announcing hard Brexit was aimed not at holding the nation together, but at safeguarding internal loyalty in the Tory party. She may have had good reason for that. Barely a day goes by without a Cabinet minister leaking whatever their current favourite dreamland Brexit plan is to the media. Most of them bear no resemblance to anything Europe would accept. They are less like Cabinet secretaries than school children playing Model United Nations. But regardless, their actions show how tenuous May's power is.

This approach led to the Institute for Government today issuing a stark warning that May is risking a "full-blown constitutional crisis" by her approach to the nations of the UK.

They are right. As with so much else, May has utterly misjudged her position. She has prioritised internal party management over the health of Britain.

Four-nation #Brexit: How the UK and devolved governments should work together on leaving the EU: https://t.co/eSMdFbhszs pic.twitter.com/uoy9tRWN0E

There was so much she could do. In Scotland, for instance, leaving the EU involves the devolution of agriculture and fisheries back to Scotland. These were anyway devolved matters, but because they came under EU jurisdiction, Holyrood and Westminster had to follow the same policies. It might go against Britain's constitutional convention for May to block that transfer of powers, but she has it within her power to do so. By guaranteeing that she would allow it through, she would have some crucial leverage over Sturgeon, which she could use to push her away from a referendum she privately is not interested in holding.

May could also offer both Scottish and Northern Irish leaders a role in the great repeal bill, as it gradually went over EU law in the years after Brexit and repealed them. This would essentially add up to devolution plus.

Instead, the prime minister has closed her ears to Scottish and Northern Irish concerns and pushed ahead with the most radical possible interpretation of the vote, while adopting a form of harsh, ugly anti-foreigner rhetoric which further alienates the SNP.

In Ireland, it is English anti-immigration sentiment, more than Brexit itself, which threatens the return of a hard border. And yet May, far from trying to control it, has validated and encouraged it.

Once Britain leaves the single market and customs union, there will have to be checks for goods on the Irish border, to ensure they have the right classification for tariffs. Their components need to be assessed to establish whether they are in compliance with 'country of origin' rules. They must also be tested to see that they live up to single market standards, which will be even more laborious and complex. Some workers may find that their Northern Ireland qualifications are not valid in the Republic of Ireland. There may be similar problems with pensions. All this can be prevented, but it would take time and intelligence, two qualities which the Bexit ministerial team have not so far demonstrated.

The emergence of these checks will come amid continued English fixation over immigration. And there’s the problem: the Republic of Ireland will still have freedom of movement. All the Polish and Romanian plumbers who Brexiters are so concerned about will still be able to freely travel there. And from there they will be able to get to Northern Ireland over an open border and from there into the UK.

How long will it take for right-wing tabloids to start whipping up hysteria over this flow? It does not matter whether it is real or not – presumably no more people will use this route to illegally work in the UK than will use the rather simpler route of overstaying a tourist visa. What matters is that it provides easy fodder for the prowling moral lunacy of the right-wing tabloid press.

None of this is necessary. May could have tried to heal the dangerous wounds of the Brexit vote by pursuing a moderate strategy which kept the UK in the single market, while giving the devolved assemblies genuine roles of substance in the Brexit process, instead of the belated promise of monthly meetings with Davis.

But she chose to confirm every part of the nationalist narrative: She pays no attention to the wishes of the British nations, she pays them no respect, she fobs them off with meaningless meetings while making all the key decisions without consulting them, and she does nothing to calm the growing English nationalism and xenophobia whose political currents put the United Kingdom at risk.

May thinks she has the strategic advantage. In fact, she is largely frittering that advantage away while poisoning the relations between the nations of the United Kingdom.