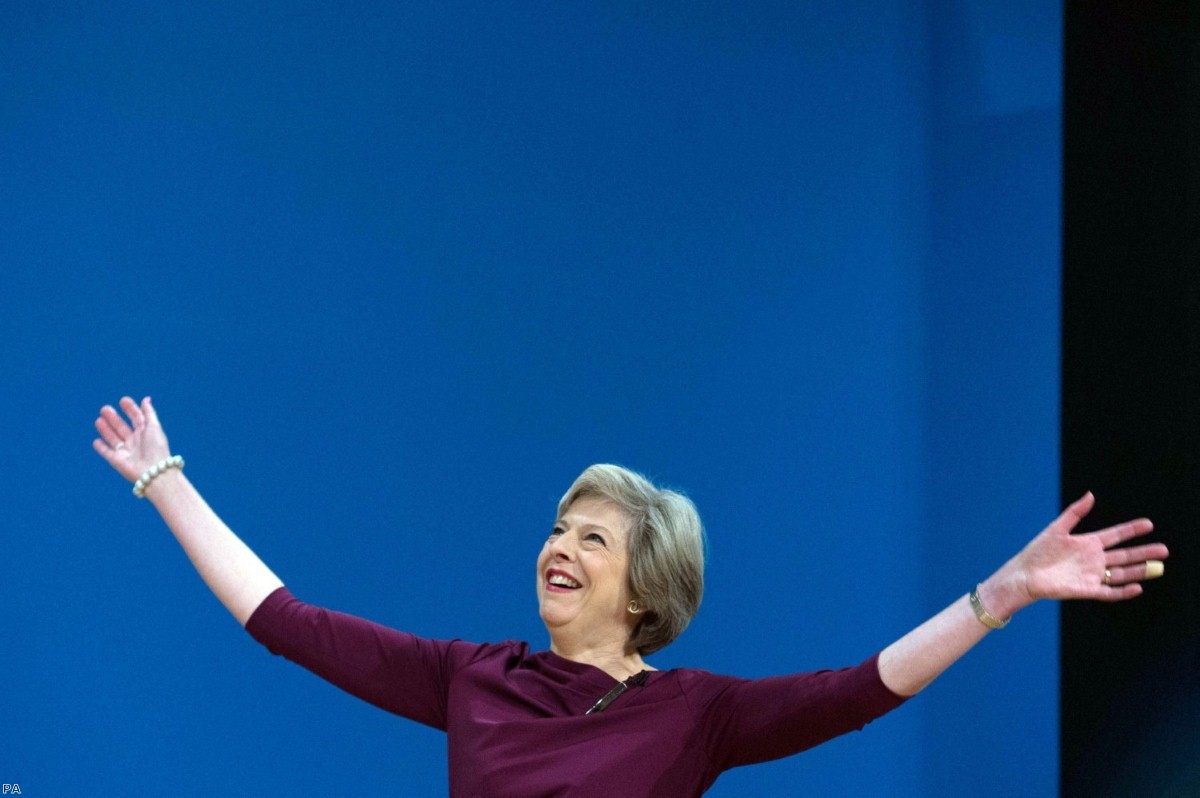 Yet as today's prime minister's questions clearly showed, there are several reasons why the Tories are actually in a much more vulnerable position than this suggests

The first point to understand is that this is almost certainly the high water mark for her government. With Brexit negotiations not yet even underway, May is able to dismiss all questions about what exit from the EU will actually look like as being unpatriotic attempts to ignore the will of the British people.

As she told Corbyn repeatedly today: "Unlike the right honourable gentleman we think that we should deliver on what the people want."

But while this approach may chime with the kind of attacks on 'Remoaners' we saw on the front page of today's Daily Mail, it is a trick that can only be deployed for a limited amount of time. Yes the British people did vote to leave the EU, but they certainly did not vote to plunge the UK into a period of recession and international decline. And as the continuing collapse of sterling has shown this week, the sharks are already circling the UK economy. And pretty soon the prime minister is going to have to find a serviceable life raft.

With the Labour party in such obvious bad shape, the Tories may believe that doesn't matter quite so much, but there were signs today that things could be about to turn against the government there as well. Jeremy Corbyn's last PMQs, where he highlighted Tory divisions on Grammar schools, was widely regarded as his best yet and today he proved that this was not simply a fluke. He actually is getting significantly better at these sessions. Not only were his questions prescient and topical (rarely a given in previous sessions) but they also showed a new level of message control. A couple of times today he referred to the government pursuing a "shambolic Tory Brexit".  I understand this is a deliberate attempt by Corbyn's team to move away from the use of the terms "hard" and "soft" Brexit – the fear being that most voters will see the former word as inherently more appealing than the latter. This may seem like a small point, but it matters. At the very least it suggests that Corbyn's operation have learned from some of their mistakes in the past.

And as Corbyn's largely positive reshuffle has shown, Labour may be down but they are certainly not out. The risk for May is that her opponents finally start to get their act together just as the nightmare of Brexit negotiations start to become clear.

It's not just Corbyn and Labour that May has to worry about. Both Lib Dem leader Tim Farron and the SNP's Angus Robertson joined Corbyn in asking important questions about the "xenophobic" anti-immigration policies now being pursued by May and her government. The Lib Dems have been viewed by many as an irrelevance since their heavy defeat in last year's general election. But recent council by-election results in Tory-Lib Dem areas suggest that the party are starting to recover some of the ground that they lost. You can tell that there is a changing attitude to the Lib Dems by the way that Farron was so deliberately shouted down by the Tory benches today.

And even if May feels comfortable dismissing the combined pressure of Farron, Robertson and Corbyn, she will have a much harder time dismissing the growing voices of British businesses deeply concerned about the government's determination to take the hardest and most economically ruinous form of Brexit. The co-ordinated warnings from British business leaders this week is just a taste of what we are likely to see if May continues down the path she is now taking. When even Jeremy Corbyn is able to pose, as he did today, as being closer to the views of British business than a Conservative prime minister, then it's clear that May should be seriously concerned about the backlash the government's hardline Brexit stance is likely to inspire.

But ultimately it is neither politicians, nor business leaders that should really concern May, but the British people themselves. So far the collapse in Sterling has not led to a significant rise in inflation as retailers have largely absorbed the increased cost of imported goods and materials. That is not likely to last for long. When inflation does rise it will be people on the lower half of the income scale who will feel it the most – the very people who Theresa May has devoted most of her premiership trying to win over.

Taken individually all of these challenges can be overcome, but taken together they amount to a potential political nightmare for May and her government.

The prime minister may look content right now as she bobs peacefully among the wreckage of her opponents. But beneath the water the sharks are already circling and it is May, rather than Corbyn, who they are now eyeing up for their lunch.