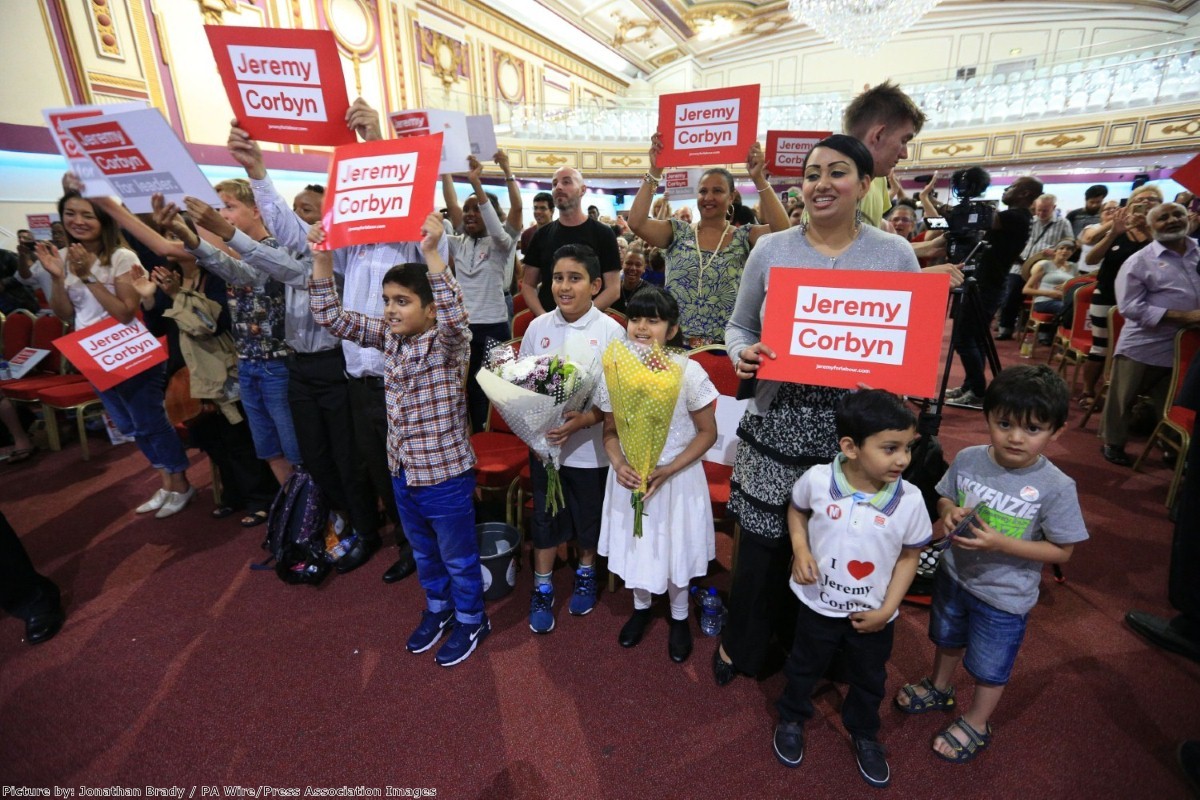 There are many reasons Jeremy Corbyn will win the Labour leadership contest later this week. The huge influx of new left-leaning members and the weakness of his rival candidate both mean that he should be comfortably re-elected as Labour leader on Saturday.

But the other major reason for Corbyn's continued supremacy is the cack-handed and self-defeating nature of the attacks his Labour opponents have made against him.

This can be seen most clearly in the controversy today over plans by Momentum to set up a network of children's groups for Labour activists and their children under the name "Momentum Kids".

In a statement sent out last night, the Corbyn-supporting group explained that: "Momentum is to launch a nationwide initiative to increase the involvement of children, parents and carers in Momentum and the Labour Party. Momentum Kids, originally set up by two mothers in Stroud, will expand across Momentum's network of 150 local groups, ensuring that single parents and sole carers have access to cooperatively run breakfast clubs, after school sessions and child care they need to facilitate their political engagement."

It is hard to think of a more benign initiative than this. In a country where the majority of senior national, and even local, politicians are middle-class, middle-aged men, any attempt to make it easier for women and single-parents to get involved in politics can only be a good thing.

Yet rather than welcome or even just tactfully ignore the announcement, Jeremy Corbyn's opponents have decided to spend their time mocking it as some sort of attempted mass-indoctrination programme. With hashtags including #tinytrots and #childlabour, they have attempted to link the programme to everything from Chairman Mao to North Korea. People who just days ago were calling for the expulsion of Ken Livingstone for invoking Hitler have become suddenly totally unconcerned about making Hitler Youth comparisons in relation to Momentum.

Leaving aside the absurd comparison between some of the most sinister regimes in history and a proposal to set up creches for the children of Labour activists, the attacks also reveal the systemic weakness of Corbyn's opponents. Over the past year the Labour party has turned into a mass movement, with hundreds of thousands of new members joining the party. Rightly or wrongly, these new members have been inspired both by Corbyn himself and by the community of Labour-supporting activists and groups around him.

It is understandable that many long-standing members must feel anxious or even resentful towards such a movement, especially when it has helped to elect a leader who most long-standing members do not want. When some of these newer Labour members are involved in the abuse and intimidation of MPs and councillors, it is also perfectly legitimate for Corbyn's opponents to criticise him for failing to get to grips with the problem.

But increasingly these legitimate criticisms and concerns have spilled over into an almost automatic sneering and mockery directed towards anything and anybody associated with Corbyn and his supporters.

Of course there's nothing wrong with mocking politicians themselves. When Corbyn put his name forward for Labour leader, he also put himself forward for years of derision, mockery and scorn. Laughing at our political leaders is an inevitable and even healthy part of British politics. The lack of deference towards our leaders is something that has long been inherent in our political culture and which I actually think is a good thing.

But if at some point you find yourself sneering at two mums who have set up a childcare project in Stroud simply because they happen to support a different Labour leadership candidate to you, then it really is time to look in the mirror and ask yourself whether this will really advance your cause.

Corbyn's biggest success in this election has been his ability to sell it as a contest between a sneering out-of-touch Labour establishment and a mass of ordinary political activists. Rather than attempt to counter this narrative, Corbyn's opponents have increasingly seemed to confirm it. Whether it's the derisive attitude towards Corbyn's supporters, the repeated attempts to exclude Labour members from voting, or Owen Smith's comments about the potential expulsion of Momentum from Labour, Corbyn's opponents have repeatedly given him exactly what he was looking for.

Of course there are legitimate criticisms to be made against the movement around Jeremy Corbyn. But attacking a small group of otherwise unknown activists for the crime of trying to help mothers and single parents get involved in politics clearly isn't one of them.