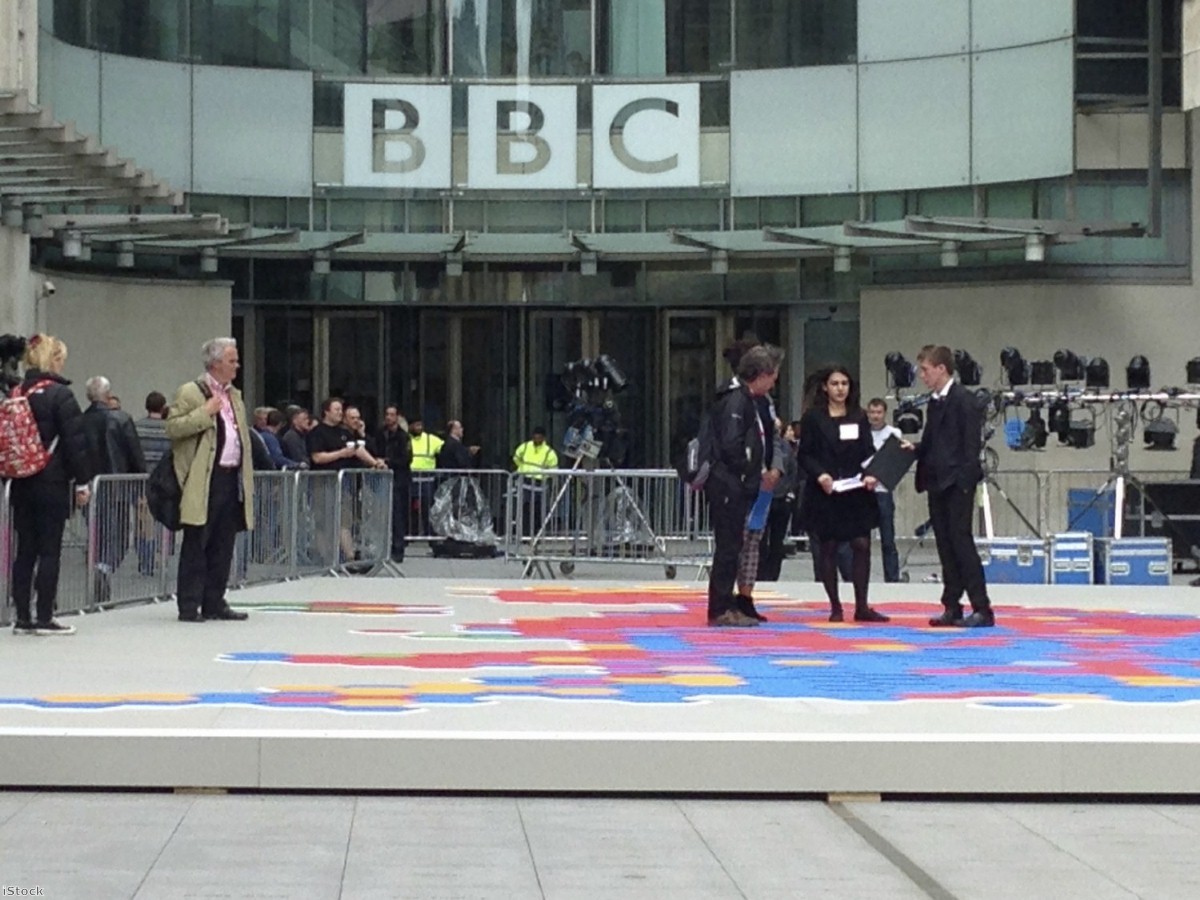 The activist left is conspiring in the demolition of the BBC

"In the week in which our secretary of state John Whittingdale described the disappearance of the BBC as a tempting prospect, I'd like to say a few words in defence of that organisation," Wolf Hall director Peter Kosminsky said last night, as he picked up his Bafta.

What followed was an old-school left-wing defence of the BBC, which somehow the left has become too complacent to understand or express. This is a public broadcaster, independent of government, Kosminsky explained. It's owned by and answers to the public – not shareholders, not No10, and not advertisers. Without it, "the only determinant of whether something gets made is if it lines the pockets of its shareholders".

He finished: "We should stand up to fight for it. And if we don’t, blink and it’ll be gone."

But far from fighting for it, the left is actively colluding in its extinction. For the entirety of last week, it was impossible to open Twitter or Facebook without someone demanding something of BBC political editor Laura Kuenssberg. Most demand that she be sacked. Sometimes they demand an inquiry into her supposed bias. Occasionally they angrily ask her when she'll be covering a story which is critical of the Conservatives.

A current petition doing the rounds demands an independent enquiry into whether she is biased towards the Conservatives. "Should the independent review find Laura Kuenssberg to have been less than impartial and/or find her to take a partisan position we would ask that she is moved to a role that is more suitable," it says.

A similar petition which has been around for most of 2016 currently has 33,000 signatures. Another set up in the wake of the on-air resignation of Labour MP Stephen Doughty, which was absurdly interpreted as some sort of BBC attempt to topple Jeremy Corbyn, has 15,000.

These petitions all benefit from extensive coverage in The Canary, a kind of left-wing Private Eye for idiots, which directs its readers towards them with a take-away order of waffly innuendo about conflicts of interests and Tory sympathisers at the top of the BBC.

The fixation on Kuenssberg is interesting. One naturally suspects that a sort of reflexive sexism is behind it, although to be fair Nick Robinson faced similar attacks when he was BBC political editor, including protests in Scotland whipped-up by then-SNP leader Alex Salmond, who cynically manipulated this strain of left-wing anti-media activism to try to threaten Robinson into producing more sympathetic coverage. John McDonnell, Labour’s current shadow chancellor, sometimes plays similar games.

The targeting of Kuenssberg probably has more to do with her being in this prominent position after the election of Corbyn, when whole swathes of the activist left appear to have fundamentally lost their minds. The response to the BBC's coverage of the local elections has been particularly depressing. The coverage by the BBC – and the rest of the media, as it happens – has been been broadly fair. Corbyn’s party avoided any sort of humiliating drubbing at the polls, but the results suggested the party will perform poorly at the general election, given the historical precedent. This is the truth, on a basic statistical level. And it is broadly the line the media has taken.

But for the activist left, anything other than full Iskra-style subservience to the message of Labour HQ was clear evidence of Tory bias. They have reached the intellectual level of a two-year-old child who refuses to recognise that there exists anything in the world except his own desires. The only media coverage which is tolerable is one which exactly resembles the insides of their own head. All else is conspiracy. We are witnessing the infantilisation of the activist mind.

This coverage is often given some degree of context with a Cardiff University study of BBC impartiality, which showed that the Tories were typically given more airtime, that business representatives outnumber trade unionists, and that stockbrokers, investment bankers and hedge fund managers were given more opportunities to speak than civil society in the wake of the financial crisis.

The right laps it up. They do their own Mickey Mouse research into the BBC. Late last month the IEA, a usually broadly respectable free market think tank, published the most ludicrous report into the BBC showing – you guessed it – precisely the opposite bias.

Brexiters are underrepresented on the Today programme, business leaders interviewed during the general election are typically on the side of Remain, Thought for the Day – the mini religious sermon broadcast each morning – is unacceptably socialist and expresses "negative opinion on capitalism, markets and business". And on and on it goes, like the ravings of a lunatic in an attic, written in crayon and then howled at the moon.

And what is the best solution to all this, the IEA asked? Well, privatisation of course. "The BBC is no longer fit for purpose," the think tank found. "Its market power – especially in terms of news provision – coupled with its compulsory funding method and its closeness to the political process is hugely problematic."

The right are loving every second of this left-wing act of self-harm. It's instructive to look at the Daily Mail coverage when that petition was released calling for resignations following the Doughty resignation. It did not rail against hippie leftists or mock their conspiracy theories about trying to destabilise Corbyn before PMQs. It was supportive.

That's a smart move, because right now they have an opponent of the BBC right where they want him: as media secretary. The primary interest the activist left seems to have in Whittingdale is when a conspiracy theory about his love life and the tabloids activates their X-Files radar. But when you get away from the smutty innuendo and brazen moral hypocrisy of that row, you find there is more than enough evidence to condemn him by his own deeds.

Whittingdale is a dangerous opponent for two reasons. Firstly, because there is evidence that he really does want to destroy the BBC. After all, he was recently quoted as saying that the idea of it going was a "tempting prospect". It was a joke, but a revealing one, given the other cut-and-paste right-wing stereotypes about the corporation he engaged in at the same event. Secondly, because we cannot rely on a word he says.

Whittingdale said there were no plans to privatise Channel 4. "The ownership of Channel 4 is not currently under debate," he told a festival last summer.

Just one month later an official was pictured entering Downing Street with a document laying out options for precisely what Whittingdale said was not being considered. "Work should proceed to examine the options of extracting greater public value from the Channel 4 corporation, focusing on privatisation options in particular,” the document read.

It wasn't true. Department of Culture Media and Sport officials had failed to open a file with 6,085 digital responses from readers of the Radio Times. They never even requested the password to open it. After all, they were Radio Times readers. One can safely guess the type of favourable view they might have about the BBC.

Given this level of deception and Whittingdale's stated views towards the BBC, we might look with some suspicion at the daily drip-feed of anonymous briefings against it from government officials. David Cameron wants the BBC charter reviewed every five years instead of ten, presenters' salaries will be made public, the BBC will be prevented from showing popular shows at popular hours, more moves will be taken to stamp out supposed 'political bias', the BBC will be forced to put out all production contracts to competitive tender, effectively privatising it from within.

.@DavidLammy says "the bad blood we are seeing between Whittingdale and the BBC is unprecedented" #Murnaghan https://t.co/eYd4aTIGcs

Who knows how many of these are real plans, how many are there to expand the scope of reform negotiations in the government's favour and how many are merely being put out there to chip away at the BBC's confidence and smear its reputation ahead of reform? We certainly can't rely on the nonsense being peddled by the secretary of state. What we can be sure of is that the BBC is under attack by a hostile government. And you don't need imaginative conspiracy theories to know that. You just need to read what people are saying.

But instead of protecting the BBC, the activist left is actively destablising it. This is one of the last organisations standing which delivers on a commitment to public service, rather than the demands of shareholders. It provides a key safety net of social cohesion in a country increasingly divided into ghettos of class and identity. Its public ownership model gives the public a say in how it is run – one which they will never get when the closed doors of corporations are the sole providers of entertainment and news content. The widespread admiration for it is a daily reminder to free market fundamentalists – which incudes almost all of the political class but no-one else – that they do not have the answers to everything. Nor indeed many things.

The BBC is loved by many, but defended by few. It will be a travesty if the government which finally dismantles it does so with the connivance of the activist left. As Kosminsky said: if you don't fight for it, "blink and it'll be gone".