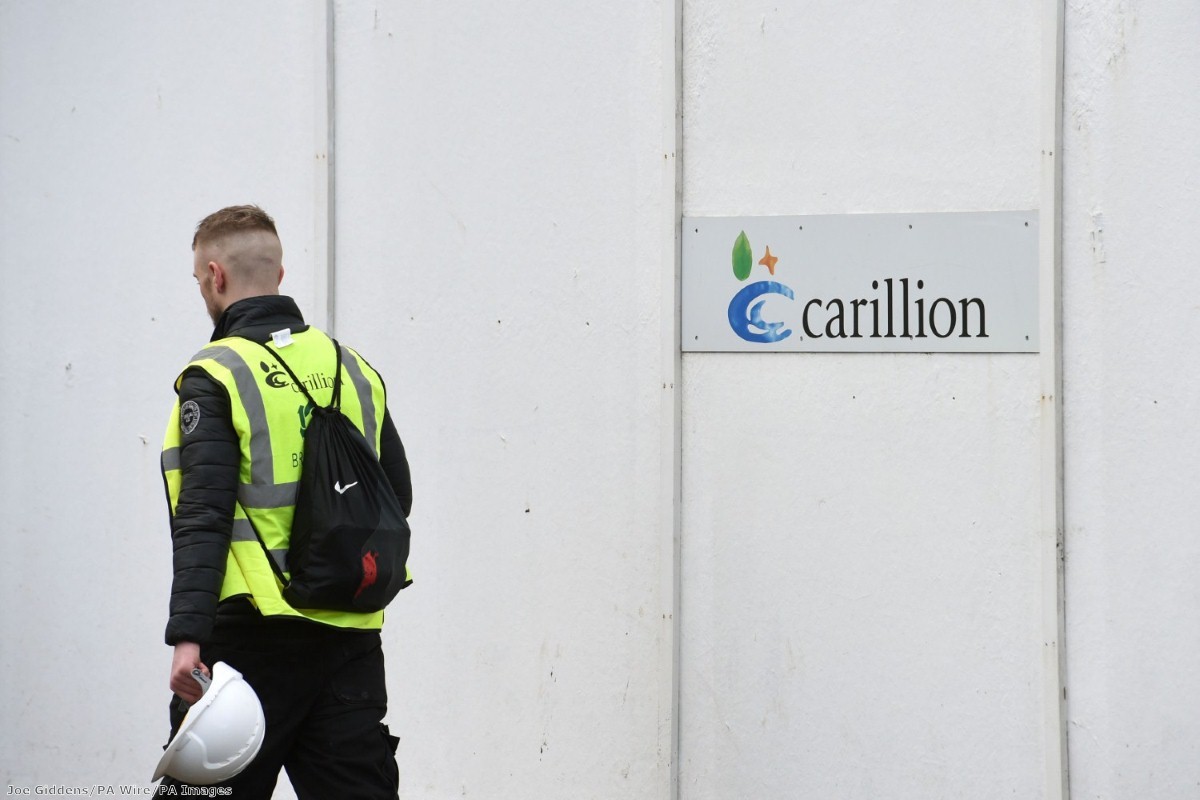 They can't say they weren't warned.

From the earliest days of the private finance initiative (PFI), journalists and trade unions warned of the timebombs that were being laid beneath the public sector. Stories of failure and waste have been legion for two decades. The issue finally blew up when austerity squeezed hospital finances under the coalition.

But even then the show went on, this time rebranded as 'PF2'. Same firms, more deals. Infamously, Carillion issued a profit warning last year, with severe questions even then over its prospects for survival. Still the contracts rolled in.

The political, social and financial contagion of Carillion's collapse will unfold for some time, but it has already dealt a hammer blow to the marketisation mania that has dominated public service delivery for the last 30 years.

Carillion doesn't tell us why it failed. It is just one example of how.

There was a time when state ownership extended into what we would now consider the private sphere – airlines, cars, steel. It was never the radical dream of state control of the 'commanding heights' of the economy, but nevertheless the extent of it is unimaginable in Britain today.

By 1990 this had all changed. Thatcher's privatisations are most keenly remembered for the utilities that were sold off – water, electricity, gas – largely because they later proved unpopular. There is no public demand for the return into state ownership of British Airways.

But British Airways exists in a genuine marketplace. It is not what most people would consider a 'public service', nor an everyday 'utility'. There are multiple airlines, offering different fares and destinations. People spend their own money on them from their disposable income, generally as a matter of choice. From that money springs profit. We don't think of it as 'marketised' or 'privatised' – it's just a private market. It looks like one because it is.

The list of marketised or privatised public services becomes exhaustingly long before it becomes exhaustive. There is barely an area of social provision that has been left untouched by the ideological frenzy of the last three decades.

But here's the thing – we have marketised services without creating markets. Most of the privatised utilities have descended into regional monopolies or oligopolies, but outside of that, the 'market' for provision of public services is not a genuine market at all.

A genuine market has customers – individuals or corporates – spending their own money from a choice of providers. I choose a supermarket, and choose items within it. A company chooses a supplier of goods. Money is paid, profit is made. Marxists aside, this is not controversial.

What happens in our marketised public services is different. The government requires a service. A charity or company – often selected from a limited sphere of options – provides it. Taxpayers' money is handed over. Many of these providers are heavily dependent on this source of funding. The private sector providers make a profit from it. But throughout, the taxpayer is on the hook – if something goes wrong, the taxpayer pays.

These are fake markets, and they proliferate in Britain's social state. There is no natural, genuine market mechanism. Market sectors spring up purely to suck at the government teat. Providers demand assurances that a lengthy 'pipeline' of government-funded projects will be offered to them to make it worth their while to even bother offering the services that until then the government had provided itself.

PFI is a perfect example of this. It uses a form of funding called 'project finance'. This is a system where projects are financed through loans which are then repaid from the profits the projects make. So, a company borrows money for a coal mine – the profits from selling the coal will repay the loan while making a profit on top. It all makes perfect sense.

PFI is different – it takes project finance and applies it to public projects. But where is the profit? Hospitals do not make a profit. Nor do schools. Nor do roads, unless they are tolled. Instead the 'profit' comes from the government – the public sector pays out. One of the arguments for involving the private sector is that it 'shares' the risk of failure – but as Carillion shows, in reality it doesn't. When times were good, the money went to Carillion. When the government stopped paying enough, the service must still be delivered and the taxpayer is left holding the baby.

The core idea behind this process is that the private sector is more efficient than the public sector. But this assumption – born of pure ideology – has a huge logical flaw. Pre-PFI, the government would borrow cheaply to pay a private contractor to build its project. Subsequent operations and maintenance would be provided by the public sector. The only profit margin was that of the construction firm.

Under PFI, the private sector shareholders take a cut. The construction firm takes a cut. The banks take a cut. The outsourced operations and maintenance firms take a cut. At every stage, over the course of decades, someone or other is taking a cut – and that cut always comes from the taxpayer.

Competition can lead to greater efficiency – and to greater corner-cutting – and yes, the public sector can be, and has been, inefficient. But the idea that private firms are so much more efficient than the government that this efficiency can outweigh the multitude of profit margins the taxpayer must cover is a logical fallacy. It doesn't work in theory and, as we can see, it doesn't work in practice. When, as with Carillion, the government started demanding major efficiencies, the whole edifice came crashing to the ground.

PFI is a specific form of marketisation. There are many others, and, as ever, the markets are fake. They are fake because they are entirely dependent on the taxpayer.

Take adult social care. The last decade has seen councils shut down their own care homes and replace them with publicly subsidised services, provided by charities, 'social enterprises', and private companies. For a while the going was good – so good, in fact, that private equity cowboys rode in, confident of making a killing off the taxpayer.

Then came austerity. Swingeing cuts to local government funding were passed onto care services, and therefore care providers. One particularly badly run provider, Southern Cross, went bust. Four Seasons, which took over many of Southern Cross' care homes, is now itself in trouble. Charities are against the wall. Without government money, the 'market' disappears in a puff of smoke. You'll find a more bona fide market at your local jumble sale.

Underpinning all this is a basic fact that governments of all colours have tried to wish out of existence: Things cost money. Neoliberal dogma holds that the public sector is inefficient, that markets know best, that necessity is the mother of invention, that 'choice' is everything and that the expertise of public sector workers should be discounted against the whims of corporate directors.

It is nonsense. Those 'markets' weren't markets. That 'choice' was fishing from a puddle. Those costs weren't inefficiencies, but the real costs of delivering real services. Public sector workers, who had delivered services for decades, knew about public services.

Reality does not bend. Public services are not profitable. They are forms of redistribution, not wealth creation, providing life's necessities to people who could not afford it themselves. Because of this, they can never be run as competitive consumer markets.

Is this a watershed moment? It could be. Or maybe the Adam Smith brigade will succeed in arguing this is 'one bad apple', that the contracts were the problem, and that the civil service is to blame. In which case, we'll be back here in a few years' time. That would be tragic, because while the markets are fake, the pain is not.