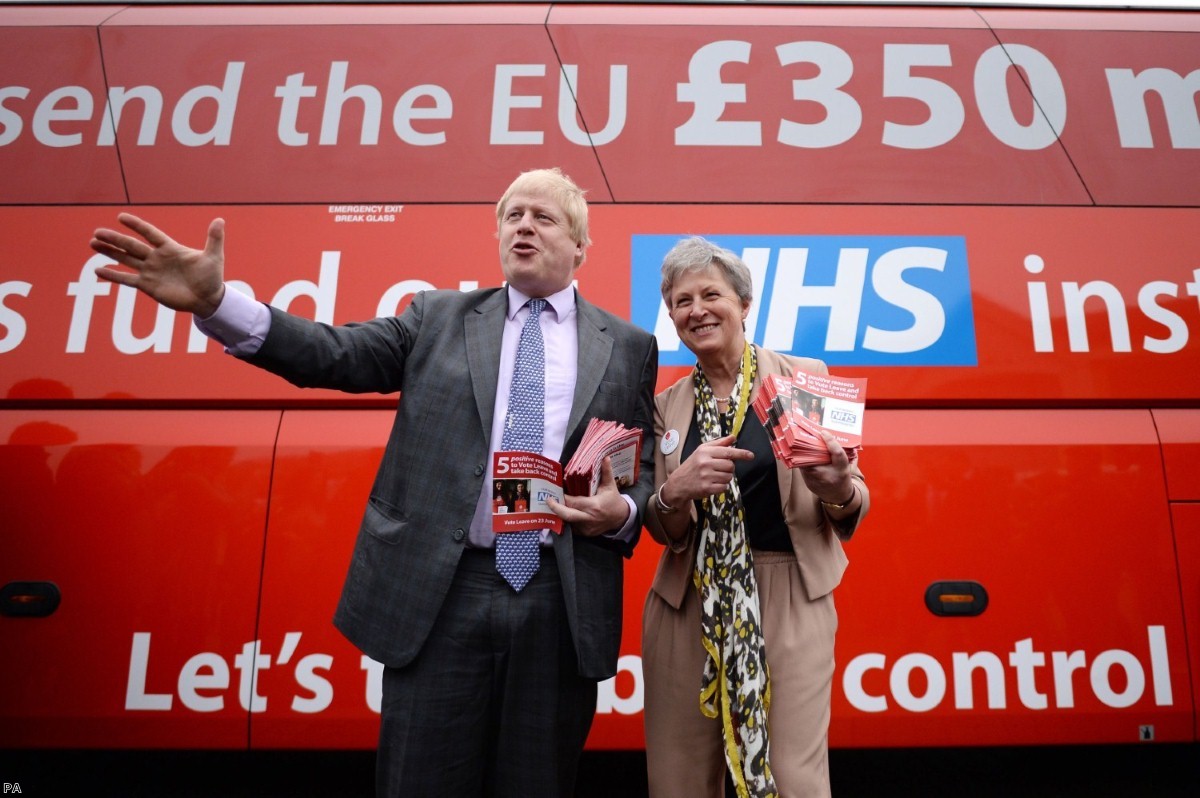 Brexit lies and how to fight them

Deception carries a huge premium in political campaigns. The stakes are very high and penalties disproportionately low, because after the event it's usually too late to do anything about it. This is nothing new. The Art of Political Lying, from 1712, describes how uncovering political deception is like being "a physician who has found out an infallible medicine after the patient is dead".

The EU referendum was new in a number of very 21st Century ways though: the influence of Twitter and Facebook, the rise of the robots, and information warfare. There were also concrete, political differences that multiplied the premium for deception. As the Express shouted, it was a "ONCE in a LIFETIME" event.

It is unsurprising, then, that there has been so much deception surrounding Brexit. But just how many Brexit 'lies' actually are there? If Leave or Remain supporters call something a lie does it take us any further than signalling disagreement or disapproval? Can the word 'lie' still be a meaningful, useful term in post-truth politics?

Conventionally (in philosophy and social psychology), a lie has to satisfy four conditions. It must be a:

If we correctly classify a lie it takes us beyond just describing the properties of a statement. It is also a comment on the liar. A lie is a breach of truth in relation to a specific matter and it is also a breach of shared conventions, or legitimate expectations about communication.

Lots of Brexit 'lies' are not lies using these conditions. We could substitute other terms: bogus, fantasy, misleading, nonsense, bullshit and – perhaps more accurate and underused – propaganda, but it is helpful to consider why lie might not always fit.

A big problem classifying Brexit 'lies' relates to condition (i). It is hard to establish intent. Someone could make a false statement but believe it to be true. With complex topics, people can can plausibly claim to have been mistaken or perhaps to have tried to convey the spirit of a message even if it wasn't entirely accurate. Trying to attribute intent is hugely problematic, which is why lies so often become 'tangled webs'. Liars often tell two lies – the lie itself, and then a lie to cover up the fact they lied.

In terms of condition (ii) many Brexit 'lies' are not strictly false. Some are 'truth apt' – potentially true or false at a later date. An example is David Davis' claim shortly after the referendum that "before the negotiation with the EU is likely to be complete… we can negotiate a free trade area massively larger than the EU". On the other side of the debate, the Treasury's figure of British households each being £4,300 worse off was also truth apt, but projected forward 15 years. It was so far removed from present reality as to be dubious.

Many Brexit 'lies' cannot be defined as false' because they include terms that are vague or have no meaning, or can mean different things. We do not have agreed definitions of 'control' or 'reformed EU', for instance. Such statements are not meaningless exactly, but they are often not truth apt. Rather like the centre of a wordcloud, they refer loosely to a bundle of related ideas. Some of these are incoherent, so we may first need to unpack them and pin them down before justifying the label "lie". One example is the claim we can take back control soon – when doing so means having to copy existing agreements, which in itself deprives us of control.

Brexit 'lies' are often not attributable (iii) statements. Leave and Remain were loosely bundled cross-party movements combining elected representatives and less accountable figures, such as those in business or entertainment. Both camps could promise things that would not commit them in the same way a manifesto would have.

Finally, condition (iv) shows lies are intersubjective – lies require a liar and someone who is being lied to. People do not like to admit to having been deceived, so may be unwilling to label another person a liar.

It is therefore hard to pin down Brexit 'lies'. But this approach does suggests six ways to sharpen the label.

Campaign statements often have no one author. This means people can associate themselves with a false claim at the same time as distance themselves from it. Figures in both camps were able to say, essentially, 'those were not my words'. In response, we have to pin down their words.

Anchor statements to the present

However unlikely a statement about a future Brexit scenario seems, it is not 'false'. If we are in search of truth and lies we need to secure claims about the present or the past. Unspecified talk of a Brexit dividend or a remote 15-year prediction are unhelpful.

A statement made in the past can be falsified but it need not be a lie, providing the person believed what they said at the time. Politicians often acknowledge they would say things differently 'knowing what I know now'. Asking people to update their claims is useful because it closes down the gap between past and present and reduces wiggle-room.

Ridiculing someone as incompetent makes it harder to use the label 'lie' in relation to what they say. It could be more helpful to attribute competence to someone and then be able to assert they made a knowingly false statement, rather than suggest they're a fool.

Interviewers seem motivated by trying to catch politicians out, but if we are interested in true statements there is no need to keep questions secret. Why not announce questions in advance of an interview, explain why they are answerable and identify beforehand what kinds of responses could reasonably be taken as deceptive? This means interviewers have to ask answerable questions, rather than – however much fun it may seem – questions they know cannot be answered.

It is tempting to mock people who have been deceived but it takes courage and integrity to admit this. Unlike the general election, where as many as 68% of votes were wasted, every referendum vote counted towards a national outcome. There were 2.9 million new voters, it is likely some were more easily deceived. The more who admit they feel lied to, the better picture we have of the work of liars.

Kevin Morrell is professor of Strategy and director of the PhD programme at Durham University Business School. His research interests include leadership and rhetoric. You can follow him on Twitter here.