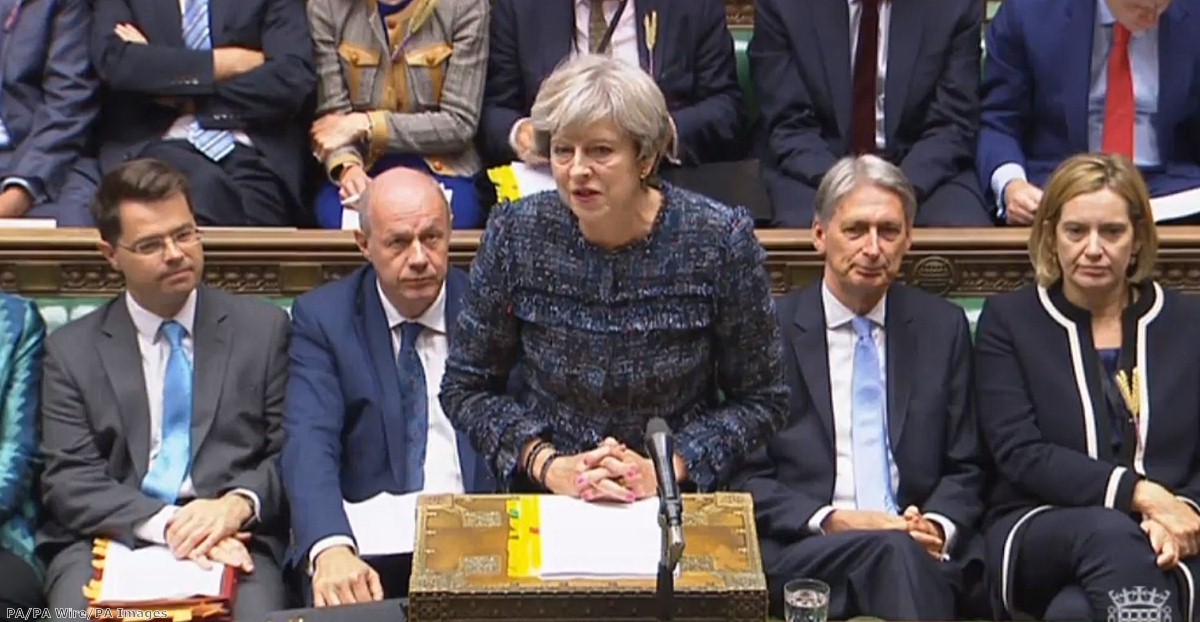 Week in Review: A zombie government with no ideas and no principles

The government might stumble on, like some executive zombie, but it will do permanent damage to the careers of those associated with it. Take its three chief actions this week: Stuffing the repeal bill with ministerial powers, rigging the committee system and awarding a one per cent pay rise to police and prison staff.

Put aside the relative decency of the policies in and of themselves. They all share a specific quality: They do not do the thing they are presented as doing.

The repeal bill is supposed to return power from a shadowy technocratic Brussels and return it to parliament. In actual fact, it eradicates the scrutiny of law which takes place at the EU parliament, then carries it over the heads of MPs so they can't scrutinise either, and hands it to ministers. It is against parliamentary scrutiny, not for it.

The committee motion whitewashes the general election result by building in a government advantage to the mechanisms of parliament. The prime minister who went to the country banging on about the 'will of the people' now uses obscure political initiatives to ensure it isn't represented in Westminster.

The decision to award a limited public sector pay rise is presented as a move away from austerity, but the raise is below inflation, which came in at 2.9% this week, and will anyway use money from existing budgets – meaning there will have to be cuts to other parts of the service. This isn't an end to austerity, it's a demand that services change the area being hit. Politically, it is a classic self-harming fudge: You confuse the public about your approach to an issue and do nothing to neutralise your opponent.

In each case, we're reliably informed that people don't read enough detail to notice this stuff. You do, because you're the kind of person who visits specialist political websites. But your average voter just glances at a headline.

Maybe. But polls suggest people now prize integrity above other values, such as strength. They want politicians to be genuine and stick to their convictions. Even without all the details of how a standing committee works, or what a statutory instrument is, they hear the mood music: of a government doing the opposite of what it says it is doing, of shady moves in late night votes, of small-print politics.

After all, there is no other story to tell. The government has no message, no purpose, no reason to exist except the muscle memory of wanting to remain in power. It's like hair growing on the scalp of a corpse. There is simply no political agenda at all, on education, or health, or social care, or the economy, or transport. On anything. Theresa May can't deliver it.

There is only Brexit. That is the sole function of government. But even here there is really no clarity. Philip Hammond is not working in the same government as Liam Fox in any meaningful way, no matter how many joint bylines they put out. There's no consistent Cabinet view on immigration or trade or customs or court jurisdiction or the withdrawal bill. The Fox-types clearly want some US-based, laissez-faire, low-standards, free market system detached from the EU. The Hammond-types clearly want some kind of bespoke EEA-type arrangement where the UK has equivalency with the Europeans in most of the economy. They don't agree on where they're going and they'd have no idea how to get there if they did.

And then at the top is May. A prime minister without authority is like a chair with no legs. It can't fulfill its function. There is no use for it.

Ironically, she does actually have a vision for Britain. It is a mean, ignorant vision, but it is undeniably a vision. She just can't enforce it, because she has no authority. Even her allies in the Tory party scoffed when she said she'd continue. She is a political shield, held up by those who would replace her, whose only function is take the damage for an insane policy they refuse to deviate from.

And that's how you get to where we are – a government with no policies, consciously implementing a grand act of national self-harm, whose only other actions are to try and stitch together a constitutional arrangement which allows them to prolong the cycle. The individual news stories might pass people by, but the drip-feed of nihilism and self-interest which this government produces will make its mark. Those involved in it are unlikely to ever escape the reputation it earns them.