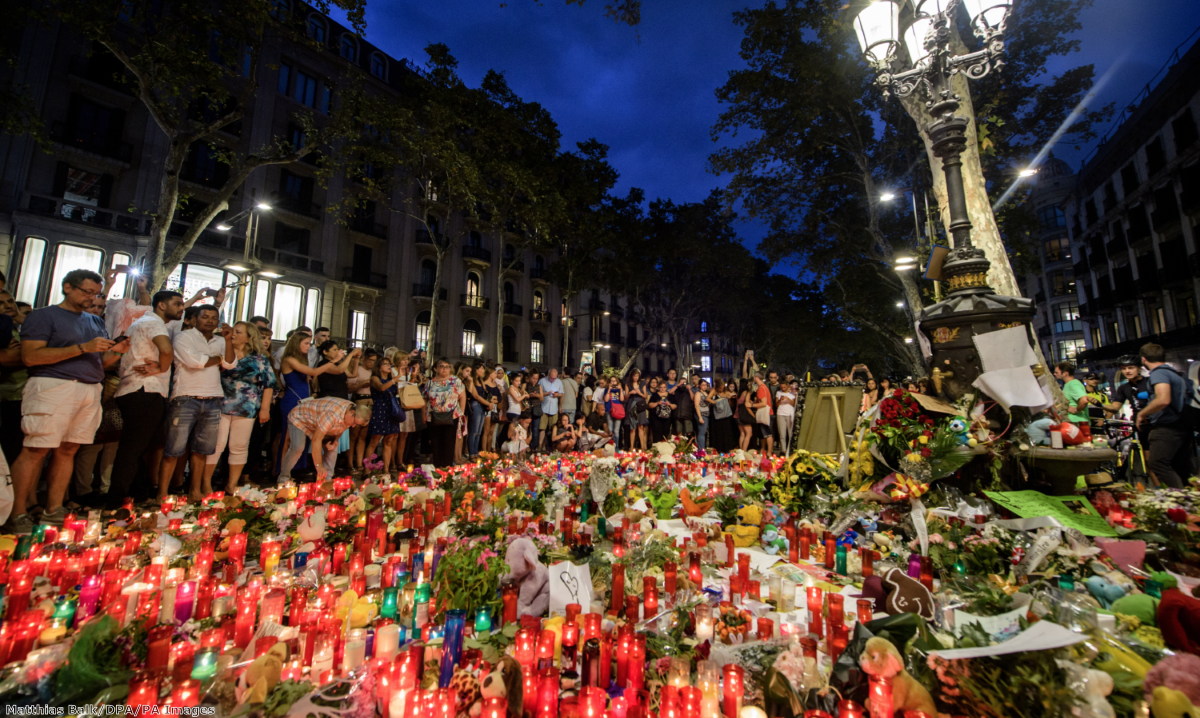 Sitting by the pool at our hotel near Barcelona I received a frantic phone call from my family worrying after what had happened on Thursday. We hadn't yet heard that terrorism had struck yet again in Europe.

We were all safe and the only challenge we faced was trying to keep the kids from watching the news. Nothing compared to the anguish faced by those at the scene.

What is telling this time is the difference in the reaction in Spain compared to some back in the U.K.

The local Spanish media reporting was excellent. Interestingly, all the female reporters at the scene and in the studios on Thursday were dressed in black. Flags flew at half mast, including those outside the hotel where we have been staying. Barcelona has in recent weeks been a hotbed of protest, including actions by anti-tourism activists and a strike by security guards at the airport.

After Thursday, the striking workers returned to work. Despite the impending Catalan independence referendum scheduled for October 1st, politics was put to one side. King Felipe, head of the Catalan government Carles Puigdemont, and Spanish prime minister Mariano Rajoy joined thousands of people in a show of defiance at the scene of the incident on Friday. The sight of these three leaders together would have resulted in booing from the crowd a week ago. On Friday, there was applause.

Rajoy and Puidgemont – who are not best friends – showed unity in a similar way that Sadiq Khan and Amber Rudd did in the wake of recent terrorist incidents in the U.K.

Puidgemont, even though he is in favour of separation for Cataluyna, said that any attempt to politicise the attack in Barcelona in relation to Catalan Independence would be outrageous.

Spain does not have its own version of Ukip, Nigel Farage or Katie Hopkins. After Franco, you will not find a Spanish politician talking the way Farage or Ukip do about immigration. This is despite the fact that Spain does have many of the factors which have proved fertile ground for the rise of far right parties elsewhere in Europe.

Spain's unemployment level, for instance, is over 20%. It is now much more heavily impacted than the UK by the refugee crisis. Over 600 people were rescued in one day last week off the coast of Spain. But you don't hear any talk of gun boats or the army being required by Spanish politicians.

Back home, of course, the reaction has been different. Farage ranted again about how our lives had been changed in the wake of terrorism and even claimed that European leaders were responsible for causing terrors attacks.

He has often cited freedom of movement as the reason for terrorist incidents in Europe. Yet his main supporter in the media, the Daily Express, was only recently railing against greater security checks and longer delays for British holidaymakers entering Spain. Which is it they want? More border checks or less?

Even on the more respectable parts of the right, there was hysteria. Richmond Park MP Zac Goldsmith yesterday thought it clever to retweet a purportedly humorous suggestion that Momentum might somehow be linked to those involved in Thursday's events. It was crass and insensitive when 14 and rising, including a seven-year-old British boy, are dead and 100 people are injured.

Maybe he got it from Labour's Momentum movement? They make for weird bedfellows, Islamism and hard-Leftism, but they're joined at the hip. https://t.co/4bYuahMx1H

This was not constricted to the right. Plaid Cymru leader Leanne Wood was equally clumsy in her comments linking right wing ideology to Thursday's events. She tweeted that the attack was "far right terrorism".

The moral of the story is that it is time that politicians in Britain learned to keep quiet after such events if they have nothing sensible to say. The actions of Farage, Goldsmith and Wood just bring us further embarrassment at a time when the UK needs allies more than ever. If they want a lesson in how to do it, they should look to how the Spanish have reacted.