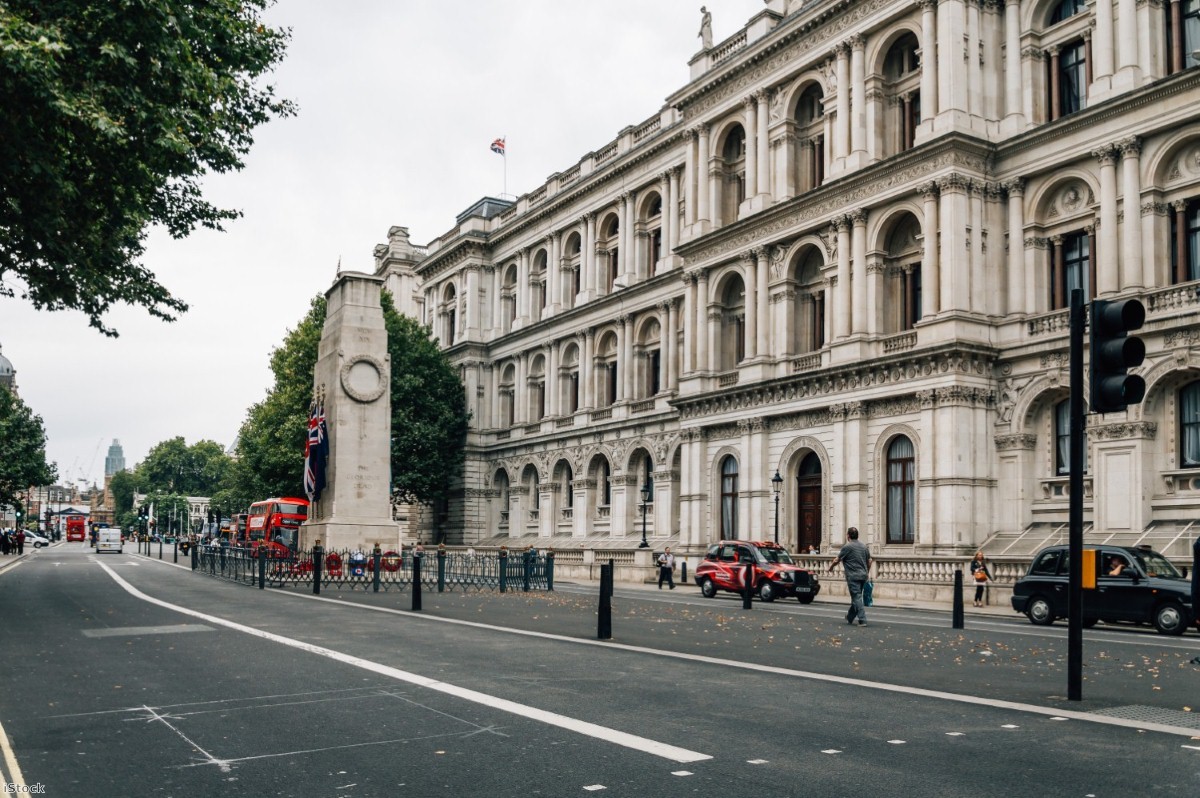 At a key moment in Othello, one of Shakespeare's characters exclaims: "I have lost my reputation! I have lost the immortal part of myself, and what remains is bestial." Right now you could mount the words on a plaque outside the Foreign Office.

For people, reputation establishes a legacy after they die, and delimits the amount they can achieve while still alive. For countries, it determines not only global standing, but their entire economic and political ecosystem.

The problem with reputation speaks to Brexit's broader irony: we don't have much control over it. That is, we can move to influence the perspective of others, but ultimately they will reach their own conclusions. Just as we can't force countries to trade with us, we can't force others to like us, respect us, fear us or think we're powerful when we're not. Foreign policy, and influence in foreign affairs, depends on how much other countries rate us and think we matter.

Whether through arrogance or incompetence, our government is trashing Britain's reputation by the day. That's not good for business – and it's certainly not good for influence.

There are three elements at play here: first, and most fixable, is the state of Britain's Foreign Office under Boris Johnson. (It is fixable by replacing him with someone serious and credible.) Second, the infrastructure of the EU's foreign and security policy. Third, and hardest to repair, Britain's global stature as a result of the referendum and subsequent political chaos. In all three cases, Britain is – as a certain president of ill-repute might say – losing badly.

Johnson was, as usual, playing the constructive statesman last week when he told the Commons that the EU could "go whistle" for its money in the Brexit negotiations – a scenario which would guarantee a no-deal outcome and full-scale dismantling of the economy. Perhaps the reason that EU negotiator Michel Barnier professed not to hear a whistle is that Britain is already whistling in the wind.

Johnson's unique rhetorical blend of arrogance, insult and empire-building has proven tiresome, foolish and toxic. His apparently endless reservoir of Second World War and Rule Britannia-themed metaphors for Brexit have served to alienate both the EU he dislikes and the Commonwealth he loves. The speechifying around 'global Britain' has met with particular derision – partly because the globe was insistent that it wanted to trade with Britain through the EU, and also because the Commonwealth isn't particularly interested in being re-colonised. Certainly, Johnson has almost no credibility in either Brussels or EU capitals. Arguably the prime minister might have anticipated that when she hired a chief diplomat who had just compared the EU to Hitler.

On the broader global stage, Johnson has distinguished himself chiefly as Europe's key defender of Donald Trump. While wiser heads were advising Britain to keep a respectful distance from the bucket of poison, Johnson (and Theresa May) opted instead to paddle in it. Far from being rewarded for our submissiveness, the Americans have simply demanded more – as when Johnson cancelled his trip to Moscow apparently at the behest of the US State Department. When, a few days later, Johnson's public appeal for sanctions against Russia and Syria were rebuffed by the G7, he exposed not only his diplomatic and strategic deficiency, but Britain's new weakness.

While Johnson has unquestionably damaged Britain's reputation and the reach of its foreign policy, it is as nothing to Brexit's institutional ramifications – specifically, withdrawing from the EU's Common Foreign and Security Policy (CFSP) and Common Security and Defence Policy (CSDP), which govern the EU's foreign policy coordination, and are only open to member states. Perhaps that was best illustrated a few days ago by the remarks of one of Johnson's predecessors, William Hague, to a House of Lords committee. Hague highlighted the value of cooperation with the EU on foreign affairs, and the dangers of fragmentation. He was duly praised for his apparently realistic evaluation of Britain's power and influence. But even he was seriously optimistic – for example in his suggestion that Britain could retain permanent membership of the EU's Political and Security Committee (PSC).

The PSC is one of the key bodies of the CFSP. It comprises an ambassador from each EU member state, and meets twice a week to deliberate on all aspects of European foreign policy. Their decisions are then passed to the Foreign Affairs Council, where the 28 foreign ministers, and the EU high representative, agree final conclusions. The PSC, like the CFSP more generally, is almost totally unknown at even senior levels of the British government, but is no talking shop. It makes key decisions on EU-wide security initiatives, sanctions and overseas missions, as well as determining the general direction of EU foreign affairs.

The conundrum of the PSC is much like Brexit itself. It benefits the UK to coordinate and promote shared interests with 27 other countries, including key world powers, and it benefits the EU to use British resources, clout and expertise while doing so. But when you ask PSC ambassadors and officials whether we could, as Hague suggests, remain permanent members or even permanent observers, the answer is almost a universal no. The PSC is one of the benefits of a members-only club. If you want to access the benefits, you take on the  responsibilities as well. Such is the basis for EU cohesion. It is unthinkable that Britain could abandon the pesky European Court of Justice (ECJ), financial contributions and freedom of movement, but stay in the PSC as though nothing had happened.

As for observer status, the only precedent for this is for accession countries. Before Croatia joined the EU in 2013, its PSC ambassador was not permitted to vote or even speak in the meetings, and was actually asked to leave the room during sensitive discussions. We may assume that the British would be reluctant to follow the model.

One conversation I had with an official was particularly instructive. Given that Britain would be invited to join occasional PSC meetings with non-EU NATO states like Norway and Canada, I asked whether there could be a special category for Britain. The official replied: "If Britain, why not Montenegro or Turkey?" This was not designed to humiliate, but merely to express the legal fact that Britain would be a third country on the same level. When I pointed out all of Britain's experience and assets that it had to bring to the foreign policy and security table, and suggested that the EU might be cutting off its nose to spite its face, the response was simple and devastating: "You cut off our nose, not us."

Another truth then about Brexit: the EU, like Britain, is prepared to suffer its consequences. Its pain will be significant, but not mortal. Britain, which inflicted that pain, will feel it worse.

The CFSP and CSDP were in large part British ideas. They depend on unanimity, and Britain has never been forced into adopting any initiative or contributing to any civilian or military mission. When it has – as with the Atalanta anti-piracy mission off the Horn of Africa, headquartered in London – the British government has celebrated the results. It was Britain's Cathy Ashton, the former EU high representative for foreign policy, who helped broker the Iran nuclear deal and an agreement normalising relations between Serbia and Kosovo. Britain may be able to continue participating in such initiatives after Brexit, but will not be able to meaningfully shape key decisions, still less take them.

Talk of a 'security surplus' that might assist us in negotiations is wildly overstated – matters of collective defence are addressed by Nato rather than the EU, and any British attempt to secure a good Brexit deal by, say, promising extra troops to the Baltics, would reveal Britain to be as transactional as Trump. In any case, European security is British security: Britain's investments are only a bargaining chip if they can afford to be withdrawn, and they can't.

The most damning effect of Brexit on foreign policy has been in the very fact it has occurred. In a moment of history where countries are pulling together to resolve problems multilaterally, and where regional blocs are becoming the norm, Britain opted to detach itself from common institutions and goals. The introspective myopia which has since gripped our body politic has confirmed to the world that we are too busy dealing with our own self-inflicted woes to worry much about the rest of the world's. The implications of that at global summits and conventions have been plain to see: Britain is either substantively absent or else sidelined by an international community bewildered by our enthusiastic self-harm.

Britain's foreign policy depends on multilateralism. That requires a strong reputation and a seat at the table, both of which we are losing. Like Othello, the jealous hero who had it all and threw it away, we have only ourselves to blame.