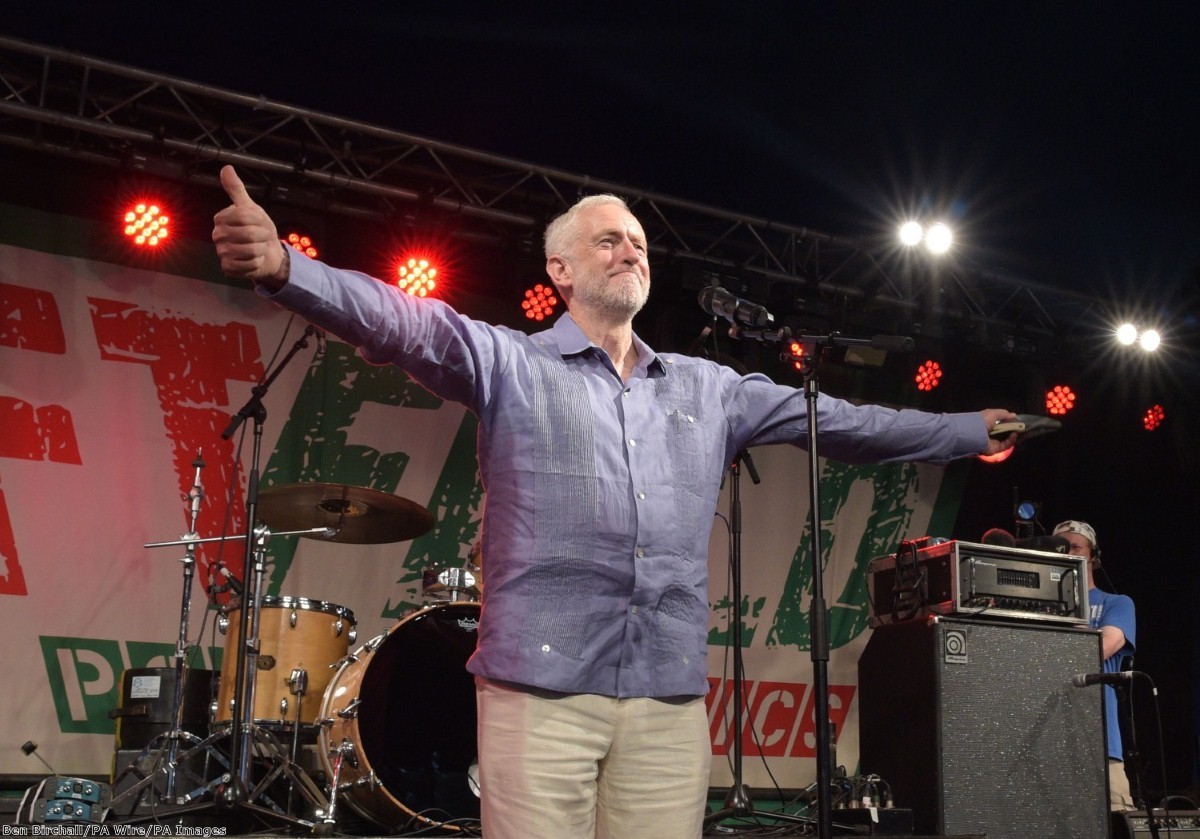 Jeremy Corbyn is a politician. Stop pretending he’s the messiah

I didn't want to understand the popularity of the Spice Girls, or why everyone supported Man United.  But I knew the former were a successful gimmick while the latter were bagging glory-hunters with every title. I knew – I just didn't want to.

Early 1997 was strange. Adulation of Blair seemed universal. It wasn't just a political but a cultural moment.  And it wasn't just about the shambolic Major government and its bigoted backbenchers. Blair was everything everyone wanted in a political leader at that point in time.

Except nobody is everything everyone wants. Not everyone wants motherhood and not everyone eats apple pie. What I saw was a man who would say literally anything to get elected. He'd face different ways on multiple issues and have no hesitation in politicising anything that would suit his needs. I never believed a word he said.

And the thing is, I think people sort of knew, deep down, that he was whispering whatever sweet nothings they wanted to hear, like an old-school courtship ritual. The public knew that he was surrounded by spin doctors. They knew they were being spun a yarn. It's just that the yarn sounded so good.

I've been reminded of that period in recent weeks. Jeremy Corbyn is not Tony Blair. Their politics are obviously very different. Their aims and worldview are diametrically opposed. And Corbyn does not have the same popularity as Blair at his peak – nor are the Tories yet as unpopular as they were two decades back.

But the fervent adulation of Corbyn by his ardent and growing mass of supporters at the very least matches, and if anything outstrips, what people felt towards Blair. For two years Corbyn was seen by supporters as a flawed but honest and decent leader who represented the one chance of taking Labour to the left. Even his most passionate fans were hoping, rather than believing, that the public would swing behind him.

It is hard to think of a British election that has more dramatically validated a political leader in the eyes of more people than 2017 and Corbyn. He lost, of course, but the political victory is his. And the transformation across different parts of Britain's body politic since then has been astonishing.

Labour MPs whose main concern about Corbyn was his electability are now sated. Others had ideological differences, preferring either reformist social democracy or outright Blairism. More were put off by his well documented links to various unsavouries.

But almost all have now publicly united behind Corbyn – some quietly, others with cringeworthy shows of public contrition in self-staged show trials in which they meekly volunteered for the dock. Perhaps the idea was to get senior centrists back into the shadow cabinet. If so, it worked as well as Mitt Romney's play to be Donald Trump's secretary of state – trading whatever credibility their old complaints had in return for the apparent prize of public humiliation. Corbyn simply stuck with those who'd stuck with him. He had every right to.

But Labour is a party. Uniting is what parties often do. Far worse have been the journalists. The real lesson of the election for journalists is 'don't make predictions' – at least, not predictions about voter behaviour. It's not the job of journalists to predict how tens of millions of people will vote.

Instead, journalists have debased themselves since the election with a wave of supine mea culpas and grovelling apologies for failing to predict that Corbyn would prosper. Whilst the right wing press returns to the day job of Tory leadership speculation, left of centre journalists have prostrated themselves before their new master – columnists and reporters, bending the knee.

None of the real weaknesses in British political coverage – the obsession with Westminster shenanigans, the ignorance of unfashionable issues and causes (such as social housing until two weeks ago), the homogenous demographics, the echo chambers and social clubbishness, the treatment of the whole thing as a bit of a game – none of these are addressed or solved by apologising for calling the election wrong. None of them are solved by retracting words written when Corbyn's public approval ratings and election results were among the worst on record.

Beyond a desperation not to be seen as 'the bad guys', there's another factor driving the collective grovel – fear of missing out. Many centre-left types had long nurtured a utopian dream of a socialist Britain, but no longer dared believe it possible – and now, suddenly, everything seems possible. The polls show Jeremy Corbyn – Jeremy Corbyn – on course to be the next prime minister! Nationalisation! Taxing the rich! Redistribution! Socialism! And all delivered by the voters of Canterbury and Kensington!

For embittered, world-weary dreamers, it's as if the train they've waited their whole lives for has turned up out of nowhere and is about to leave the station. Everyone is scrambling to get on board. This is a ride no-one wants to miss out on.

And nobody wants to be left behind. The validation of being on 'the right side of history' is a crack pipe for the left. Those who criticised Corbyn are suddenly on the wrong side of history – on the team that's losing to the one that's winning wearing socialism shirts.

You, in your 40s, writing articles for Comment is Free on how Corbyn cannot win. Them, in their 20s, making 'Jez We Can' twitter memes that you dismissively laugh at – until suddenly they win. How old do you feel? Very bloody old. Jumping on the Corbyn bandwagon is now the ticket to eternal youth.

It all makes for mass psychodrama. What it doesn't amount to is journalism.

A politician by any other name

Having treated Corbyn as the devil incarnate for two years, the left-leaning media suddenly see him as the messiah, falling in line behind the activists with whom they overlap.  Having previously picked at every single nit – were there really no seats on that train? – many are letting their hair down and joining in the fun. Corbyn is the real prime minister! The Tories have no mandate! The country wants an election! The DUP deal is a bung!

We have gone from over-scrutiny to under-scrutiny. Who checks and balances a messiah? But Jeremy Corbyn is neither devil nor messiah. He is what he has been for more than four decades – a politician.

His growing support bears more hallmarks of fandom than judgement. At first it's interest, then hope, then admiration, and then adulation – and then, finally, outright denial of reality. White is black and black is white. Like Blair before him, Corbyn comes across as honest, decent and sincere. And sometimes he is. But sometimes he's not.

All of the following statements are demonstrably true:

• he can give compelling answers to challenging questions – when asked about the role of foreign policy in Islamic terrorism, he raised the issue of Western-induced instability and terror funding rather than slipping into old 'blowback' arguments
• he can also be evasive – his answers to Andrew Neil on his views on Nato during the election campaign are a case in point
• he can be principled – he broke with the Labour whip to vote against lowering the benefit cap in 2015
• he can be unprincipled – he then made no mention of the benefit cap in his 2017 manifesto
• he can be honest – even when forced by his party to accept Trident renewal, he has maintained his personal opposition to it
• he can be dishonest – he told Jeremy Paxman during the election campaign that he'd get rid of the welfare freeze, which was simply not the case
• sometimes he prioritises those in most need – his manifesto took the bold but necessary step of pledging to abolish jobcentre sanctions
• and sometimes he doesn't – his manifesto committed huge amounts to abolishing university tuition fees, which would mostly benefit high earning graduates, while leaving billions of welfare cuts untouched
• he can happily face both ways on an issue – his election campaign was an exercise in being all things to all people on Brexit, smiling and nodding to Remainers while promising ardent Brexiters most of what they want

It should be obvious by now that Corbyn is a politician – a politician with left wing views that he does not always live up to, a man who sometimes practises what he preaches but at times clearly does not.

Politics is a messy business, not a place for the naive. And voting is a balanced judgement – most voters are not wholly supportive of whichever party or politician they vote for.

But his growing ranks of cheerleaders wish to simply see what they want to see, project what they want onto him, and contort all fact and reason to pretend that there are no questions, no downsides – and that anyone who raises those questions, or points out those downsides, is part of the cabal of dark forces out to bring down the messiah, destroy social justice, and keep the super rich in their luxury yachts.

If the Tory campaign demonstrated one thing – and it demonstrated many things – it's that hubris is a dangerous thing in politics.

The Corbynites have now caught the bug, acting as if election victory is all but inevitable, that history is on their side, and that government and socialism await. Maybe they are, maybe they do. Nothing can be predicted anymore.

But Labour assembled a coalition of voters – pro and anti Brexit, pro and anti Corbyn, tactically voting Lib Dems and outright anarchists, and many millions of voters turned off by Tory cuts and attracted by the Labour manifesto.

If Labour councils cut services, they do so in his name. If they kick housing campaigners around, it's his name on the business card. If Labour backs leaving the single market, he's signed off on it. If Labour doesn't find the money to reverse welfare cuts, that's his choice.

And if the Tories start spending in key areas such as schools, and Labour spends the summer protesting on the streets against a democratic election result, if Corbynites trigger a party civil war by trying to drive through rule changes at conference, if the leadership decides to go beyond the manifesto and embrace 'new left' pledges such as land value taxes and universal basic income, that may go down perfectly well with the electorate.

Or it may not.

But the next election will be an election to decide who governs Britain – and voters will treat Corbyn as a politician, even if his new disciples do not.