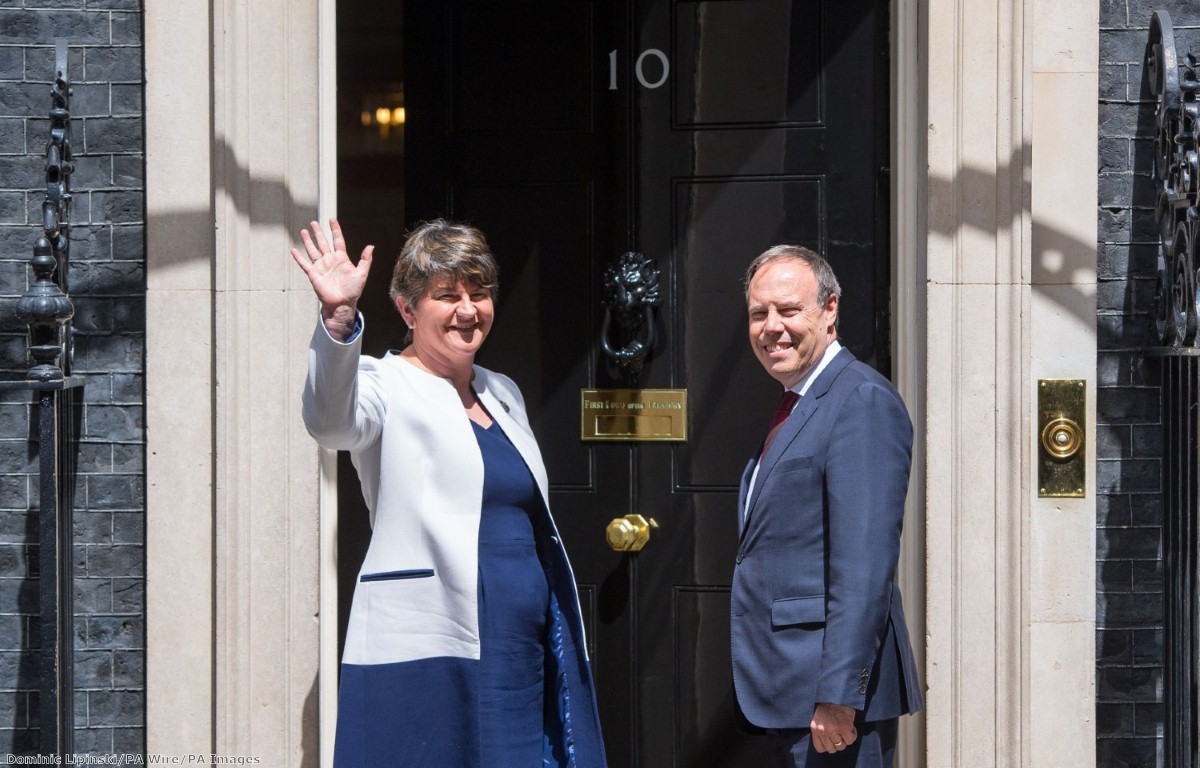 The government needs to get its business through parliament – that's what governments do. So it's no surprise that the prime minister is looking to bolster her reduced number of MPs with the support of others, specifically the Democratic Unionist Party (DUP). But at what cost to the government's reputation for fighting corruption?

Northern Ireland doesn't currently have an elected government. Four months ago the devolved administration collapsed in acrimony following controversy about the 'Cash for Ash' scandal over the Renewable Heat Incentive (RHI) scheme. The assembly election which followed didn't change the fact that politicians from both nationalist and unionist traditions needed to agree to work together to restore devolved government. This hinged on demands for the DUP's leader Arlene Foster to stand aside for the duration of the independent public inquiry into RHI scheme, which she has refused to do.

To re-cap: the UK's prime minister is seeking support for her government in negotiations with a party leader who lost her hold on government over serious questions about the use of public funds.

There have been several recent corruption concerns in Northern Ireland. The National Crime Agency has opened an investigation, at the request of the local police, into the sale of Northern Ireland assets owned by the Republic of Ireland's National Assets Management Agency (NAMA). Other issues relate to the management of public contracts for housing maintenance. Meanwhile, the funding of most of Northern Ireland's political parties remains unusually opaque. All of this is hard to assess, but we have a responsibility not to just shrug and accept such things as a normal part of modern politics.

A possible deal to support the new UK government in parliament is not the only reason why transparency over who funds Northern Ireland's political parties now matters to British politics. The DUP was used as a channel for hundreds of thousands of pounds to support the Leave campaign during last year's EU referendum.

In the past five years, the UK has established itself with a reputation for global leadership in the fields of tackling corruption and its counterpart, promoting open government. The UK has risen to be in the top ten of Transparency International's annual Corruption Perceptions Index, the Serious Fraud Office has acquired one of the better anti-bribery enforcement records around the world, and this country has been a leader in the Open Government Partnership.

As the curtain fell of the last parliament, the previous government passed the Criminal Finances Act, with its ground-breaking provision for Unexplained Wealth Orders to freeze the assets of kleptocrats using the UK as a safe haven. Much remains to be done but worryingly, some of the gains of recent years could now be at risk. The long road to the arrival of the Bribery Act reminds us that there are those who will seize any opportunity to lobby to weaken it, and others who in difficult times for the economy will argue we should seek to attract foreign cash irrespective of its origin.

In seeking to preserve a reputation for fighting corruption, whilst courting such controversial political support, Theresa May's government needs to show that any common interests it assumes with the prospects of the DUP will not prevent it from governing in the national interest. Here's three early indications of this she could give:

1. Follow-through on James Brokenshire's consultation by introducing full transparency around who is funding Northern Ireland's political parties, to help reinject confidence into the political system

2. Guarantee that the RHI Inquiry will proceed openly, with full access to files, and all the resources it requires to give people in Northern Ireland confidence that it can get to the bottom of where that money went and why

3. Ensure delivery of Northern Ireland's commitments in the Open Government National Action Plan, even in the absence of its politicians returning to government in Stormont, and bring greater fiscal transparency to the Executive.

In the context of the concerns surrounding the DUP, backsliding on these commitments will not play well on the global stage. It would provide an easy target for those who wish to see the UK's anti-corruption efforts fail. It might help construct a majority in the House of Commons but the consequences would be most destructive for the UK's reputation on fighting corruption.

Duncan Hames is the director of Transparency International UK