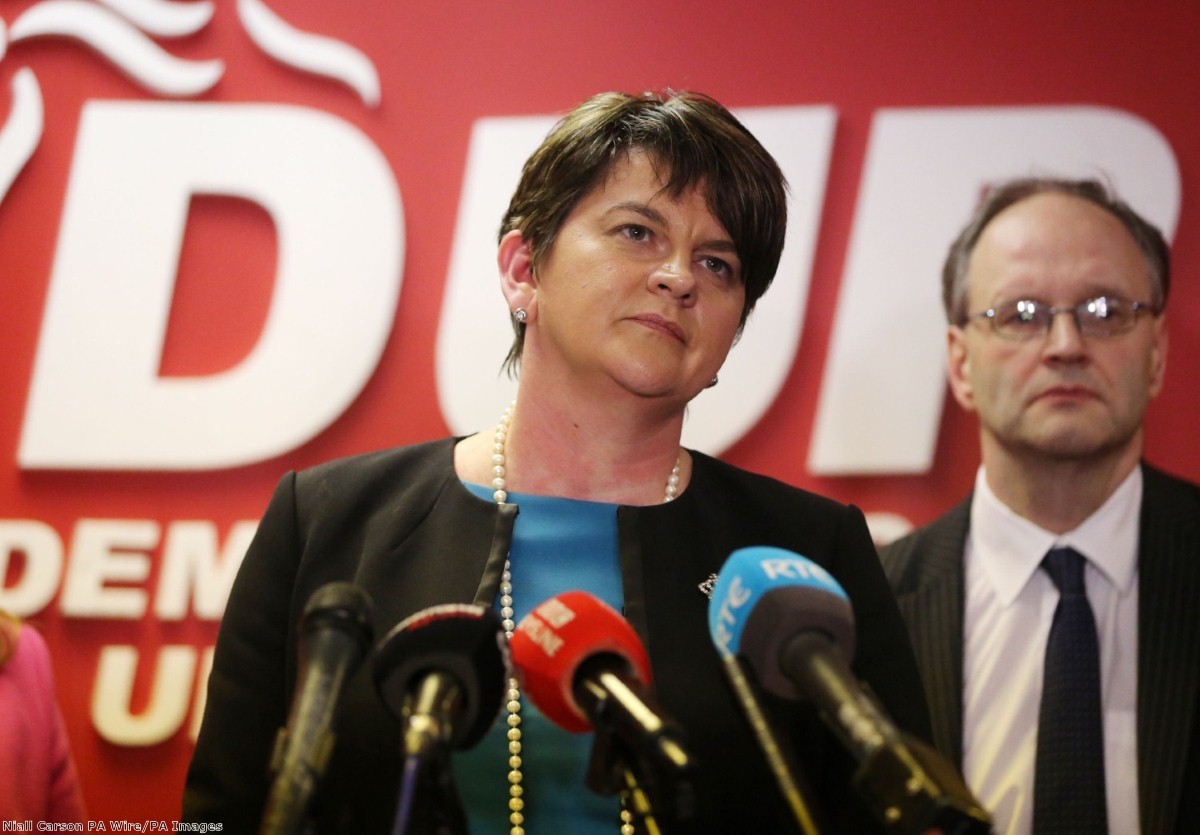 ‘Burning but flourishing’: The frenzied religious politics of the DUP

'Ye shall know them by their fruits,' says the King James Bible. It's more usually written as 'By your friends shall you be known.' It will be a familiar verse to members of the Democratic Unionist Party, but it may just be a phrase, too, that's running through the minds of Conservative MPs as they contemplate who they are now reliant on for their political survival.

To really understand the Democratic Unionist Party, you need to appreciate its fundamentalist Christian roots. Like Labour and the trade unions, the two are indivisible. Ian Paisley established the Free Presbyterian Church in 1951 and the DUP twenty years later. This is where the moral absolutism – and at times raving bigotry – comes from, as its adherents pray for the "power to stem the onslaughts and hell-inspired assaults of modernism". This is not a line from some dusty pamphlet from the 1950s, taken out of context; it’s a segment from the 'What we Believe' section of the church's own website today.

In his heyday, Paisley was more akin to a 17th Century religious fanatic than a political leader, denouncing Pope John Paul II during an address to the European parliament in 1988 as the "anti-Christ". He got off lightly. Following the death of the reforming 'Good' Pope John XXIII, Paisley remarked that "this Romish man of sin is now in Hell".

Paisley wasn't particularly bothered about holding office, just in making it as difficult as possible for those who did. For most of its existence, the DUP has done everything possible to destroy moderate unionist leaders and derail attempts at power-sharing with Catholic-Nationalists. As WB Yeats put it, "the best lack all conviction while the worst are full of passionate intensity". The pin-striped ex-officer types of traditional unionism were simply no match for Paisley and his superlative rabble-rousing and splenetic Old Testament rhetoric.

As such, Paisley and the DUP (the two were indistinguishable for years) helped scupper the Sunningdale Agreement on cross-community power-sharing in 1974. A decade later, he led the charge against Margaret Thatcher over the signing of the Anglo-Irish Agreement, which gave the Irish government a consultative role in Northern Ireland's affairs. Even as late as 1998, Paisley was stood outside the talks that led to the Good Friday Agreement, denouncing those inside for selling-out. Not for nothing was he referred to as 'Dr. No'. Even that doctorate is controversial. It was only ever an honorary title, bestowed by the Bob Jones University of South Carolina. Once infamous for refusing to admit black students, the university's ban on inter-racial dating was only scrapped in 2000.

Still, everyone mellows and Paisley, to his enduring credit, eventually managed to break bread with Sinn Fein and enter power-sharing with Martin McGuinness in 2007 (the subject of recent film). Paisley handed the reins to his long-time deputy, Peter Robinson, a year later and this odd-couple arrangement between Unionism and Irish Republicanism lasted until the start of this year. Robinson's successor, Arlene Foster, mishandled the fallout from a renewable heating subsidy she introduced that lacked any cost controls, piling up a liability for the Northern Ireland Executive of around £500 million. Her refusal to accept responsibility triggered McGuinness's departure as deputy first minister. His resignation statement also upbraided DUP politicians for their "shameful disrespect" for minorities. "Women, the LGBT community and ethnic minorities have all felt this prejudice," he scolded.

In recent days, much of the British media has alighted on the DUP's less than progressive views but while the social mores of a DUP supporter seem archaic to most British tastes, opposition to abortion, for instance, is shared widely across the political and religious divide in Northern Ireland. It's the DUP's demagoguery and their casually insulting manner that sets them apart.

Party representatives seem to exhibit an almost involuntary rudeness and genuinely don't seem to care how others perceive them, priding themselves on losing no opportunity to wage a never-ending culture war against Sinn Fein. Although hard to like, DUP politicians are often capable of very dry humour and behind their bellicosity are capable of genuine pragmatism. This explains the party's remarkable rise from rank outsiders to main players, eclipsing the Ulster Unionists – who ran Northern Ireland for fifty years – in the process. Last Thursday they maintained their vice-like grip on the unionist vote, gaining an extra two parliamentary seats and providing Theresa May with a bloc of ten MPs to call upon.

Although always very prim about denouncing the IRA's "men of violence" throughout the troubles, the DUP itself walked a tightrope between constitutional politics and openly flirting with paramilitarism. During the 1980s, leading lights in the party were involved in Ulster Resistance, an attempt at creating a private loyalist militia, only pulling out when the organisation started importing guns. Around this time Peter Robinson led an 'invasion' of loyalists across the border, trashing the Irish village of Clontibret. He was later charged with unlawful assembly and given a hefty fine in lieu of a jail sentence. Just last week, the party was endorsed by the Loyalist Communities Council, a body that speaks for the Ulster Defence Association, Ulster Freedom Fighters and Red Hand Commando.

To mainstream British tastes, the DUP is deeply idiosyncratic or even a distasteful remnant in our public life. Ironic, perhaps, for a party that professes to be more British than the British. On their best day a pork-barrelling and pro-public spending party, the DUP is committed to maintaining the pension triple-lock and winter fuel allowance.

They will use the arrangement with Theresa May to lobby to address Northern Ireland's post-Brexit shortfall in EU funding – some £600 million a year – and secure guarantees around continued farm support payments. As the old saying goes, unionists are loyal to the half-Crown. They will probably want the English tax payer to pick up the tab for lost receipts when Northern Ireland reduces Corporation Tax to 12.5% next year. This is to match the rate in the Irish Republic in a bid to make Northern Ireland more economically competitive and was very much Peter Robinson's hobby horse.

Hyper-tribal and self-pitying, the DUP will not welcome the heightened media attention it is currently receiving, not least because the whiff of corruption seems to follow it everywhere. An inquiry into the Renewable Heating Incentive scandal, headed by retired judge Sir Patrick Coghlin is still proceeding, with a report due next month. There is also the matter of 'dark money' donations for last year's Leave campaign which were funnelled through the DUP. The cost of a £300,000 wraparound advertisement in the Metro newspaper (which isn't even distributed in Northern Ireland) was paid for by the DUP, utilising the laxer rules on the origins of donations that apply in Northern Ireland.

If it's smart, the DUP will be keep its influence over Theresa May as low key as possible. The sense that they are the tail wagging the dog is damaging for both parties. For now, they will soak up the criticism. Millwall Football Club's motto: 'Everybody hates us we don't care' is often applied to the DUP. Another way of relaying that sentiment comes from the motto of the Free Presbyterian Church: 'Ardens sed Virens' – 'Burning but flourishing,' alongside the motif of the burning bush through which God spoke to Moses.

Criticism with influence, then? Rather appropriate for where the DUP finds itself.

Kevin Meagher was special adviser to former Labour Northern Ireland secretary, Shaun Woodward. He is author of A United Ireland: Why unification is inevitable and how it will come about published by Biteback