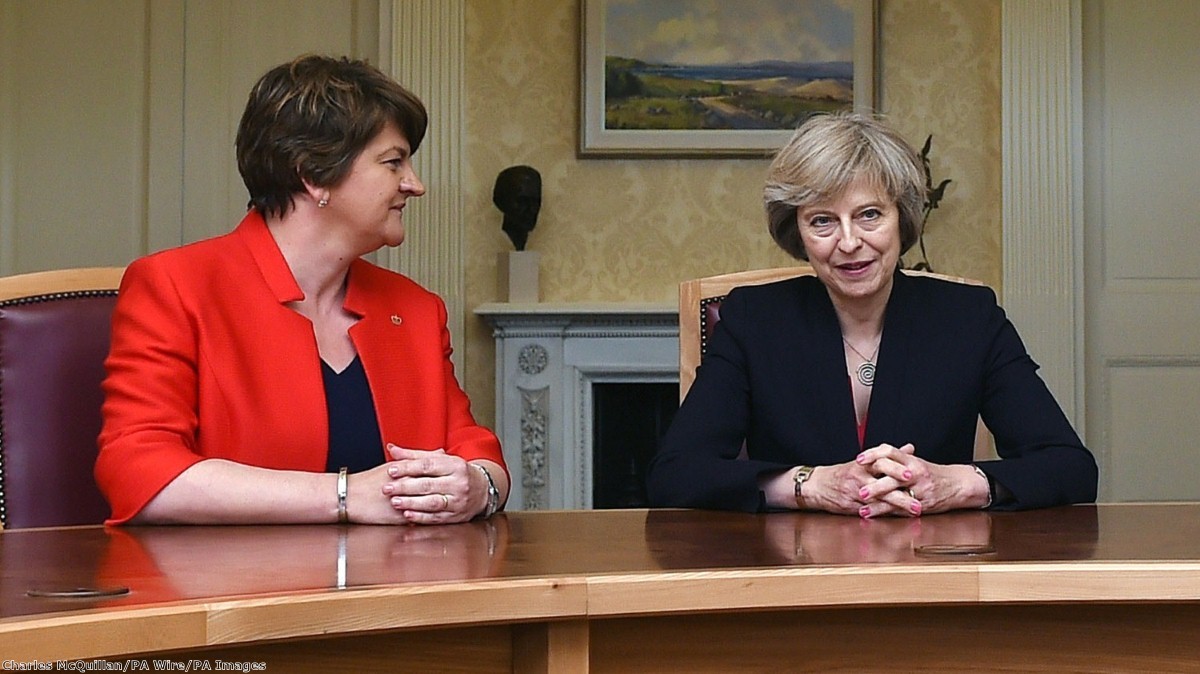 Last Thursday, as British voters went to the ballot box, former FBI Director James Comey sat before a United States senate intelligence committee hearing to provide testimony on the events leading up to his firing by President Trump. Mr Comey's testimony was devastating. Caricaturing Trump as a serial liar who attempted to influence an FBI investigation into potential Russian collusion with his presidential campaign, Comey's appearance at the committee hearing may in time come to be seen as the moment when the president's impeachment assumed an air of inevitability.

Later that evening, the general election exit polls were released, causing shockwaves across the British political establishment and raising the prospect of not only a change of government, but a change of direction. On austerity, on public services funding and, perhaps most consequentially of all, on Brexit, a damaged and diminished prime minister would now surely be forced into a change of course.

Yet, progressives should be careful what they wish for. The alternative is often worse. In the United States, the impeachment and removal from office of a buffoonish and ineffective president would likely result in the inauguration of President Pence. Pence, a much more effective political operator, would probably have much more success in implementing his far-right, socially conservative agenda. Pence would no doubt find a comfortable political home with the Conservative party's prospective new partners in government: Northern Ireland's Democratic Unionist Party (DUP). Aside from their mutual support of orange men, on issues such as abortion and marriage equality both Pence and the DUP's respective views are deeply rooted in a fundamentalist interpretation of Christian scripture.

A government led by Theresa May and propped up by the DUP would appear at first glance to be a progressive's worst nightmare. A modern day coalition of chaos to match anything that a DUP parliamentarian might recite from the Book of Revelation to terrify their children into saying their prayers, going to church on Sunday and not watching Hollyoaks.

Suggestions over the weekend that a vote could be offered on potentially limiting access to abortion throughout the UK tend to suggest that such concerns are merited.

The reality is likely to prove quite different.

For all the hysterical reporting since last Friday of the weird, antiquated and downright despicable positions that the DUP have taken across a range of social and political issues, they are nothing if not pragmatic. With almost two, seemingly interminable decades of negotiating with Westminster and other local political parties under their belts, experience directs us to conclude that the DUP's real demand in discussions with the prime minister will be much more prosaic: more money.

On this, the DUP's manifesto is instructive. It calls for a reversal of planned cuts to welfare, support for equalising corporation tax with the lower prevailing rate across the border, and the best possible Brexit deal for Northern Ireland. Put simply, it all amounts to a demand for more money from central government.

Of course, the DUP will insist that the UK "respects" what they would argue are differing attitudes to social issues in Ulster. Yet this will likely mean Westminster continuing to tolerate the disparities in Northern Ireland rather than walk back the progress achieved in England, Scotland and Wales over the course of the past decade.

On Brexit, despite the simplistic observation from many in the British media that the apparent opposition of all parties in Northern Ireland to the reimposition of a hard border will inevitably mean that the DUP would mount strong resistance to a Hard Brexit, the reality is rather more nuanced. While it's true that the DUP are, at least superficially, opposed to a hard border, they have also called for the UK to swiftly commence the negotiation of free trade agreements with other countries. It is not possible to reconcile these two contrasting objectives. Membership of the customs union is widely considered a prerequisite to a soft border yet precludes the negotiation of separate trade arrangements outside the institutional framework of the European Union. So, neither hard Brexit nor soft Brexit, the DUP are firm proponents of the "have our cake and eat it" approach to Brexit – provided, of course, that the cake in question does not contain any messages or iconography promoting gay marriage.

From a financial perspective therefore, it would appear that the North is in for quite a considerable windfall. Across the Common Agricultural Policy, EU regional development and Peace Programmes, Northern Ireland is presently in receipt of several hundred million pounds of EU funds per year. The DUP will surely insist that the government guarantees the majority of this. If Arlene Foster is feeling especially bold, she may also demand that the government underwrites the some £500m cost of the botched Renewable Heating Incentive scheme that led to the collapse of the Assembly earlier this year.

The non-financial consequences of this deal however will inevitably manifest within Northern Ireland itself.

One of the more striking outcomes of the general election was the extent to which Northern Ireland has been geopolitically repartitioned, with every border-facing constituency in Northern Ireland electing a Sinn Féin candidate with the rest of the country (one independent excepted) favouring the DUP. The election of abstentionist MPs in the border areas represents a quite staggering withdrawal from the national political discourse by those most desperately in need of political representation in the coming months, a situation further exacerbated by the ongoing suspension of the Northern Ireland Assembly.

Indeed, in the present environment, it is difficult to see a new Assembly being formed any time soon. A newly emboldened and hubristic DUP have little, if any, incentive now to compromise with Sinn Féin on any of the issues currently preventing a deal being done. The whittling away of a Unionist majority at Stormont following March's Assembly elections arguably acts as a profound disincentive to do so.

Without a voice, who will stand up for the interests of the nationalist community in Northern Ireland? What are the longer term implications of this degree of, admittedly voluntary, disenfranchisement?

Given the Conservatives distasteful campaign, the unrelenting politicisation of Corbyn's relationship with the IRA, their call for an end to the "unfair" prosecution of British soldiers for crimes committed during the Troubles and their present desire for a deal with the DUP, one might be forgiven for wondering how a Conservative government might ever expect to be perceived by nationalists as independent guarantors of the Nothern Irish peace process. Some have even suggested that this arrangement might render the UK in breach of its obligation under the Good Friday Agreement to act in an impartial, conscientious and respectful manner in all dealings with both communities. The Taoiseach has already expressed his concerns to the prime minister in this regard, further heightening tensions between the two nations prior to the commencement of Brexit negotiations.

The most pressing and high profile concern is obviously with respect to the future of the border once the UK exits the EU. I wrote in the Belfast Telegraph last month that there doesn't seem to be a clear or obvious political solution to the Northern Irish border issue.

Recent developments do not convince me that one might now be easily discovered.

I often encourage outside observers of the Northern Irish political scene to look beyond the rhetoric of both major parties and instead attempt to view events in the context of their respective existential objectives.

The DUP instinctively perceive the "special status" demanded by Sinn Féin as a backdoor to remaining in the EU and, ultimately, Irish reunification. With the influence now wielded by the DUP at Westminster, it would seem that any kind of special or preferential deal that might tend to weaken the Union is off the table.

From Sinn Féin's perspective, this is not the unmitigated disaster that it might appear at first glance. Indeed, from a republican perspective it is difficult to imagine a more caustic bête noire against which to rally nationalist sentiment against the British government and behind Irish reunification.

In many ways, this arrangement suits both. Ironically, this is perhaps the most compelling argument against it.

Ciarán McGonagle is a London-based lawyer. Originally from Derry, Northern Ireland he writes on legal and political topics at www.ciaranmcgonagle.com