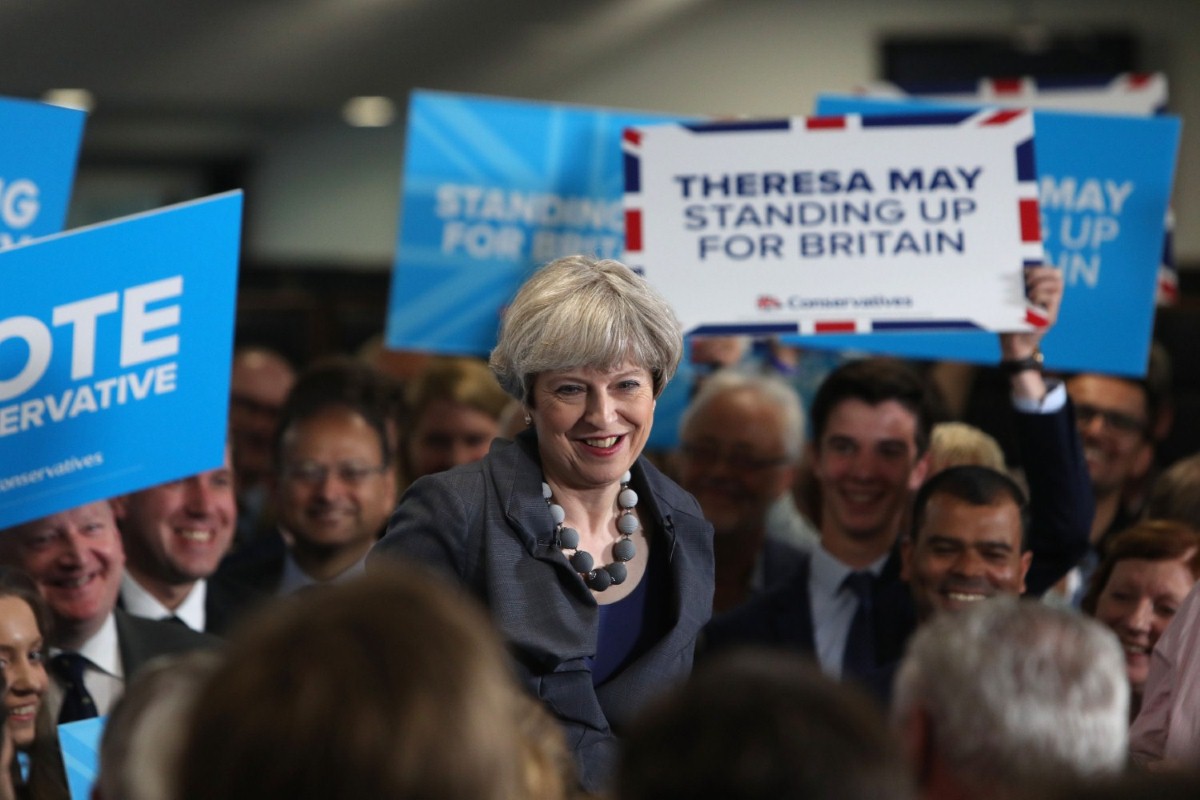 Week in Review: Running to catch the purple train

Back in the last century when this election campaign was in its youth and Theresa May was strong and stable, it became an hourly occurrence to say the Tories were driving their tanks all over Labour's lawn.

Heavy coverage of rather empty rhetoric to promote workers' rights and clamp down on corporate greed helped portray Theresa May as the prime minister who'd steal Labour's historic position as the party of working class voters. She was going to take Labour heartland seats everywhere outside the metropolitan cities.

Then came the manifestos.

While the Tories' Blue Labour posturing is now in tatters, geographically the tank manoeuvres continue – on both sides. Yesterday saw Theresa May campaigning in the old Yorkshire mining seat of Hemsworth, held by Labour since its creation in 1918. Current Labour majority? 12,000 – that's nearly 30%.

Meanwhile Jeremy Corbyn gave a keynote speech on Brexit at an event in the Essex seat of South Basildon and East Thurrock. The successor to the iconic seat of Basildon, this is the sort of Middle England turf that Corbyn was thought to alienate. Current Tory majority? 7,700, or 17% – with Labour in third.

All of a sudden, everyone's tanks are all over the place. What's going on?

The end of Ukip is what. For all the focus of young voter turnout, the behaviour of 2015 Ukip voters is absolutely crucial in numerous target seats.

Early on in the campaign polling showed around half planning to vote Tory – which, on top of Labour Brexiters 'lending their vote' to May, would have delivered the Conservatives a flood of seats.

More recent polls show around 40% of 2015 Ukip voters still switching to the Tories, but around 15% now planning to vote Labour.

Apply this evenly across the country, and the Tories still win a large majority.

However, much of Ukip's 2015 vote came in Tory fortresses in the South East and East Anglia. If their vote in those seats now collapses, it's likely they'll go overwhelmingly Tory. These are not seats where Labour has had a look-in since Blair's landslide era.

And if Ukip's vote goes heavily Tory there, that would suggest there must be other seats in other regions where it is splitting more evenly between reds and blues.

YouGov's new seat analysis model caused a huge stir when it launched this week with a forecast of a hung parliament. It assumes that people with similar demographics and political backgrounds, in similar seats, will behave similarly. It's not a bad assumption. It means that London seats with lots of young voters will behave similarly. And northern seats with lots of ex-Labour Ukip voters will do likewise.

And YouGov's model seems to have two specific trends that stand out. First, Labour is doing very well in London, holding onto their own marginals, taking stretch targets such as Enfield Southgate.

Backed up by polling showing Labour streaking ahead in London, it's easy to see the basis of this trend, even if certain seat-specific results look odd – lots of ethnic minority voters, lots of young voters and students, lots of young professionals, and lots of angry Remainers make for lots of Labour votes.

But the other trend is more surprising. In numerous key seats in Northern England and the Midlands, the model has the Tories underperforming.

So, in the North East, the Tories' 10% majority in Stockton South falls to three per cent. The party gets nowhere in trying to take Hartlepool and Darlington, and is five points down in Bishop Auckland.

In the North West, three key seats in Cumbria, where Labour got a pasting in last month's local elections, are all marked as tossups. Labour open up a 14 point lead in marginal Lancaster and Fleetwood that can't just be explained by the local student vote. Tory majorities in Warrington South and Crewe and Nantwich are slashed.

Keighley and Pudsey in Yorkshire – Tory majorities of six and nine per cent respectively – are both marked as tossups. Meanwhile solid Conservative majorities in Sherwood and Broxtowe in the East Midlands are cut heavily. Lincoln turns red.

Partly this is down to YouGov's polling giving the Tories leads of three or four percent – smaller than their 2015 lead, indicating a swing from them to Labour. But this doesn't explain how their majority in Stockton South, for example, falls so far.

Received wisdom – also left in tatters by this election – holds that Labour's vote is piled up in its safe seats. But that would mean the Tories do proportionally better in the marginals. YouGov has them doing proportionally worse. It's the Tories who seem to be piling up votes in the wrong places.

Young voters matter, tactical voting by Greens and Lib Dems matter, but if YouGov are right, the Tories simply aren't winning enough ex-Ukip votes outside the South East.
Now, maybe Ukip are weighting Ukip voters by their previous voting behaviour – many Ukip supporters in these old Labour heartlands used to vote, inevitably, for Labour. If they ditch Ukip now, they might be thought likeliest to return to the fold – especially with Labour unabashedly backing Brexit.

Alternatively, it could be that the huge sample YouGov uses is showing that Ukip voters in these areas are saying they'll vote Labour – including in Tory-held marginals. This would have the propensity to turn the election on its head.

But if that's the case, why would May be campaigning in unwinnable Hemsworth?

Maybe this is her version of Hillary Clinton trying to win Arizona while the Rust Belt quietly got away. Maybe it's hubristic. Maybe it's just for show – the battleground Potemkin.
But this could equally be because both Labour and the Tories' canvas returns are showing huge volatility and churn among ex Ukip voters – making all kinds of seats theoretically winnable. The Ukip vote is definitely soft. Labour for their part may feel that if Basildon is out of reach, neighbouring ultra-marginal Thurrock, with its huge Ukip vote, most certainly is not.

And so the Tories will spend the final week of their election campaign on Brexit – trying to talk it up, making it out to be the great national project of the next five years rather than the enormous looming omnishambles it actually is.

Always remember that millions of people in this country think of Brexit as the greatest political hope they've had in years. Many are looking for a new political home. After running the most shambolic election campaign anyone can remember, Theresa May hopes to stay in her home by offering her party as theirs.