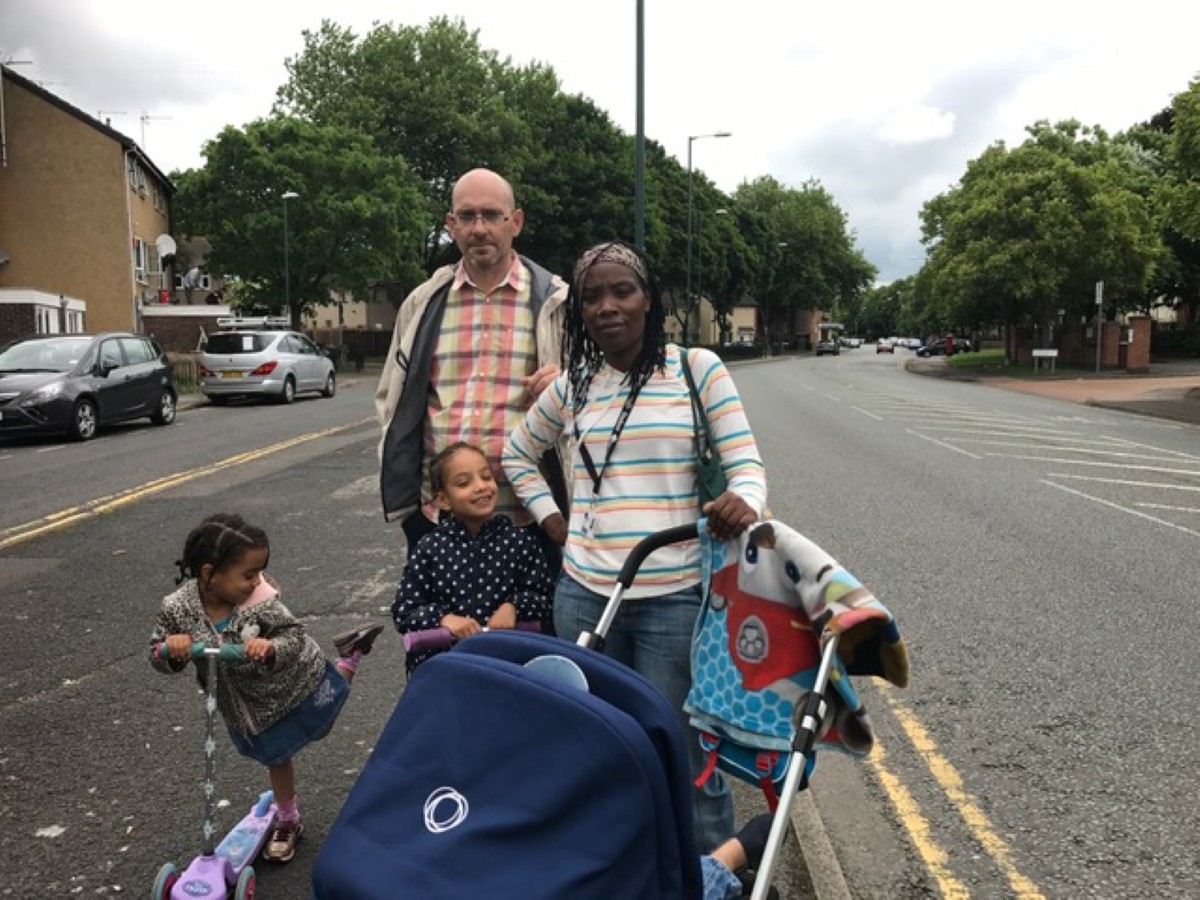 ‘They all just screw you over’: Views on the election from a Nottingham council estate

On the St Ann's estate in Nottingham it's pretty difficult to find anybody who is planning to vote. But that doesn't mean that people here don't have much to say about politics. They've got bucket loads.

Paul and Anne-Marie Avison are on their way to catch a bus into the city centre with their three young children. "I've been a carer for 15 years," Anne-Marie says. "The wages are low and I'm on a zero hours contract. I'm not happy. I have to accept shifts that are difficult for me to do just so I can make up my hours. It's hard"

I ask the couple if they are impressed by Jeremy Corbyn's promise to scrap zero hours contracts and increase the minimum wage. "Who's that then, the local guy?" Anne-Marie asks. When I explain that he's the Labour leader she looks embarrassed. "See, I told you I don't know anything about politics," she says.

But she does. She knows plenty. We chat about workers' rights, the cost of living and local issues. I list some of the key policies from each party, she says she likes the sound of some of Labour's. But both her and her husband say they don't trust any party to make a real difference.

St Ann's is one of the most disadvantaged areas of Nottingham. It's just a few minutes from the city centre but as I walk along the main thoroughfare, it feels a long way from the fountains and coffee shops just a mile or so down the road. Lots of the people here talk about everything closing down. "There's nothing near my house, not even a cash machine," one person says.

I pass an old pub that's been turned into a convenience store – locals say most of the pubs have gone now. A man stops to talk to me as he leaves the shop. He's in his 40s and tells me that he never hears from local politicians. "I haven't had a single leaflet through my door, let alone anyone knock on it," he says. "They're all the same, so what's the point?"

The estate sits in the Labour constituency of Nottingham East. Chris Leslie has been the MP since 2010 and has a majority of just under 12,000. He was selected by the party as the candidate here after losing his seat in Shipley in 2005. He seems popular around the city but most of the people I speak to in St Ann's have never heard of him.

"He's very personable," says Lisa McKenzie, an academic and activist who used to live on the estate. "There's nothing wrong with him or anything, but people round here won't know who he is."

"There's a loyal Labour vote here, especially among the elderly, but it's dwindling," McKenzie adds. "It won't swing to the Tories or Ukip though, people just won't bother voting."

At the local food bank, staff are a bit more optimistic. "Chris Leslie has been very supportive of the work we do," the manager Debbie Webster says. "He refers people to us when they are in need and the local Labour councillor John Collins also runs a regular surgery here.

"I think people used to think there was no difference between each party so they would choose not to vote," she says. "But under Corbyn there is a difference, people have got a real choice now."

Webster, who also runs an advice centre, says that the food bank was set up in 2012 in response to the government's welfare reforms. She says that the need has increased each year since then and that between 30 and 40 people per week currently rely on the service for food. "Lots of people we help are those who have a disability or illness but have been found 'fit for work'," she says.

As I walk around the estate I meet an ex-soldier. He's served in Iraq, Afghanistan and the Balkans but left the army in 2012 after 22 years of service.

"Some of the guys I served with have had real trouble getting work," he says. "I'm in security now but I refuse to work on a zero hours contract, I won't even consider it.

"I'm lucky to have a decent permanent contract, loads of the other guys are paid peanuts."

Is he planning to vote? "No, it's just the same old rubbish. Nothing changes. I'm no revolutionary but we need something radical."

The next person I meet is an older man who says he hasn't voted for years. "I used to really study the manifestos," he says. "But I realised it's just a marketing document, they all just forget them once they have power."

He's on his way to visit his disabled partner. He says things have got a lot harder for her in recent years. "It's hand to mouth, most months"

I only speak to one person who is voting. She's elderly and has already sent in her postal vote but doesn't want to say who she's backing. "I never tell anybody," she says. "There are some things you shouldn't talk about."

The reasons why people are not voting are all alike: "I've no faith in any of them whatsoever." "They all just screw you over" "I'm not interested anymore."

Labour's big success of this election has been to connect with non-voters. But on this estate and many others like it, it's clear there's much further to go.