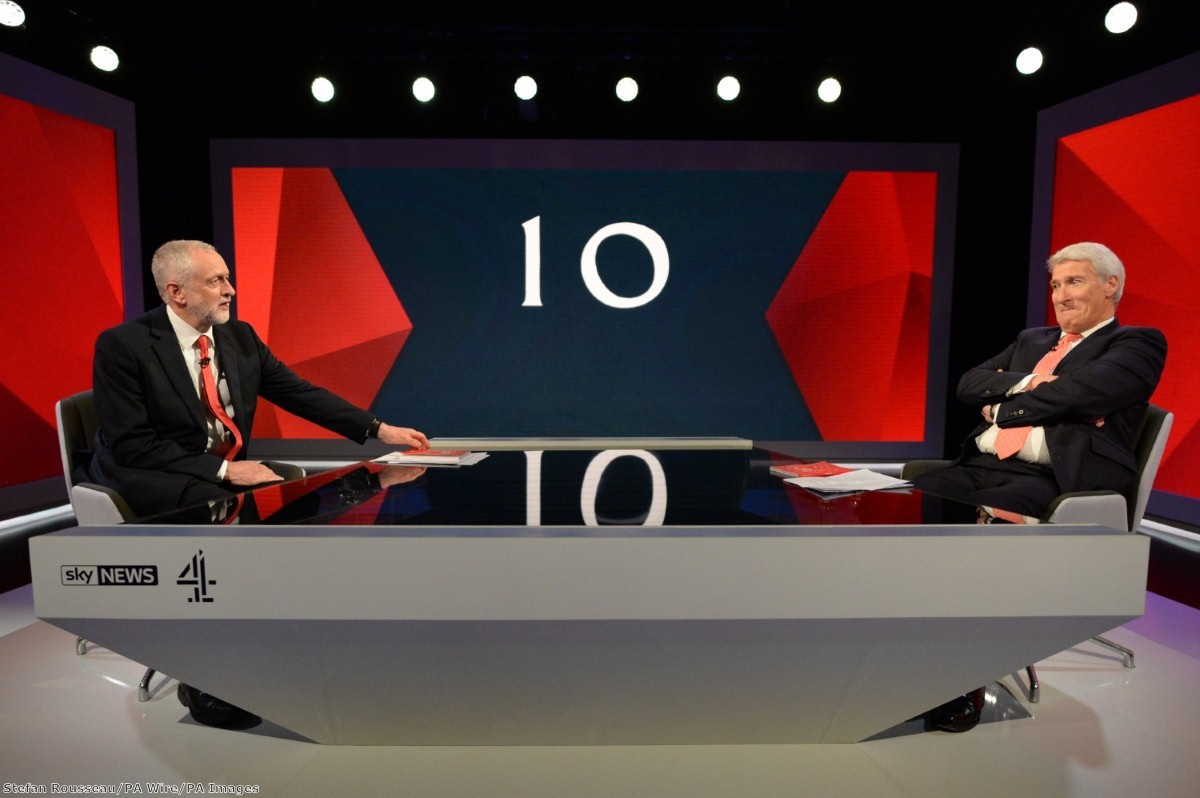 So that was the leaders' debate – sort of. Not a head-to-head but an audience Q&A for each party leader before a working over by Jeremy Paxman. Broadcast on Sky and Channel 4, here's a list of key takeaways.

Labour is in a mess over the benefit freeze

Few observers will make this their top line, but they should. Labour's position on the benefit freeze is increasingly ridiculous.

The benefit freeze – which holds working age benefits in cash terms until 2020, squeezing living standards as inflation spirals – wasn't mentioned at all in the Labour manifesto, but Jeremy Corbyn surprised everyone by pledging to scrap it out of the blue. Labour then went through four different positions on the freeze in one day, eventually concluding that it would simply cost too much money to abandon, at around £3.3bn a year.

Paxman asked Corbyn last night why he wasn't getting rid of the benefit freeze, with the Labour leader replying: "They're not going to be frozen because they'll be uprated every year."

This was a fairly clear statement that Labour will axe the government's benefit freeze by uprating benefits – presumably in line with inflation – every year.

But it's not in the party manifesto. There's no money set aside for it, in a supposedly fully-costed set of pledges. Corbyn seems to have been bounced into making a commitment he'd wanted to make, had forgotten to make in the manifesto, was stopped from making afterwards, and has no money to make now. Labour has its fifth position on this policy in two weeks. No doubt today it will have a sixth.

Can anyone in Labour's army of online warriors please explain what the bloody hell is going on?

Both leaders got roughly what they wanted

That aside, Corbyn came across as warm, personable and composed. Paxman went over the top trying to interrupt him, leaving the audience on the Labour leader's side. People watching him for the first time will not have seen the caricature the Tory press has often reduced him to.

The prime minister had a tougher time, inevitably after the dementia tax fiasco. If anything, Theresa May escaped without proper scrutiny of her costings-free manifesto.  Paxman didn't interrupt her incessantly, preferring instead to ridicule her with mocking questions as the audience laughed – landing a blow as he said Brussels would regard her as a "blowhard collapsing at the first sign of gunfire".

She was more nervous and less natural than Corbyn, but was still able to reinforce her key lines on Brexit. The more Brexit voters May can line up behind her, the better she'll do in this election, whatever pratfalls have come along the way. There was no detail but she won't care. Much of the audience ultimately backed her on Brexit and many Leave-voting viewers will have done so too.

May has worked out her line on the dementia tax

The prime minister seemed to have sorted out her 'line' on the dementia tax after the U-turn and her televised squelching by Andrew Neil.

She explained the need to put more money into the social care system and protect the assets of those entering residential care and didn't get bogged down in claiming "nothing has changed". As a policy it still has huge flaws, and there's no word on where a cap on costs might be set, but there's no longer the sensation of pulling a brick from a Jenga tower whenever someone asks about it.

The media coverage looks unduly good for May

Few who watched the broadcast would conclude that May came out on top, but the subsequent coverage has done her some favours. The BBC night time news focused on Corbyn's answers regarding the IRA and drone strikes against terrorists – not the turf he wants to be fighting on – with May under fire from the audience at times, but at least shown talking about Brexit. The newspapers that have led on the debate have gone with useful headlines for the Tories.

The one occasion May was the target of the audience's opprobrium, rather than merely their pity or mirth, was when she attempted to defend her government's cuts in funding for schools across the country. She was actually heckled for attacking Labour's costings when her manifesto has no costings at all, but it brought out how schools funding is a serious issue for millions of voters, but with little front page coverage in this election.

Yes, it happened again. This is getting silly. No-one is impressed. Cut it out.

Jeremy Corbyn is evasive, because he's a politician

Few will have been swayed, some may have been persuaded

There were no knockout blows, no stellar oratory, and it's hard to imagine anyone will have crossed from one side to the other watching last night's festivities. Corbyn's detractors will not have been sold on his explanations of his past views and links. May's critics will still regard her as a disaster.

But some waverers on either side may have been persuaded. Labour has shored up its vote in recent weeks, and natural Labour supporters who had doubted Corbyn's credentials will have found much to like in his performance. Likewise, Brexiters unhappy about the dementia tax may have had their faith in May revived. Again, both sides will have got some of what they want.