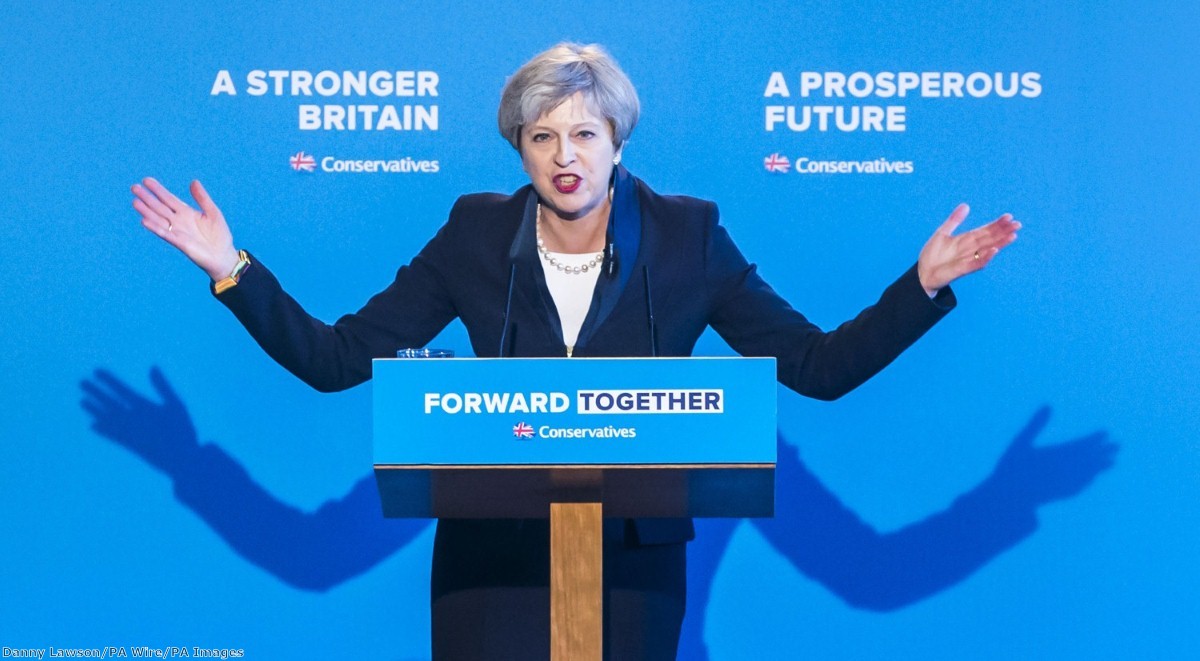 The Tory manifesto is an uncosted shambles

When Labour published its final manifesto this week, it was accompanied by a costings document showing how much extra money it would spend and where that money would come from.

The Conservatives took the figures and laid into them.

Today, the Conservatives published their manifesto. It featured hardly any costings at all.

To be sure, the Tories are pledging far fewer new spending commitments than Labour – there are significant shifts in tone, and rhetoric recalling Beveridge, but not the epochal reforms and investment promised by Jeremy Corbyn. Changes to adult care funding must be seen in the context of how few people have actually been receiving state-funded adult care.

The Conservative press office said: "W e are not promising huge sums of new public spending in this manifesto because we believe in a strong economy founded on sound money. There are some things which will cost money – but also things that will save money."

Well, ok. But it's not clear they know how much they'll be spending themselves.

On the NHS, the Tory manifesto says: "We will increase NHS spending by a minimum of £8 billion in real terms over the next five years, delivering an increase in real funding per head of the population for every year of the parliament."

What does this mean?

Does it mean what it says – £8bn of extra funding over five years, a mere pittance given the huge funding requirements of the service?

Does it mean what it might say – £8bn a year for five years, a significant commitment that would have a meaningful impact on the struggling NHS?

The manifesto certainly sounds like the former, and this is what the Tory press office said this morning. But then Conservative MP and potential post-election cabinet minister Dominic Raab told Andrew Neil on the BBC that it was £8bn each year – that means £40bn in total. Significant money.

The confusion was not limited to journalists – seasoned and respected health think tanks were working the phones, trying to decode the commitment as well.

In the end, Conservative press office has clarified that it's neither – it's not £8bn over five years, but it's not £8bn a year. It's £8bn more in the fifth year of the next parliament than now.

But what about the years in between?

And we don't know where the money will come from. Partly because we don't know for sure whether this is simply recycling George Osborne's commitment made in 2015 to spend £8bn more by 2020, in which case, large chunks will not be new money.

So we have anywhere between £8bn and £40bn with no apparent costing.

In fact, we don't know how much extra money will go into adult care over the next five years at all. And while we can guess that the national insurance rise that was abandoned after the Budget will be brought back to put an extra £2bn into the care system, we don't actually know that either.

There are other spending commitments dotted around in what is, for the most part, a do-little manifesto that is long on wind but short on concrete.

The £4bn of schools funding over five years – well short of the £8bn cuts over four years that the National Audit Office calculated in December – is covered by scrapping universal free school meals for infant school children. But there are smaller commitments without figures attached. Filling potholes and protective rural pharmacies sound like small fry, but they actually relate to the impact of substantive funding cuts. Huge reductions in council funding have seen road maintenance scaled back, while pharmacies are threatened by cuts to their funding formula. How much will these commitments cost? Where will the money come from? It doesn't say. We don't know.

Then there are the big fish. The Office for Budget Responsibility indicated last year that cutting immigration to below 100,000 by 2020 would cost the government around £8.7bn a year by 2022. Theresa May, with an obsession bordering on monomania, has committed to this immigration target with a vengeance. She has not committed to saying where the money will come from.

Also, the manifesto confirms Britain will leave the single market and customs union. This will almost certainly have a significant economic cost, for the country and thus for the government. No attempt is made to calculate the impact of this on public funding. Trust Theresa, is the message. Strong and stable. Think of England.

Does it matter? Well, if you understand government finances, no – Britain's deficit obsession looks absurd, given that the original Conservative aim of eliminating the deficit has now been pushed back from the original 2015 deadline to a whole decade later. And Philip Hammond's financial plans allow considerable 'wriggle room' in order to meet his own target. He has many billions in leeway.

But having spent nearly a decade attacking any proposed spending commitment as unaffordable – having used deficit hysteria, amplified by the media, to justify hugely damaging cuts to welfare, adult care, children's care, the NHS and plenty more besides – and having torn Labour apart for allegedly using the wrong costings, one might think the Conservatives would provide figures of their own.

But no. Anyone would think they don't actually believe their own rhetoric.