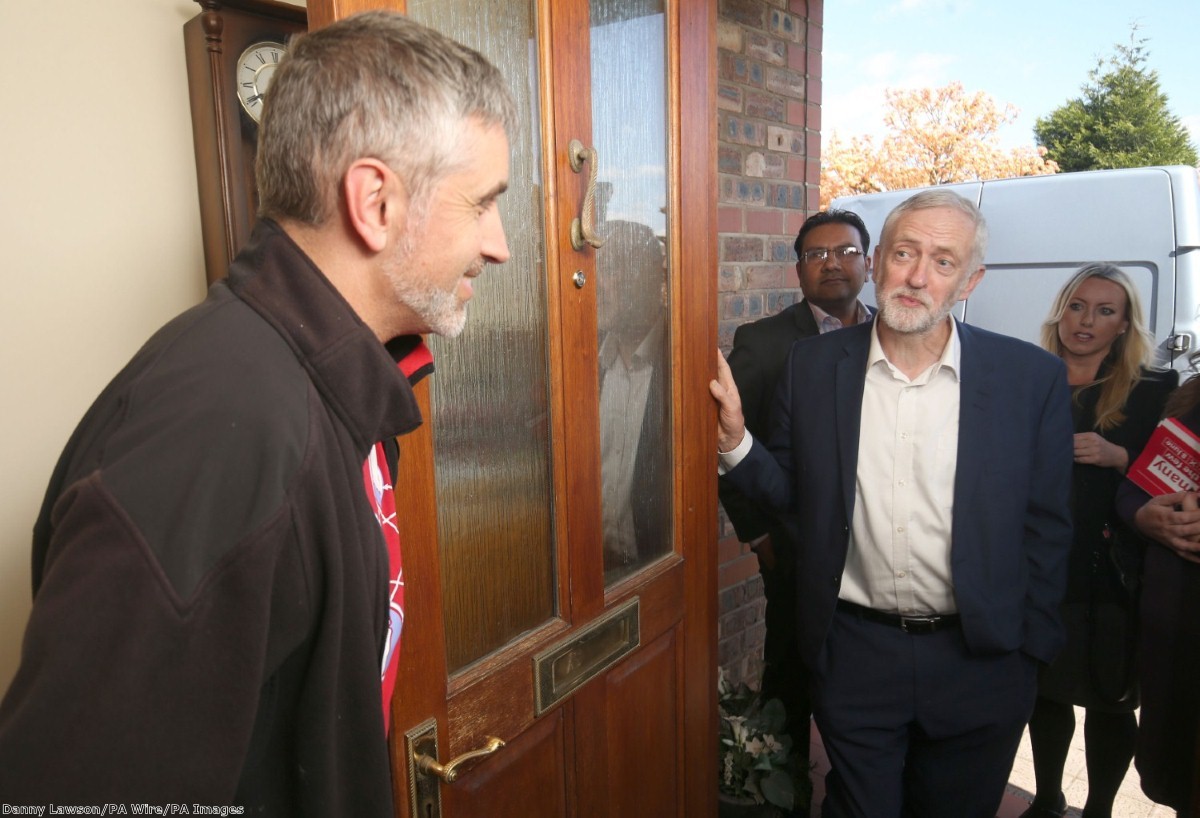 Is Labour’s strategy working? Possibly. Is it winning? No

There's a meme that seems to go round after every election, noisily touted by disgruntled backers of the losing side. You'll see a pie chart with colourful chunks for each of the main parties (or sides, in the case of a referendum), but also a great expanse of white or grey: the non-voters. This grey mass squeezes all other contestants, diminishing the differences between them and making the victor look puny. The chart is held aloft as proof that the winners didn't really win, because in fact the majority of the country didn't vote for them.

Like all the best deceptions, this is built on truths. It's trivial to show that in a referendum won, say, 52-48 on a turnout of 72%, only 37% of eligible voters picked the winning side. The message writes itself: how can there be a mandate for something that 63% didn't vote for? It's easy to leap from here to an even wronger conclusion – that all you need to do to reverse the decision is mobilise the non-voters.

In the summer of 2015, this idea seemed to provoke a certain giddiness on the left. The Tories had managed to squeak a majority in parliament with 37% of a 66% turnout (only 24% of eligible voters!) and tens, then hundreds of thousands of people were inspired by Jeremy Corbyn's leadership campaign to join the Labour party. If Corbyn could engage so many people, didn't that mean there was demand out there among the non-voters for a Labour party that looked leftward?

The evidence is taking shape before our eyes. The average at Electoral Calculus has the Tories on 49% and Labour on 27%, at Britain Elects it's 47% to 29%. As a reminder, that puts the Tories ten to 12 points up on their 2015 result and Labour down by between one and three. While it's true that Labour has gained a few points since hitting a low on April 21st (a few days after the election was called), the Tories have gained the same amount since then.

What's going on then? There are two problems with a non-voter strategy. The first is with our assumptions about what non-voters are like. The second is about what we can do about them.

First, what they're like. The fact that a non-voter did not vote for your opponent is the weakest possible evidence that what they really want to do is vote for you. Your opponent can make a mirror-image of that argument with equal justification. A more reasonable a-priori assumption is that non-voters are actually a bit like the people who did vote, just less motivated. So if they had to vote they would end up doing so in the same proportions as the voters, which gets you nowhere.

A more detailed approximation might use non-voters' demographics: do they look like the voters of one party or another? People on the left would note that non-voters tend to be younger and less well-off than voters, so there may be more potential Labour voters among them than Tory voters.

Beyond this, research among potential voters can give you more. When we poll people and they tell us they don't know who they'd vote for, or wouldn't vote, we can use other questions to allocate them to one side or another: how they feel about the direction of the country, their basic sentiment toward the parties and leaders, any past voting behavior. Our experience is that low-propensity voters are usually minded to break against incumbents. But that's the thing: even if the non-voting population is somewhat tilted in your favour, it still takes a lot of work to get them to the polls. Is it effort well spent?

This brings us to the second issue: how do we attract the non-voters? We need to come up with a message powerful enough to get them to break their non-voting habit and turn out for us. Not easy, as this requires overcoming two biases: toward default behaviours, and against doing anything when given the option to do nothing. But still: let's imagine we have such a message. What will be the impact of this message on other potential targets?

By choosing to target non-voters we've turned our backs on, for example, voters who could be open to switching to us from our opponents. We've also decided to ignore any of our own past voters who are vulnerable to being captured by the opposition. Let's not forget that, if they're smart, our opponents are actively trying to get our voters to switch to them. What if our powerful non-voter message turns some of our own supporters away? This is deadly: if every time we gain a supporter from the non-voter pool we lose one to our opponents, we're going backwards. We have to win two non-voters for every voter we lose to the opposition just to break even. It's incredibly hard going.

While this election is most certainly more complicated than the simple model described above, what's actually happening is pretty consistent with it. I pulled data from the seven most recent polls by different polling houses listed on Britain Elects (YouGov, Panelbase, Kantar/TNS, Survation, ICM, ORB, Opinium), to look at how people have changed their votes since 2015. While all the pollsters include data broken out by 2015 vote, only three of them (Survation, ORB and Opinium) show data for the 2015 non-voters. We need to take the numbers with a pinch of salt because the samples are small. Nonetheless, the 223 past non-voters in those three polls who said they will vote in the next election break 46% Labour, 32% for the Tories, eight per cent Lib Dem and five per cent Ukip.

So if Labour really has chosen to pursue non-voters, the strategy is working. The party is winning more of them than the Tories. The trouble is, those gains are dwarfed by those of its opponent, who has chosen to go after the votes of people who – you know – vote.