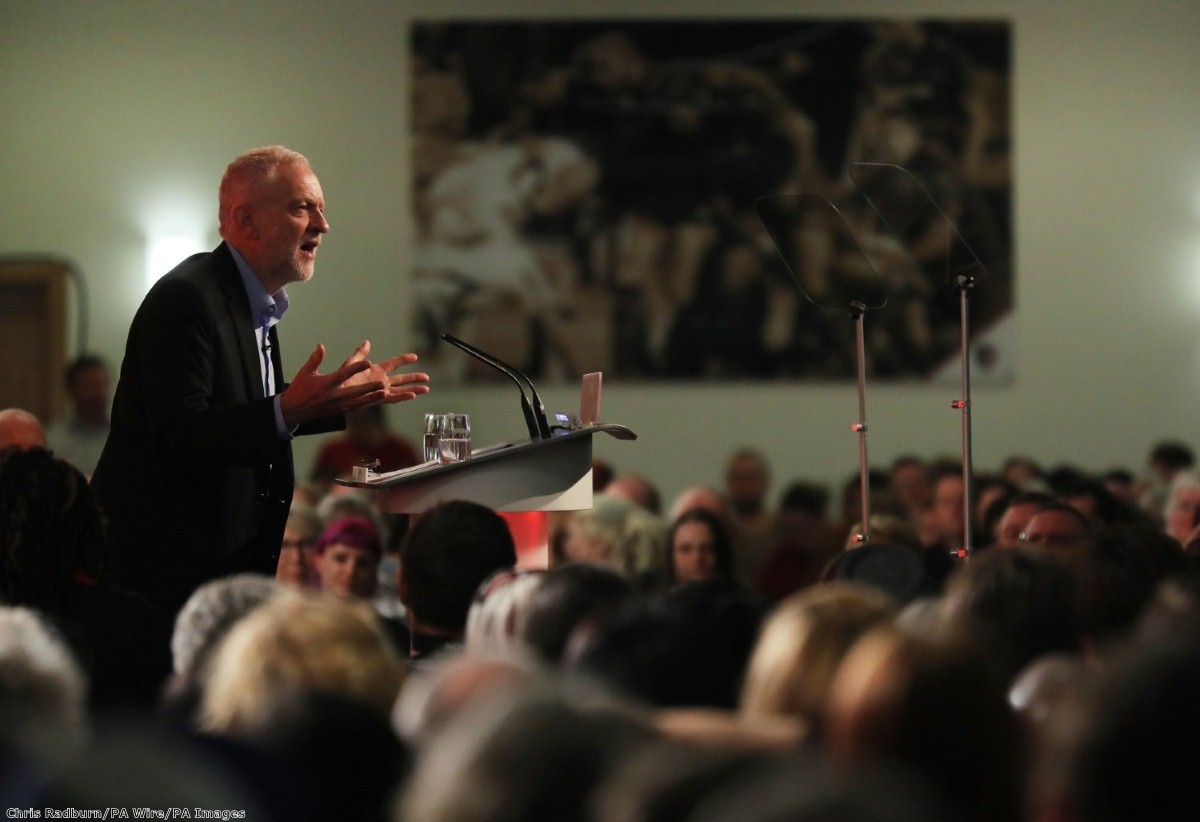 In the face of defeat, the Corbyn faithful stand firm

"Do you think you could sneak me in?" a middle aged woman asks as I arrive at Jeremy Corbyn's rally in Leicester on Saturday. She'd registered to attend the event but, like dozens of other supporters who are stood outside the rugby stadium, she's been told there is no more room.

The Labour leader's running late but the crowd of around 800 people inside don't seem to mind. When he finally arrives they are up on their feet and chanting his name.

His speech is fiery and defiant and the crowd are lapping it up. "I say to tax cheats, rip-off bosses, the greedy bankers: enough is enough," Corbyn says. "The people of Britain are taking our money back." His message to the prime minister – that if she wants to keep talking about how she's such a good leader then she should come out and debate it – gets the biggest cheers of all.

If his supporters are worried about Labour's dire results in the local elections, there is no sign of it here. "I haven't lost faith in him," one man tells me. "I've lost faith in the general public." It's a view shared by many in the room. "Maybe if he had been treated fairly, he'd be doing better in the polls," a young woman suggests.

Corbyn acknowledges the poor election results in his speech, calling them "disappointing" and saying that too many "fantastic councillors" lost their seats. But he goes on to say that the gap between Labour and the Conservatives isn't as big as some pundits had predicted.

Despite there being numerous television cameras, photographers and journalists in the room, I hear several people say they bet the media don't report the event.

As his speech comes to an end, a small group of people are still waiting outside. They tell me they are hoping to catch a glimpse of their "hero" as he leaves the building. They have a long wait, as Corbyn is inside giving media interviews. They peer through the windows to see if he's on his way down. One man spots what looks like Corbyn's car and tries to find out from the driver how long it will be until he comes out. I tell a young man stood next to me that it feels like fans waiting to see a star like Beyonce. "Nah, I wouldn't wait out in the cold see her," he replies.

They gather by one of the doors and jokingly start to sing the Red Flag. "Wait, I need to Google the lyrics," one of them says.

There's a lot written about Corbyn's supporters. They're often described as the hard-left or the metropolitan elite but outside this rugby stadium in Leicester is a group of very ordinary people. There are a few students, some young women who say they have never voted before but will for Corbyn, a disabled woman in a wheelchair, some local party activists, and a number of parents with children.

When the Labour leader finally emerges, he spends time talking with each of them and taking photos. He's far more approachable than many party leaders would be and is clearly much more comfortable away from the press. When one man asks him if his hair looks okay before the picture is taken, he jokingly fixes it for him. He laughs when another man tells him they'd met before in the men's toilet of Leicester University. A student manages to sneak not one but two kisses on Corbyn's cheek and a woman says she's "totes emosh" as she greets him.

Corbyn fixes a supporter's hair before taking a selfie pic.twitter.com/ivfoCz3Tjx

Almost all of the supporters tell him they just want to thank him. They don't say what for but it's clear he brings them something they don't feel that other politicians do. Of course, there are also traditional Labour voters turning away from the party specifically because of him. I ask the Labour leader what his message is to those people.

As he drives off and heads to Derby for his next appearance, the group all stand round smiling at each other and looking at their photos. "He's such a nice guy," I hear several times.

Many centrists within the party will be hoping that Corbyn will lose much of his support among members if Labour's defeat is as bad as predicted on June 8th. Given the reception he received in Leicester, I wouldn't be so sure.