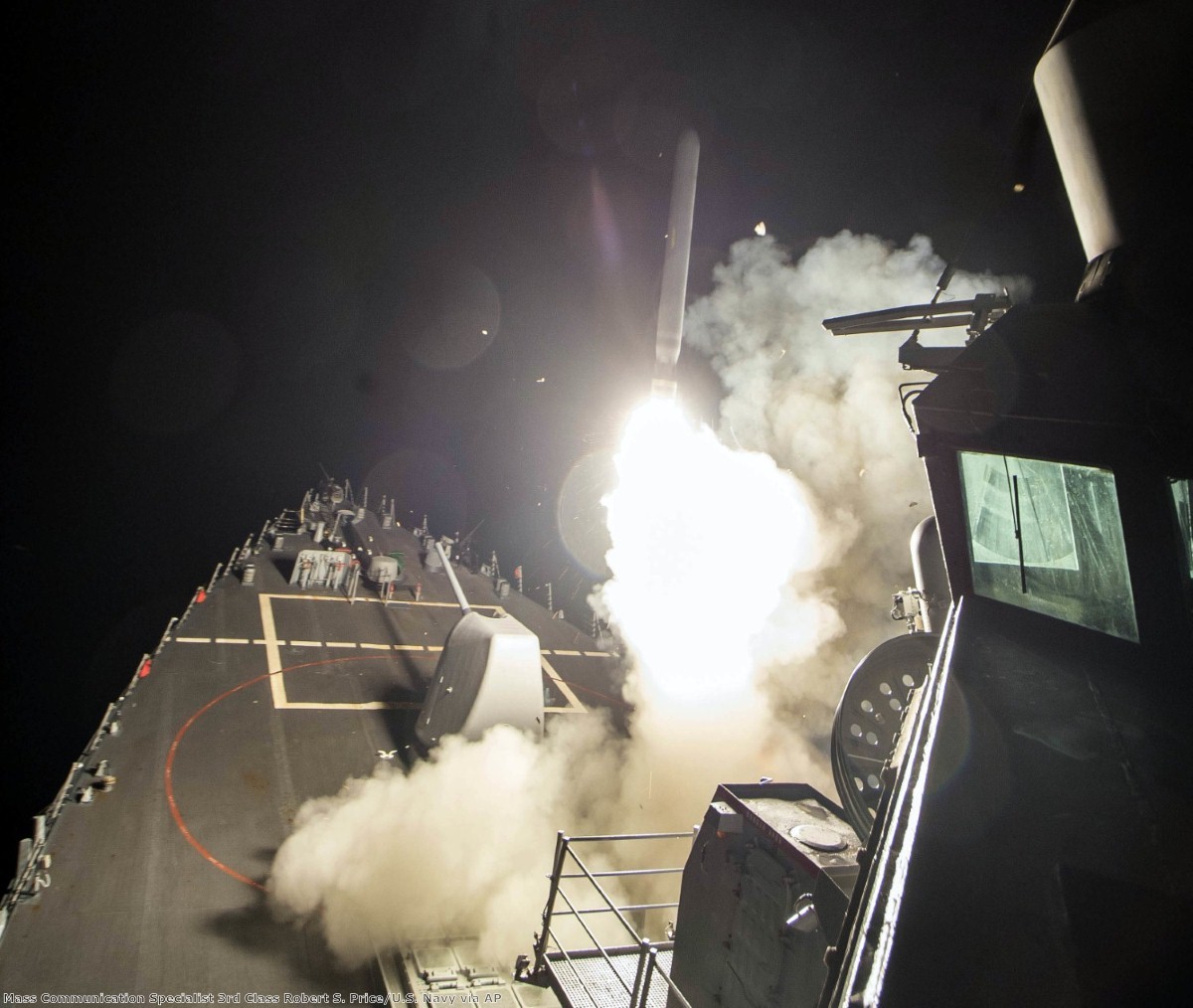 At 4:40am local time, 59 Tomahawk cruise missiles landed on Al-Shayrat military airfield, 20 miles north of Homs. The highly precise guided bombs were launched from two warships, USS Ross and Porter, in a unilateral action from the Trump administration which was not sanctioned at the UN Security Council. Members of the anti-Isis coalition – specifically France, the UK and Germany – confirmed later in the morning they had been informed of the impending attack. So was Russia, which had some of its troops stationed in the airfield.

At the time of writing, the Pentagon has not released its full assessment of the strike. While President Trump has claimed in a statement he was using lethal force as a matter of national security, this clearly appears to be retaliation for Tuesday's chemical attack on the small town of Khan Sheikhun, in Idlib province. This also tallies with his emotional description of the death of children on Tuesday. Several statements, including a joint declaration from France and Germany, mention the strike as a "response" to the use of prohibited weapons on civilian populations by the Syrian government.

What happened overnight is not legal. Chapter VII of the UN Charter is very clear that there is no room for unilateral action. There is one exclusion for self-defense under Article 51, but this requires immediate notification. For urgent action, the Security Council must approve of interim measures. Neither apply in this case.

This is completely unlike anything we've seen in this conflict. We have seen a seismic shift in policy take place literally overnight.

Until now, the coalition was focused on defeating Isis and Al-Qaeda. Iraq, as a host state to some of these operations, provided the legal requirement of consent and involved its US-trained troops in the coalition. In Syria, the war was waged from the air, in targeted strikes with little reliability.

In the last months of the Obama presidency, US special operations conducted capture missions on Syrian territory, under the legal framework of the 2001 Authorisation of the Use of Military Force, a very flexible 60-word long piece of legislation that was intended to cover any and all counter-terrorism operation worldwide.

There was condemnation of the Assad regime's atrocities, but mostly this was followed by demands for political transition. Western leaders were not considering a military attack against the Syrian government.

Khan Sheikhun changed that. It is difficult to explain why. This is not the first massacre of civilians committed by the regime. This is not even the first – or the second – chemical attack perpetrated by Syrian forces. In fact, it was only possible because the regime did not fully cooperate with a Security Council resolution to entirely decommission and then let authorities inspect and remove its chemical weapons.

It may well be that this change in policy has taken place simply because Trump saw images on TV which upset him. But whatever the reasons, the Western swerve towards the direct targeting of military facilities run by the government happened this week. And it didn't happen at the UN. It happened at Trump's Mar-a-Lago retreat.

This is a move which profoundly undermines international law. It shows you can sidestep the Security Council.

That's deeply troubling, but the Security Council has only itself to blame. It has been nuetralised by Russia throughout the Syrian crisis. For years, any attempt to pass – let alone enforce – a resolution which could have saved millions of lives in Syria was blocked by Moscow's veto.

It's not a new problem: abuse of veto power at the Security Council has plagued the organisation and its authority for decades, as illustrated by the permanent US blockage over Gaza. Attending and observing Security Council meetings over Syria has become a grueling and emotionally taxing exercise. Ambassadors take the floor, recalling in great detail the immense suffering of Iraqi and Syrian civilians. They have been met with mute determination from successive Russian ambassadors.

Matthew Rycroft, UK ambassador to the UN, has repeatedly attributed responsibility of crimes to the Assad regime. But the Security Council, even though it acknowledged its failures, never reached a situation in which it could provide for its own mandate of protecting and ensuring international peace and security.

It failed. Repeatedly. And by being paralysed, it legitimised unilateral action by the US. Now we have to live with what that entails.

Sarah Kay is an international human rights lawyer specialised in counter-terrorism and armed conflict. She currently works on evaluation and assessment of EU counter terrorism policies.