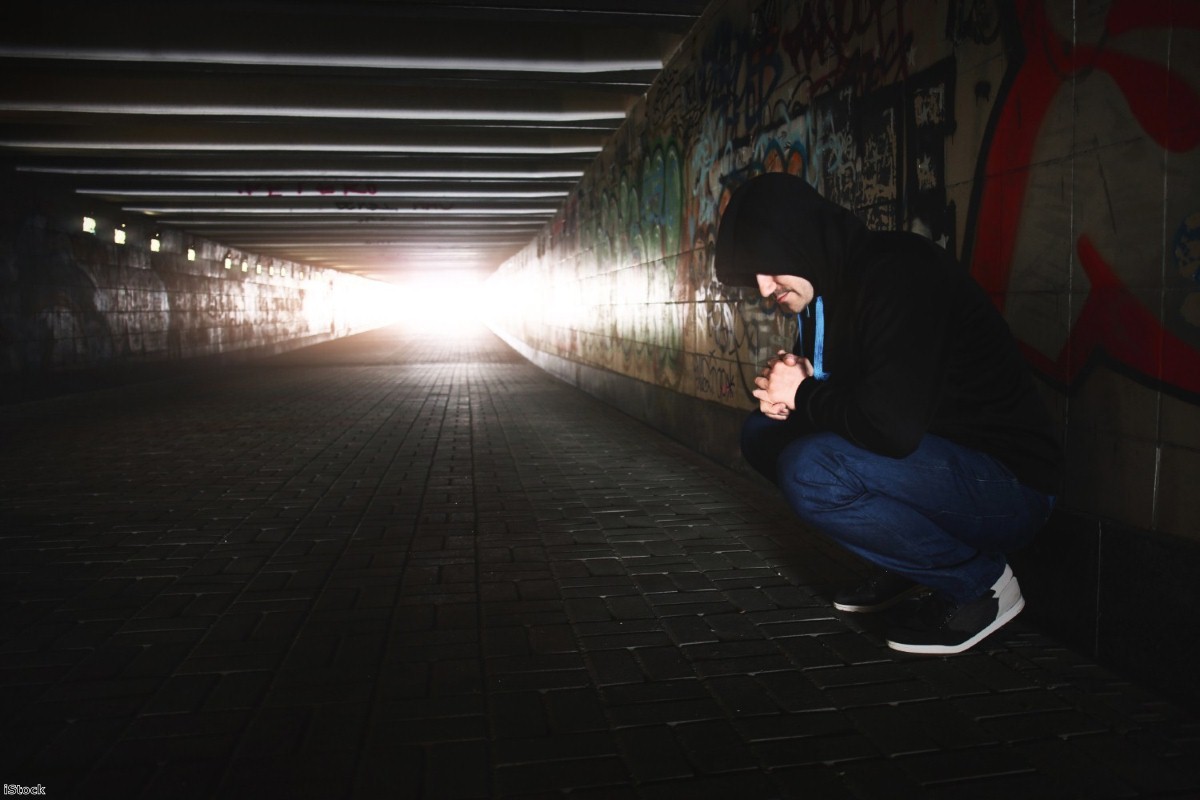 In 1677 Dutch philosopher Baruch Spinoza wrote: "We always strive toward what is forbidden and desire the things we are not allowed to have. He who tries to determine everything by law will foment crime rather than lessen it." It's a lesson which has been proved again and again in drug policy and it's being proved once more in the wake of the Psychoactive Substance Act.

The law, which banned the sale of so-called legal highs in high-street head shops, had many critics, including the police, homeless services, drug treatment centres and prison officers. They argued that it would push the trade of psychoactive substances underground, benefiting unscrupulous dealers and overburdening already overstretched police forces. And that's exactly what happened. In prisons and among the homeless community, the two largest and most vulnerable user groups, the ban has made the problem worse.

Last December, six months after the Act came into force, the Home Office was trumpeting its success. More than 300 shops were stopped from selling psychoactive substances, 31 were forced to close, and four people received prison sentences.  But look beneath the surface, and things are not as upbeat as the government would have you believe.

Psychoactive substances with commercial or medical use have been barely affected.

Nitrous oxide, or laughing gas, is used as an anaesthetic by dentists and by the catering industry to whip cream. Demand and supply for laughing gas hasn't declined and even large online retailers Amazon and eBay have taken no notice of the change in law.

"There has been absolutely no change – it is very easy to buy it through the regular internet," says Bob, who uses laughing gas to avoid hangovers. He simply ticks a box acknowledging that the ingestion of nitrous oxide is illegal, says he will use it for cooking, and he gets a box of 20 canisters delivered to his door.

The act has succeeded in hiding the problem, but arguably exacerbated it by pushing production and sales of the most dangerous substances underground.

This is particularly true in the case of synthetic cannabinoids receptor agonists, known by one of their popular brand names of Spice. These aim to mimic the effects of cannabis but are much more potent, unpredictable and dangerous. Effects include psychosis, hallucinations and vomiting, aggressive and violent behaviour, coma, and death. New psychoactive substances (NPS) such as Spice caused 204 deaths in 2015 alone according to official figures, along with a spike in hospitalisations.

Spice has numerous pros for its users: it is much cheaper than cannabis, its effects last longer than heroin, and many of its varieties still don't show on urine tests, making it the drug of choice among prisoners. And the ban simply shifted its sale from over the counter to the streets.

"Dealers added it to their repertoire," says Henry Fisher, director of drug policy think-tank VolteFace. Unscrupulous individuals realised they could buy kits on the dark web from China for a few hundred pounds and saw a market opportunity. "They're not terribly worried about how potent or how dangerous individual batches are. It makes these substances stronger and more unpredictable."

Among the homeless population it became popular after it was banned, according to Mike Nicholas of London-based charity Thames Reach. "It is quite worrying. They become erratic. People trying to provide support are endangered. We were aware of an assault on a member of staff from someone who was using psychoactive substances and was normally very well behaved."

Official figures show a 16% increase in homelessness in 2016, with London accounting for most of it. Westminster, the council with the highest homeless population in Britain, is facing a Spice epidemic. "We have to call an ambulance two to four times per month," says Valentina Forasassi, a social worker at the Look Ahead homeless hostel in Vauxhall, where most guests smoke Spice. "The ambulance service does not even keep a record of how many Spice related calls they get from us. We called them more than 20 times since January".

She complains that emergency and police services are not knowledgeable about new psychoactive substances. "There is a wrong conception that it is less dangerous, but you see people really deteriorating even more than if they are using heroin. People think it's better for them because it is just a spliff, but it's not."

Some users reportedly smoke Spice to ease their withdrawal from heroin, but there are also reports of users switching from Spice to heroin, which they see as more reliable. "If people start to use heroin more through Spice, that opens up a worrying question of whether more young people could move back to using heroin again," says Fisher. "Up until now we've seen a gradual reduction, that could potentially reverse."

With unscrupulous dealers pushing unpredictable drugs and rising levels of homelessness the Spice epidemic is, if anything, getting worse.

Prisons face a similar situation. Last September Nigel Newcomen, the prison and probation ombudsman, attributed 58 deaths in custody between 2013 and 2016 to new psychoactive substances. "NPS have been a game-changer in terms of reducing safety in prison", he says. Their ready availability and cheap price makes them attractive to organised crime. The drugs are thrown over walls, passed on by visitors or corrupt stuff, or smuggled in by drones (Wandsworth prison spotted two a week in September). Some even commit petty crime to get arrested and smuggle Spice into prisons.

Helen Boothman is the chair of the members' association of the Independent Monitoring Board for Prisons, a volunteer-run body reporting on quality of prisons throughout England and Wales. "In the last 12 months, all reports speak of drug issues, and by and large that is new psychoactive substances," she says. "I don't think the law has changed anything."

Spice-related incidents drive an increase in ambulance callouts. This adds to the problem of staff shortages. "When an alarm bell goes off, officers all run to the incident, and if an ambulance is called, two staff have to get taken off to escort. That is where the pressure points are."

Due to lack of staff, prisoners often sit in their cells for 23 hours a day, don't engage in education or work, and even regular housekeeping programmes including drug testing and suicide counselling stop running.

Researcher Anna Norton interviewed prisoners and prison staff near Manchester, where 85 to 90% of inmates were using NPS. "It has definitely been driven underground," she says. "Now it is a much bigger issue in terms of the harm it is causing and the chemicals used."

Boredom is driving drug consumption in prisons. A prisoner interviewed by Norton said: "It's boredom, when you're literally bored in your cell at night you just pick up a drug and smoke it." Because of the unpredictability of its effects, Spice offers a source of entertainment, and prisoners will try it on themselves or spike other inmates – particularly the most vulnerable.

"Sometimes prisoners would be given a normal cigarette with a lot of Spice in the end. I guess it has a comedy value in it," says Norton.

Prison officers are often the victim of assaults, and they are also suffering from seeing increased levels of violence, suicides and self-harm linked to new psychoactive substances from formerly well behaved prisoners. "The emotional strain is quite high," Norton found.

A Prison Service spokesperson said: "We are committed to improving safety across the prison estate and take a zero-tolerance approach to drugs". As part of the new Prison Safety and Reform White Paper tackling the rise of violence, 300 dogs have been trained to detect psychoactive substances, and staffing levels will increase by 2,500.

But according to Helen Boothman this is nowhere near the staffing levels of ten years ago – before austerity-led cuts to the prison budget – and falls short of what’s needed. Roger Swindells, independent monitoring board chair at Birmingham Prison, warns that the declining availability of drugs like Spice will cause rising levels of debt, criminal activity and associated violence.

The irony is that Spice was invented to circumvent the ban on cannabis, by producing a stronger chemical equivalent. "Spice is the product of prohibition" says Lee Harris, former owner of Alchemy, London's oldest head shop which closed two years ago. Outlawing Spice has created a market opportunity for illegal trade, with dire consequences for the most vulnerable. Echoing Spinoza's warning, he said: "If you put things in dark areas, like the dark web, and ban things, you build up criminal markets."

That's a lesson Britain has learnt many times over during the war on drugs. It is now learning it all over again in the wake of the Psychoactive Substance Act.

Paola Tamma is a multilingual investigative journalist based in London.