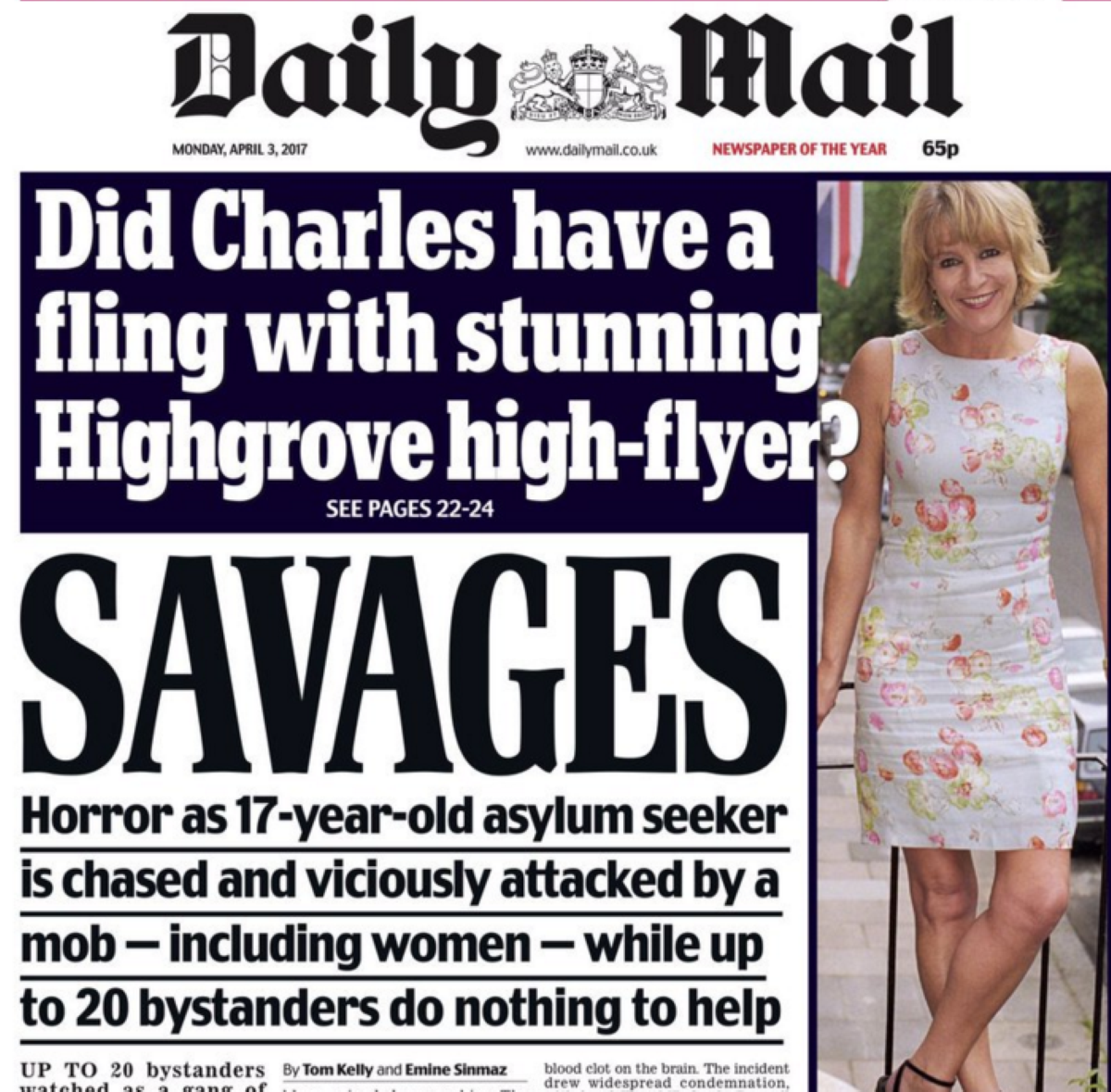 Call out the Daily Mail’s hypocrisy over asylum seeker attack

The Daily Mail is outraged by a recent attack on an asylum seeker. "Savages" screams their front page today as it goes on to draw parallels between this case and the Stephen Lawrence murder. The hypocrisy of a newspaper that has spent years demonising immigrants and asylum seekers now acting shocked that something like this could happen is striking.

Of course, the only people responsible for this attack are those who carried it out. We all have choices, and no matter what has gone before the people who decided to chase and beat that young man are the ones to blame for theirs. But it would also be naive to pretend that the climate in which it has happened has not been created, in part, by sections of the right-wing press, including the Daily Mail. Just look at some of the headlines it has splashed across the front page over the years:

"Migrants: How many more can we take?"

"Asylum: You're right to worry"

"4,000 foreign criminals including murderers and rapists we can't throw out"

"The 'swarm' on our streets"

With newspaper sales in decline it's easy to believe that that they no longer hold the power and influence they once did but you only need to see how desperate politicians are to keep editors on side to realise that this is not the case. Just because people don't buy a regular paper anymore doesn't mean they don't see them. The front pages are everywhere you look. In corner shops, at train stations, in the supermarket, left on a seat of a bus, in waiting rooms, in coffee shops and greasy spoons, and discussed on numerous TV and radio programmes throughout the day.

When a journalist comes under attack for a headline to a story, they usually ask their critic if they have bothered to read the actual article. I am probably guilty of this myself. But the truth is – and journalists know it – that most people don't read the articles and of those that do, the majority will only read the first couple of paragraphs before glancing away or turning the page. We can shrug our shoulders of any responsibility in the knowledge that all the details to the story are there if only people took the time to read them, but that won't change the reality. And it doesn't absolve the media from guilt when looking at the climate their front pages and headlines have helped to create.

I live outside of the so-called Westminster bubble. Everyday, whether at the school gate, socialising with friends, or spending time with family members, I speak to people who do not consume news and politics in the way that I or my colleagues do. I hear the bits they take away from big news stories, the messages they take from press coverage. And it is often, unsurprisingly, the most persistent media narratives that stick. Why should their taxes pay for someone to sit around watching Jeremy Kyle every day? We're a small country, we can't take any more migrants. We can't risk letting people in who might be terrorists. The EU is stopping us from making our own laws.

These beliefs don't make them ignorant or stupid, they make them human. After Brexit, the media was full of commentators trying to understand the people who voted to leave. Their answer was usually that the working class were fighting back against the establishment or that people wanted to take back control of our borders. Both are probably true, but very rarely was press coverage mentioned. If all someone's heard for years is that the EU is bad, why would they suddenly think differently just because Remainers spent several months telling them to do so? It's the same with immigration. Given the level of hatred spouted by sections of the press, it would be more surprising if there wasn't an anti-immigrant climate.

Every time a migrant commits a crime, it's reported not as a man raping a woman or as a teenager mugging a pensioner but as a 'migrant' raping a woman, a 'migrant' mugging a pensioner. This doesn't happen with any other group. We wouldn't see the word migrant swapped with 'white man' or 'black teenager'. It leads to a feeling that migrants are disproportionately involved in crime. It leads to a climate of anger and fear of newcomers. And it leads to an environment where violent thugs will choose their target based on a person's skin colour and accent, because they think they deserve it.

Nobody other than those thugs are responsible for their violence. The Mail has never encouraged people to be violent. But when you push out a constant stream of angry coverage about immigrants, don't be surprised when the more deranged among us act on it.

Newspaper editors and journalists are not stupid. They know which headlines will get people talking or make them angry. In 2017, we wouldn't accept such blatant hatred towards black people, gay people or women. We should no longer accept it against immigrants.