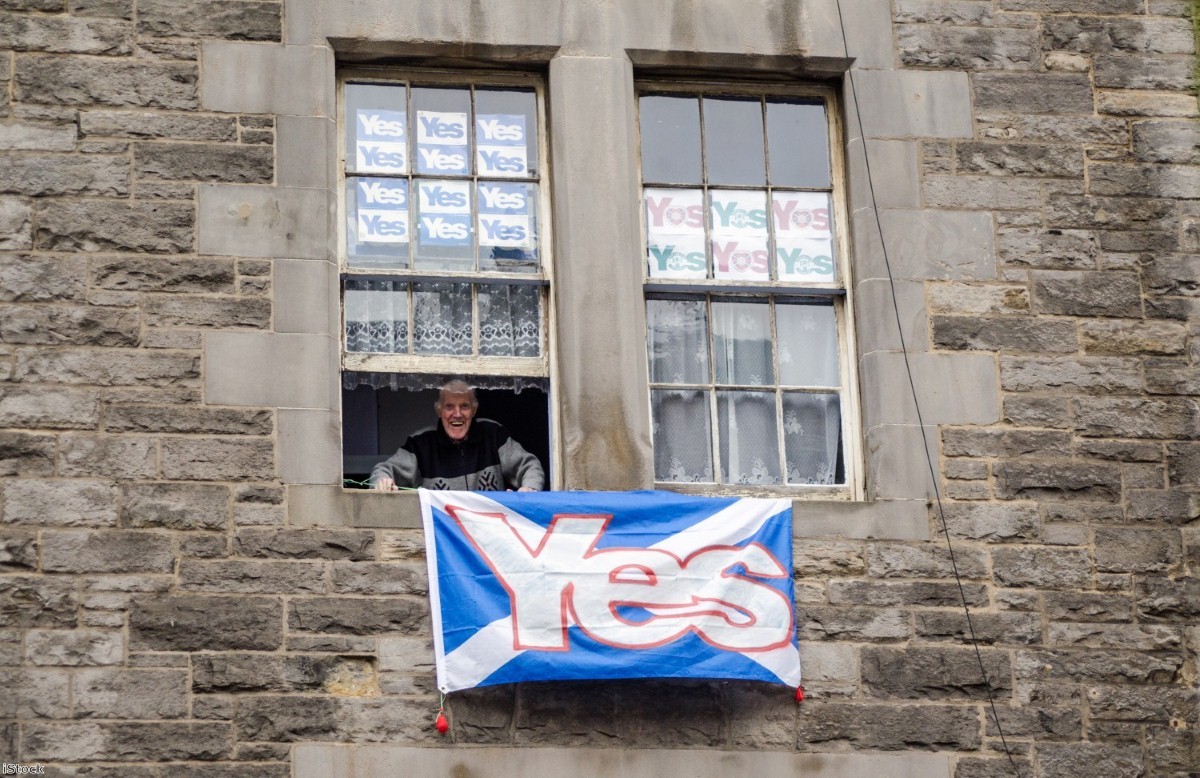 The English left should stay out of the Scottish independence debate

Change your life – become a customs officer. They'll be all the rage in a few years time, as Britain's post-imperial neurosis shuts out its neighbours and carves itself up. In the wake of a hard Brexit and the slow motion car crash on the Irish border, the Scottish government wants out of the imploding British union.

One can hardly blame them. Since the morning after the first independence referendum three years ago, the thin-skinned tyrant of English nationalism has treated Scotland with nothing but contempt – English Votes for English Laws, hysterical Tory election posters demonising Scotland's largest party, voting for Brexit, ditching the single market against the express wishes of First Minister Nicola Sturgeon, and generally behaving like an abusive husband who's hidden the new PIN for the joint bank account.

Now that Sturgeon has demanded a second referendum, the Westminster Right swings between snickering at the supposed naivety of the silly "nats" and raging at their refusal to enthusiastically partake in our brave new Brexit Britain – all the while sneering at the supposed subsidy junkies north of Hadrian's Wall.

The English Right are thus imposing their own assumptions, prejudices and priorities on the inevitable second Scottish independence vote – Brexit uber alles, as with all things, plus the perennial gripes about the Barnett Formula. Scottish Conservative leader Ruth Davidson – always described as "impressive", which appears to mean "vaguely coherent" when applied to politicians – may find her biggest obstacles leading the No campaign come from the braying Tory backwoodsmen south of the border.

But however boorish the response of the English Right, the reaction from the radical Left is worse – less overtly abhorrent, but more cynical and pernicious. Because just as in 2014, the English Left thinks this is their referendum.

In 2013-14, during the first referendum campaign, many radical English left-wing activists went up to Scotland to join the independence movement. It was an odd sight – not so much why weren't they campaigning for the union, as why were they sticking their oar in?

The answer, in a word, was projection. The English radical Left decided to turn the 2014 indyref into a niche political porno. There was no fantasy they could not imagine an independent Scotland fulfilling. Scotland was a caged socialist tiger waiting to be unleashed – apparently. It was Westminster that was preventing mass egalitarianism, rather than the Scottish middle classes' reluctance to see Holyrood use its tax raising powers. The Scots didn't want Trident. The Scots supported welfare. The Scots would nationalise everything. Sod England – having been rejected by voters at election after election, English socialists would fight for Scottish independence and then flee there to build their new Jerusalem in Scotland's green and pleasant land.

We will no doubt see this repeated over the coming years. Scotland is, of course, more pro-EU than England – though certainly not Europhile. Its politics are also more left-wing than England's, with a centre left government of the European social democrat style – but again, the idea that Scots are uniformly, or even mostly, sympathetic towards benefits claimants and the such like is unsupported by evidence.

The English Left has scrawled its own caricature of Scotland and declared it a carbon copy of the real thing. The reality is Scotland, like any other country, is politically complex, varied, and at times fickle – Alistair Darling was proved entirely right in his warnings over oil prices in 2014, but neither he nor Scottish Labour will ever be thanked for it. The Conservatives meanwhile are resurgent and set to become the main opposition in a land where their name is supposedly – at least according to lefty folklore and nationalist diatribes – nothing short of an obscenity. All this is completely absent from the Red Clydeside nostalgia dredged up by the pro-independence English Left.

The "new Jerusalem" brigade are at least well meaning, in their way – they look at England's politics and beg for an alternative. Well, so do many of us. But then there are the accelerationists – political pyromaniacs whose agenda is chaos from which they may profit, a kind of "disaster socialism" to mirror the disaster capitalism Naomi Klein wrote about in The Shock Doctrine.

This breed of left-wing activist pinned their hopes on Scottish independence in 2014 as a deliberate means of sending the union into meltdown. Their view is that if the union goes into meltdown, so does capitalism and imperialism. Presumably they assume such a chaotic process would be painless for those they claim to represent. Or maybe they don't care, so long as the castle walls are breached so that they may storm them.

James Meadway is now an adviser to shadow chancellor John McDonnell. In 2014 he was still an activist with the SWP offshoot Counterfire, very much in opposition to the Labour Party – and very much in support of Scottish independence.

"My entire adult life has been spent living in a country that is either bombing, invading, or occupying one place or another, with appalling consequences," he said prior to the 2014 referendum.

"Breaking up this warlike [British] state, undermining its capacity to act abroad – as Scottish independence will – will be a huge gain for the world."

On another occasion, Meadway explained his support for independence thusly: "The greater a constitutional crisis can be provoked inside the UK, the greater a chance we have of establishing something outside of the Westminster circus; and there's no doubt that Scottish independence would provoke something of a crisis for the Labour Party itself."

Meadway, and others like him, support independence on economic grounds as well – but Scots might find it curious that they were expected to go through the severe challenges of secession partly so that the ensuing chaos in Westminster would give English radicals an opening, while denying the US an extra hanger-on the next time the White House goes to war.

As for that economic case – there has been little circumspection from those pushing the independence case north or south of the border about how flimsy their case was. Their boisterousness over oil prices takes on Brexit levels of dishonesty given what has happened since – had Scotland voted Yes in 2014, it would now be the world's newest financial crisis.

Of course, for the English left that is mere detail. Some never believed the Scottish economy would be at risk; others just viewed initial strife as a teething problem on the way to future sunlit uplands, not unlike the fanatical Brexiteers or austerity fetishists they so often decry. The practical realities of fashioning a new independent state were swept aside by essentially "foreign" activists plugging a radical socialist future that, as Corbyn's struggles in Scotland show, few Scots appear to actually want.

Much has changed since 2014, of course. The SNP, having misjudged key planks of their argument last time round, has had longer to hone its blueprint. Brexit transforms the landscape – the economic case for independence is far more compelling than it was three years ago. But whenever Scotland gets its vote, its people will have a complex set of risks to balance and a difficult judgement call to make.

And they will have to make it for their own future, unlike those who wish to project their own agendas from elsewhere. For outsiders to see Scotland as their pain-free lab for radical economic experiments is no less contemptuous than the braying barons of Westminster.