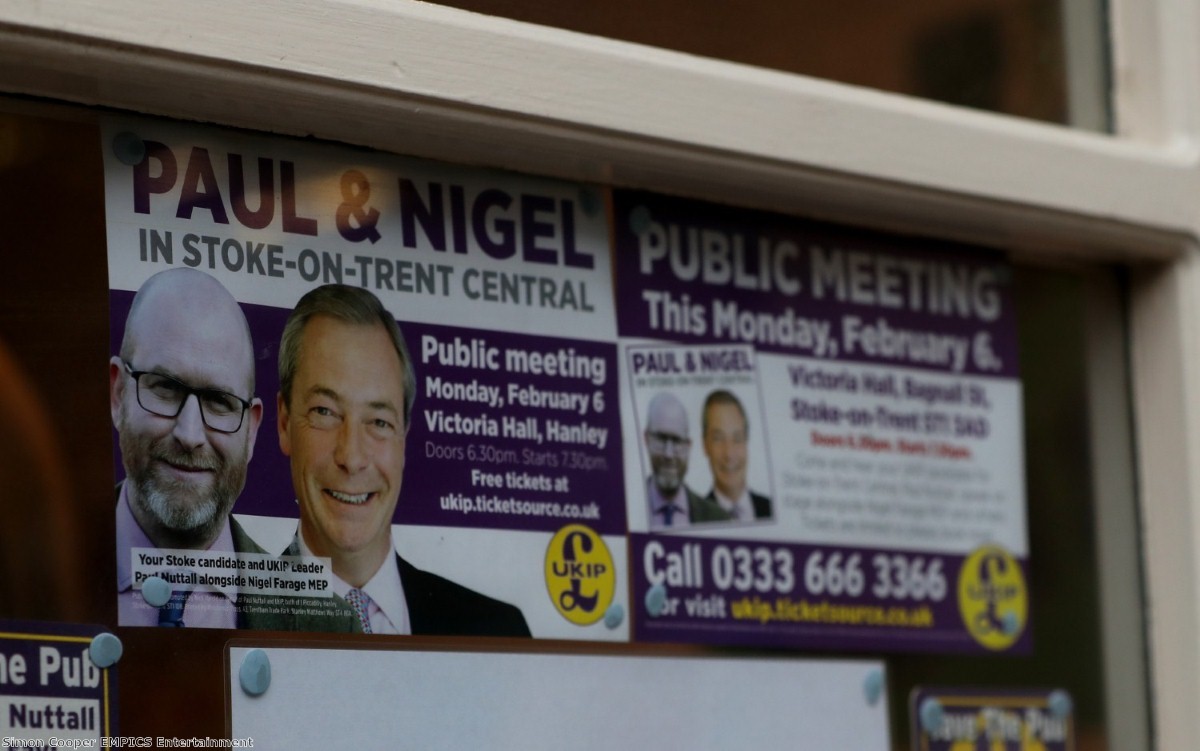 The Battle for Stoke: Why are we splitting the progressive vote?

In days like these, you'll accept any chink of light. Over the weekend we saw reports of efforts to coordinate a progressive alliance between Labour, the Lib Dems and the Greens in Stoke to keep out Ukip candidate Paul Nuttall.

As a Green, I stood aside in Richmond Park so the Lib Dems could defeat Zac Goldsmith. Now there are signs that type of attitude could take root elsewhere. Despite all the acrimony over Labour's support for hard Brexit, this period of sweeping right-wing authoritarianism could still spark a new unity on the left.

Just over a week ago I did a speech at a Brexit event. The first words were: "What a seven days it's been." I was talking about Trump's inauguration, his first few executive orders, the global women's march and the verdict by the Supreme Court over Article 50. Today, I could start it in the exactly the same way, but this time I'd be referring to Trump's Muslim ban, the consequent rallies in the UK and US, parliament voting to allow Article 50 and the Brexit white paper.

All I have been able to do is watch in horror as events unfold, sign endless petitions in the vague hope of changing things and share my despair on social media. This is what it feels like to have politics done to you. This is what it means to have no power, no voice and no ability to effect change.

Since the million-strong march against the Iraq war, which only served to highlight the people's inability to change the government's mind, I have lost faith in the power of demonstrations. May's speedy statement that her invitation to Trump still stands backs this up. In fact, I have little faith in the impact of emails to MPs, letters to editors, signing of petitions or any other means of putting pressure on our elected representatives. Unless I am the elected representative, I cannot have an impact on the direction this country takes.

This is why I joined the Green party, and stood for election as local councillor, member of parliament and London Assembly member. I can't keep asking the wrong people – Conservatives, Labour or Liberal Democrat – to do the right thing. They won't. They have their own agendas, and until I and other Greens get into power we cannot alter the path this country on.

Then came the by-election in Richmond Park of December 2016, brought about by Conservative MP Zac Goldsmith's resignation over Heathrow. That was the seat I was targeting. I stood against him in 2015, but the residents loved him so he was returned with a huge majority. Then he stood for London Mayor with a racist campaign that dented his popularity and backed Leave in the referendum. Goldsmith's father had actually set up the Referendum party, the precursor to Ukip.

Yet Richmond Park had one of the highest Remain votes in the country. We had to get him out. We had to show this government that we didn't want Brexit.

I wanted to stand for the Green party. We needed that opportunity to explain our policies, to tell voters why we're different, to say why we're the only ones they could trust over Heathrow. But this was not a general election, it was a unique opportunity to oust a Leaver from parliament, reduce the government's majority, and maybe, just maybe, alter the course of events in the way the Ribble Valley by-election did.

The Green party decided to stand aside and give the Lib Dems a clear shot to run on a Remain ticket. If we'd stood, what would we achieve? Likely nothing more than to split the Remain vote between us, the Lib Dems and Labour, who at the time hadn't come out for Brexit so clearly.

We actually had more power by not running. Denying myself and the Green party a platform had more impact than if we had run. It became about us not standing and why, about alliances and Brexit, rather than Heathrow. I hated not standing – I was denied the opportunity to speak at hustings. It felt awful. Yet our very silence became a symbol.

And we did make a difference. By polling day, Labour were telling people not to vote for them, and when the results came in they got less votes than they have members in Richmond Park. Voters are clever enough to know which way the wind is blowing and to make decisions for the greater good.

If only more aspiring and sitting politicians on the left and centre would do the same. In the Stoke-on-Trent Central by-election, Labour, Lib Dems and Greens are all standing against Ukip leader Paul Nuttal. Yet the Conservatives seem to be giving Ukip a clear run, hoping he will defeat Labour in its heartlands.

This is the time for a progressive alliance. Labour, Lib Dems and Greens should be working together in seats like this to take on the Conservatives and Ukip driving us towards the cliff edge. And there are now glimmers of hope that the sense of national political responsibility shown by the Greens in Richmond might be found in the Labour party. Figures in Corbyn's leadership team are informally exploring options for them to work with the Lib Dems and Greens to defeat Nuttall. That's a welcome sign. Cooperation and solidarity are a better option than all of us splitting each other's vote.

There can only be one winner in a by-election. If there's ever a time for all politicians to recognise that sometimes you are more powerful when you are silent, this is it.

Andree Frieze is a journalist and community relations officer for Jeevika Trust, an overseas development charity. She is also a Green Party activist, and stood in the 2015 general election for Richmond Park and for the South West constituency in the 2016 London Assembly elections.