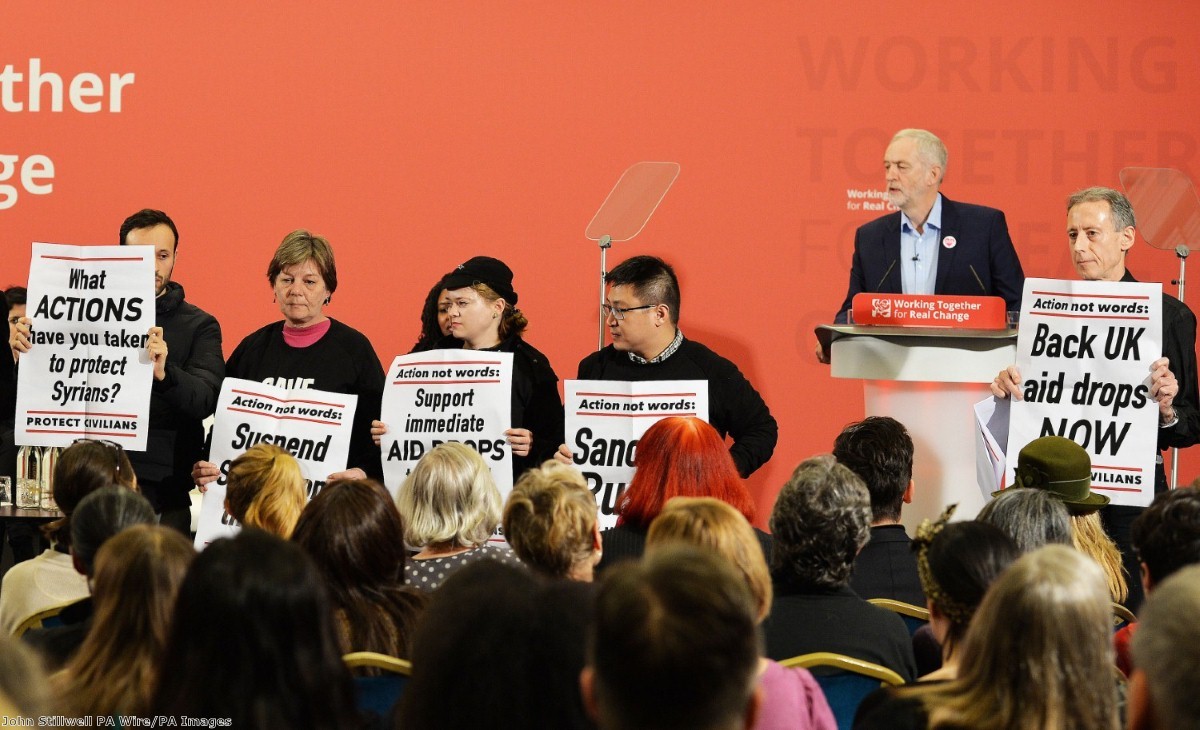 Dear Peter, all your protest achieved was to detract from women’s issues

An open letter to Peter Tatchell from historian Louise Raw.

Let's cut to the chase here- what the blue blazes did you think you were doing on Saturday? I've already asked you this directly, but none of your responses have explained this apparent new tactic of protesting people who agree with you.

All sensate human beings should care about the devastation of Syria and its civilian population. Certainly, Jeremy Corbyn appears to: over a year ago, he held then-PM David Cameron to account with a lengthy intervention in parliament. Corbyn spoke about a Syrian refugee constituent of his, Abdulaziz Almashi from Manbij city, who was desperately concerned for the safety of family remaining there. Isil couldn't kill them, Mr Almashi said, but he was concerned Cameron's air bombardment might. You are supposedly on his side –  but you didn't lobby Theresa May or the actual foreign secretary, Boris Johnson, who are responsible for policy.

Corbyn is well-known for his record on human rights and against war. He was, in fact, about to speak about Syria on Saturday too, when you popped up. He was going to highlight the particular plight of Syrian women and girls, who make up more than half of Syrian refugees, and who have been shown to be more at risk of both sexual and physical violence during the conflict, as they are in all conflicts.

Perhaps the press would even have reported that, had you not interrupted, holding a placard demanding aid drops for Syrian civilians. Aid drops which Corbyn's shadow foreign secretary, Emily Thornberry, who was on stage with him has been calling for for over a year.

Leaving aside your counterintuitive choice of target, you are a seasoned media player: you could have predicted in advance the headlines resulting from your action, that they would feature your name prominently, and the other activists with you would be ignored; that the majority of the press would use it as an excuse to criticise Corbyn (again) and that Syria would be mentioned only in passing. And so it proved.

If you did nothing for Syria, though, what you did achieve was the derailment of a vital and historic speech. Corbyn spoke in a way that was absolutely unprecedented about the rights of women, which he placed at the heart of both this speech and future Labour policy. I've done the maths so you don't have to, Peter: he mentioned women and girls and their concerns sixty five times. That simply doesn't happen in general speeches by party leaders.

As a human rights activist, I assume you know the extent of the problem we are up against: that violence against women around the world is now both so routine and so extreme that the UN has called for 'femicide' to be a recognised crime. That this year police forces in the UK began to trial treating violence against women and girls as a gender-based hate crime. That in England and Wales it is estimated that 85,000 women are raped annually. That two women a week are killed by male partners and former partners. That many more are brutalised and terrorised, both physically and emotionally, on a daily basis.

I'm not here to protest against protest- as the Daily Mail will tell you, I'm an arch whinging leftie feminist, placard ever at the ready, sense of outrage finely honed. Like you, I have been excoriated for it in the press and personally. I've had death threats, but also a ton of rape threats too. That's what happens to women when they protest, or even comment.

That's why the speech Jeremy Corbyn planned to give meant so much to me and many other women. He called out misogyny, wherever it is found, and vowed to combat it within his party. He didn't just defend women as victims but hailed them as change makers and campaigners, the solution and not the problem. He referenced courageous women activists from African-American Dorothy Height to bereaved Hillsborough campaigners Anne Williams and Becky Shah: pointing out how vital the beleaguered Human Rights Act had been to the latter two women's fight for justice.

He spoke about the horrors of domestic violence and the fact that, because of closure of so many refuges, Women's Aid estimates that 167 women and children a day were turned away from refuges last year. You don't go to a refuge, fleeing with often no more than the clothes on your back and leaving behind everything you know, unless you are in real fear. I've worked with Women's Aid and the Freedom Programme, and met women like Rachel Williams and Mandy Thomas, respectively shot and stabbed by their husbands – these are the real women behind the headlines, women Corbyn wants to help.

Had the UK government ratified the Istanbul Convention, they would be forced to help them, too. And Corbyn's speech would have forced them to explain their failure to do so, had you not stolen the limelight.

I can't believe you actually disagree with a word he said, which makes it all the more perplexing.

In conclusion, Peter, the Tories must be delighted with you. No wonder people are speculating on social media that, as a prominent member of the Green party, your real aim was to damage Corbyn. You have seriously delayed and derailed a major intervention for women's – for human – rights, whilst not helping one single terrified Syrian civilian to sleep safely in their bed.

Dr Louise Raw is a historian, journalist, speaker and campaigner. She appears on television and radio, is the author of Striking a Light (Bloomsbury), and organises the annual Matchwomen’s Festival in London (next 1st July 2017)