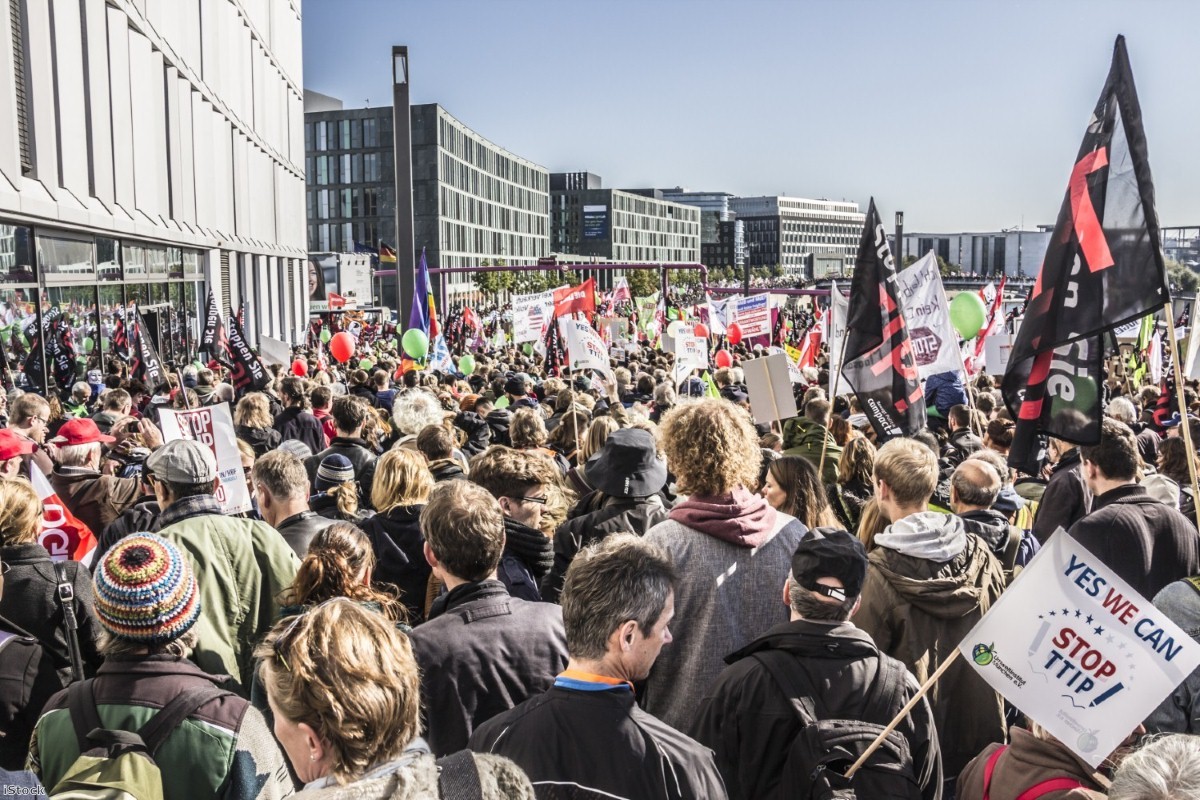 In the beginning, only a small clutch of dedicated activists, trade unions and charities raised the red flag against the now hated EU-US trade deal, TTIP.

Fast-forward a couple of years, through leaks of TTIP chapters, exposés by journalists and huge protests, European countries are now falling over themselves to reject this deal. One by one, we have seen Germany, France and now Austria condemn TTIP and any chance of its success.

But what explains this apparent about-face from politicians who were previously all too keen to label TTIP's opponents as 'anti-trade' and 'anti-US'?

People power has played a crucial part. The domestic politics of France, Germany and Austria – all of which are due to have elections in the very near future – are also critical. But the fate of another secretly negotiated and dangerous trade deal, Canadian TTIP 'CETA' is also a key factor.

The European Commission's director-general for trade said recently that if CETA is not passed, the EU's trade policy will be "close to death". For the champions of an avowedly neoliberal and consistently secret trade agenda, CETA has now become the rallying point.

CETA is the Canadian TTIP. Like TTIP, it champions the destruction of rules designed to protect society and the environment – as laid out by a new report which highlights the huge differences in food safety rules between the EU and Canada, which big business wants to bring down to the lowest common denominator.

And just like TTIP, CETA is also designed to prevent the renationalisation of public services, at a time when more and more people are beginning to recognise the myths of privatisation from its repeated failures.

And, perhaps most worryingly, CETA also includes a cosmetically rebranded version of the ISDS corporate courts' system which while looking palatable contains the same fundamental dangers: the destruction of the law as we know it, in order to create a one-way justice system for big business to sue states for lost profits.

The corporate court rebrand was only cooked up as a reaction to the highest ever response to a European Commission consultation, which showed 97% of people wanted them scrapped. In the words of UN Independent Expert Alfred de Zayas: "ISDS cannot be reformed. It must be abolished."

And for the UK there is a particularly cruel sting in the tail. The UK could still be sued under CETA's corporate courts for up to 20 years after Brexit, destroying parliamentary sovereignty in one fell swoop, a startlingly unreported fact.

Even worse, under CETA's terms, a US corporation operating in Europe which also has a subsidiary in Canada can access CETA's corporate courts. That means 41,811 US corporations – 81% of all US firms in the EU – could sue us under CETA's rules. So who needs TTIP anyway?

This is our message to leaders who oppose TTIP: if your opposition to this deal is genuine, then listen to your electorates, your trade unions and civil society groups and oppose CETA too.

And this is our message to the people of the UK: if you value parliamentary sovereignty, our legal system, public services or democratically made rules to protect society and the environment, tell your MEP and MP that they must stop this toxic trade deal before it's too late.

Mark Dearn is the senior trade justice campaigner at War on Want. He has previously worked as a journalist, for the End Water Poverty coalition, and Philippines-based NGO, IBON International.