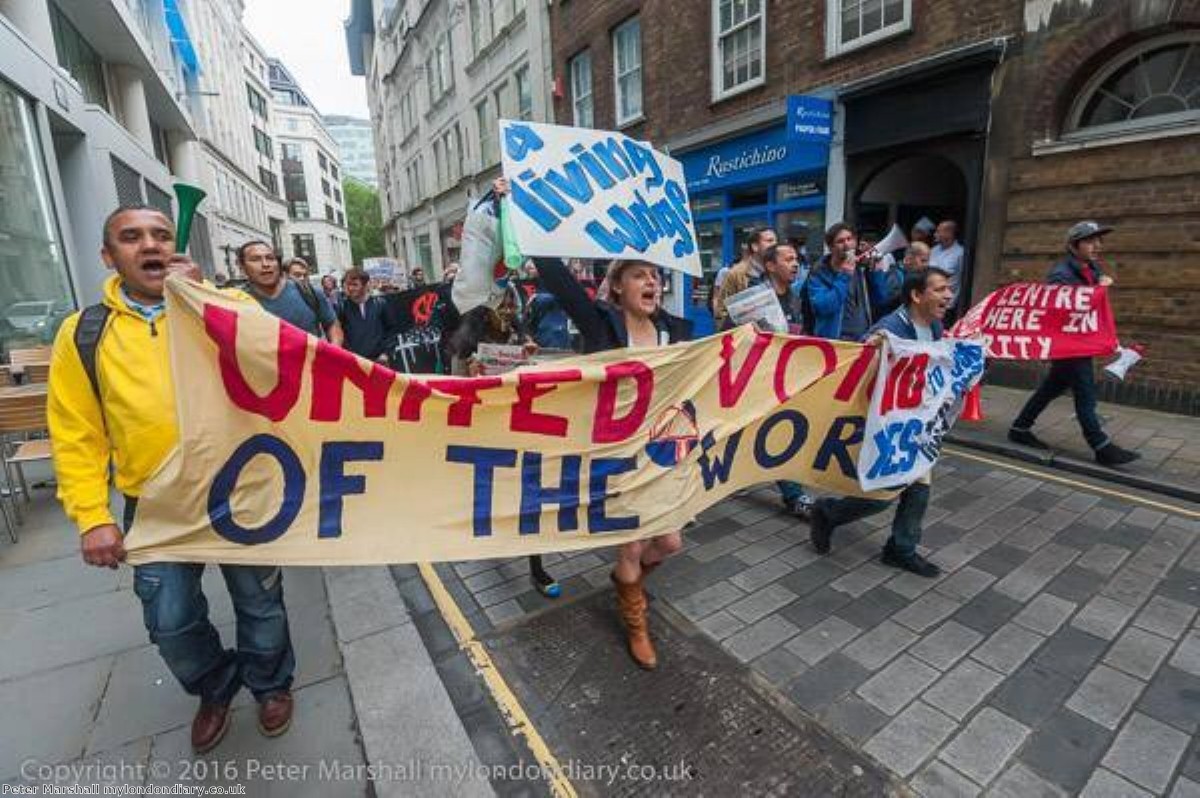 By Petros Elia and Daniel Stone

It took 61 days of strike action, but a group of migrant cleaners working in the city of London last week resolved their dispute with their employer, winning, amongst other things, the London Living Wage. But right across London low paid workers face a similar battle for better pay and conditions.

Nearly all of London's big retailers, restaurants, galleries, museums, and universities have one thing in common: a reliance on a flexible, outsourced labour force employed on short-term or zero hours contracts with very low rates of pay.

This invisible workforce of cleaners, porters, security guards, construction workers, kitchen staff and catering assistants are fundamental to the city and everyone's experience of it. They keep the capital running yet their terms and conditions and levels of pay make it almost impossible for them to live there.

The United Voices of the World (UVW) is a small, member-led trade union which was set up by and for these workers. We survive on a shoestring budget and are entirely volunteer run. But, over the past two years, we've won significant victories, including securing the London Living Wage and better terms and conditions for hundreds of workers.

Our successes have often come in the face of massive opposition and open hostility from employers who, rather than negotiating with us, will often seek to bully, intimidate or even sack our members for merely being a part of a trade union and speaking up for their rights.

The issue of sick pay is a stark example of how difficult circumstances are for many of our members. Most workers in the outsourced sector only receive statutory sick pay if they fall ill. The rate is a miserly £88.45 per week and even then it is only accrued after an employee has been off for four consecutive days. In effect this means that for the first week of work lost through sickness, workers are forced to survive on £35.

A period of extended sickness can mean people are unable to pay their rent and therefore have to make the hideous decision of choosing between their health and their home.

Cleaners, whether it be in hotels or offices or institutions deserve recognition, #livingwage and a union! @UVWunion pic.twitter.com/MzfKSNrm0Y

After a long campaign at the auction house Sotheby's we became the first union to secure occupational sick pay for outsourced cleaners and security guards in the private sector. But many of our members working elsewhere continue to be forced to work on through sickness, exacerbating their illnesses or injuries because they simply cannot afford to live on statutory sick pay.

This situation is not the result of the actions of a few rogue companies. Hostility to unions and disregard for workers' welfare is endemic within London's outsourced service sector. Indeed, the highly competitive world of outsourcing in sectors such as cleaning, relies on a non-unionised, un-organised workforce which can be hired and fired at will and given increasingly intensified workloads.

This is why companies have sought to block our attempts to organise and mobilise workers. In one case, we were forced to fight a legal battle against an application in the High Court which intended to prevent our members from organising a picket outside their place of work. We won. It was a significant and vital victory but the costs we incurred defending the action were significant and threatened to undermine our ability to carry on the vital work we undertake. As a result we have had to launch an emergency appeal for funds.

The recent debate over the UK's EU membership has often focussed on the idea that migrant labour is pushing down wages. This framing of the issue is a get out of jail free card for the exploitative companies who are responsible for imposing the terrible conditions and poverty pay which our members are challenging.

Workers in London's outsourced sector will continue to have to struggle for their rights, whether they are migrants or not. In the words of Victor Ramirez, one of the striking cleaners at 100 Wood Street, "this is a cause not just for us but for everyone in Britain. We all have to eat, and we all have the right to a dignified life and dignified pay. Dignity is non-negotiable."

Petros Elia is the general secretary of UVW union. Daniel Stone is an employee for the NUT and is a supporter of the UVW.