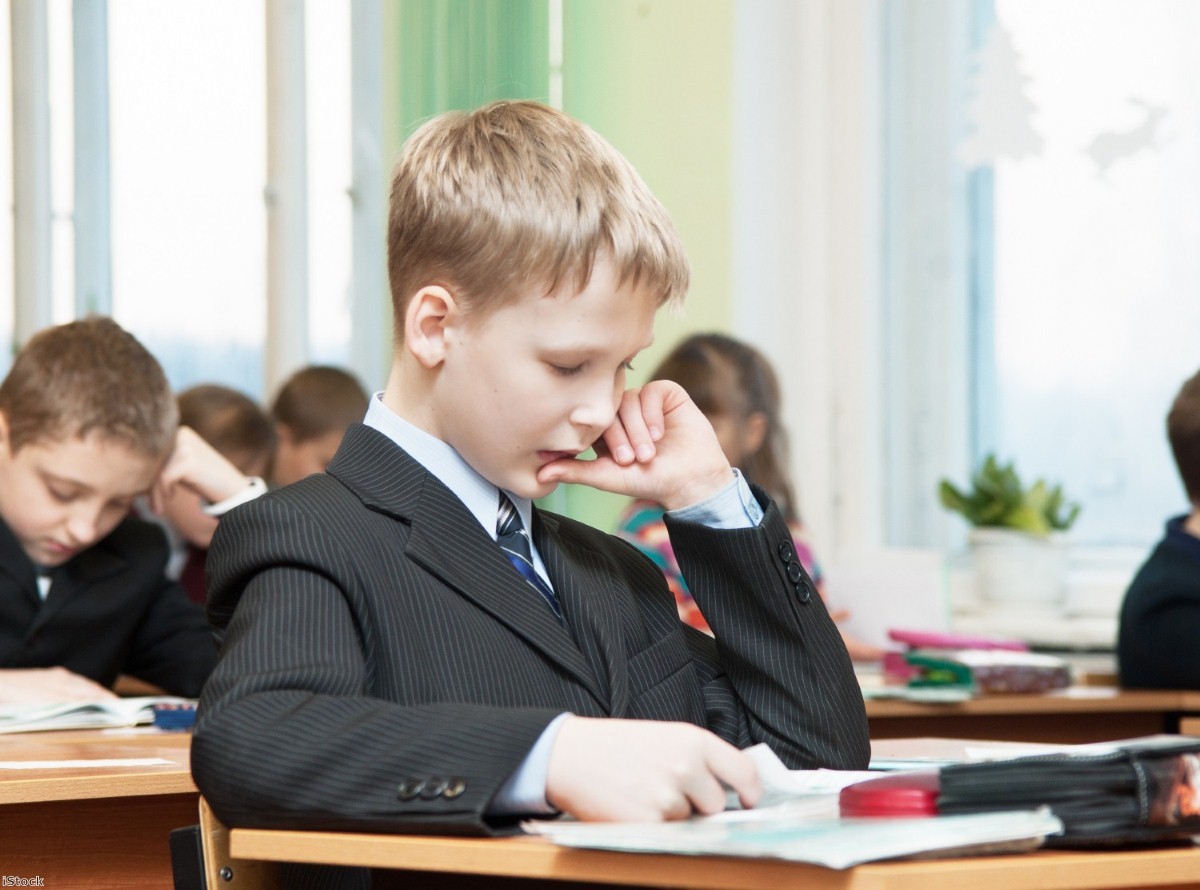 Even if you’re not a parent, a teacher or a primary school pupil, you can't have missed that it’s Sats week. The media is drowning in tales of tearful tweens and the trauma being inflicted on the nation's children by the tyranny of testing.

To be honest, while headlines scream "factory-farming education" and "inhumane testing treadmill", I want to scream back: "Oh please stop whining". Of course, starting a blog suggesting you all rush out and buy my new book I Find that Offensive! (being launched tonight) by showing zero sympathy for sobbing seven year olds may not be the best PR strategy. But the two things are connected, honestly.

My book was prompted by the relentless offence wars at British universities that are eating away at free speech on campus. Ideals of liberalism, previously associated with progressive causes, rarely cut it with younger generations. A recent survey reveals two thirds of students support NUS's censorious No Platform policies.

It is tempting to conclude this is because my generation has failed to force-feed Generation X, Y and Z with a diet of JS Mill and Thomas Paine. However, the puzzle I wanted to solve was less why freedom of expression is so unfashionable and more why today’s thin-skinned youth seem so genuinely upset when confronted by ideas and speech that they find offensive. While no doubt some of the most egregious safe-spacers are making a career out of playing the victim-card, most seem honestly incapable of coping with the most innocuous of slights or the normal rough and tumble of everyday life.

Why do those on the brink of life's great adventure of adulthood seem so cowed and scared, to the extent that they demand protection from offence? My argument is that fragility is a core part of many young people's identity because we socialised them that way. And that takes me back to primary school. In the book I trace a parallel between over-coddled children – pre-loaded with therapeutic concepts, encouraged to complain at discomfort – and the growing number of over-sensitive, offended young adults in academia. School policies in particular have promoted notions of vulnerability from an early age.

Look at what happened last week with the so-called Kids' Strike, organised by an anonymous group of concerned parents under the moniker 'Let Our Kids Be Kids'. I usually like a good anti-government protest, especially when it's grassroots and is striking out against bureaucratic tyranny. But all I could see when looking at those gleeful seven-year olds running free in the woods "playing in the mud and finding mini-beasts, not underlining adverbs" was their future selves – the infamous Generation Snowflake.

Every trope used in relation to the #LetOurKidsBeKids bunk-off presages the problems ahead.  The parents' complaint against the government's primary curriculum is that children find it "crashingly dull", urging teachers instead to teach "stuff that actually interests and engages children". So lesson number one for these primary school pupils: if your interests aren't catered for, if you don’t enjoy what or how you're being taught, you have a right to storm off in a strop? Once we concede education should be sanitised to cut out the horrible bits, we're setting up future demands for trigger warnings when lectures might contain any material deemed unpleasant.

Adult campaigners grumble that focusing on test results is at the expense of "children's happiness and joy of learning". So individual happiness trumps any of the often miserable but necessary hard work associated with learning anything new? No wonder universities are now organised around student-satisfaction surveys, and well-being is as likely to be the focus of protest as political demands. And once adults endorse their own children’s understandably childish preference for creative play over concentrating hard, teachers who dare enslave the darlings with tedious tasks such as memorising grammar rules are set as the enemy. Fast forward to undergraduates who believe their university education should be shaped around their comfort, who expect their professors to submit to their every whim.

One feature of today's free speech disputes is a refusal to engage in debate as a form of holding each other to account. Criticism of any number of identity groups is dismissed as the elitist expression of privileged power relations. How dare you, a white cis man, judge me? And where did this anti-judgmental idea take seed?  Once more, Kids Strike gives us some clues.  Recently axed mental health champion for schools, Natasha Devon, denounced testing "in developmental stages" for "making children feel judged, inadequate and anxious".

Meanwhile, in one much-cited Dear Nicky letter to the education secretary, Mum Kate Byrne (a pseudonym) complained: "I’ve worked hard to build [my son’s] self-esteem. I've worked hard to show him that…no-one's judging him". But demanding that no-one judge your offspring is a recipe for creating coddled youngsters who will grow up lacking self-awareness – and ignorant. If education fails to judge, the young are doomed to witlessness, never confronted with their weaknesses and hence deprived of opportunities to improve. And on campus, that means avoiding ideas in opposition to one’s own or refusing to share a platform with opponents who might criticise your worldview or judge your opinions.

But for me the most destructive aspect of phenomena such as Let Our Kids Be Kids is how they incite the young to see their problems through the prism of psychological harm. Irresponsibly, campaigners have asserted that pupils are "traumatised" by the prospect of failing the tests, with Sats blamed for inducing stress, panic-attacks and anxiety. Indeed Natasha Devon (who is co-founder of the appropriately named Self-Esteem Team) fell out with her government masters when she weighed in to the Kids Strike row by declaring "the culture of testing and academic pressure is detrimental to mental health".

Using the sort of scaremongering pseudo-science which should have been discredited with the toppling of Camila Batmanghelidjh’s neuro-nonsense projects, Devon claimed that "inducing excessive amounts of stress in children before their brains have finished developing can have catastrophic effects".  But the catastrophe is surely that adults are undermining children's resilience by pathologising what are, at worst, exam nerves.

When children as young as six self-report that they are 'stressed' or suffering 'anxiety', or talk of their own 'damaged self-esteem', did they learn this diagnostic vocabulary in the playground? Hardly. Instead they have imbibed adults' counselling jargon, encouraged by a glut of 'experts' to see challenges through a psychiatric lens, to internalise the lesson that they are emotionally fragile. This can too easily become a self-fulfilling prophecy. By the time they leave school, we've denied teenagers the tools and robustness they need to cope with the vicissitudes of life.

No surprise then – but tragic – that an NUS survey at the end of last year reported a staggering 80% of student respondents saying they'd experienced mental health problems over the previous year. And guess what – the main reason they gave for "feelings of crippling anxiety" was course-related academic pressure. Not only does this mean that colleges are now awash with therapy groups, workshops such as 'Keeping Calm and in Control', 'Mindfulness for Depression' 'Anxiety 101', but many contemporary free speech disputes are couched in the language of psychological harm.   Bans, safe spaces and trigger warnings are deemed necessary to cushion students from mental distress.  And the very meaning of mental illness is belittled, its ever-expanding definition made even wider in order to incorporate the ‘trauma’ of hearing Germaine Greer give a speech or clapping in meetings or walking past a statue of a 19th Century racist.

So, next time you see a child upset by the horrors of sitting a stress-inducing school test, reassure them that they'll cope.  Don't ratchet up their fears by indulging them or you could be helping to mould a future 'me, me, me' safe-spacer demanding that yet another speaker is no-platformed.  And next time you walk past a bookshop, buy I Find That Offensive!. And then come and argue with me about why I’m wrong.

Claire Fox is the director of the Institute of Ideas, a panellist on BBC Radio 4’s The Moral Maze and a regular contributor to TV and radio debates, including Question Time and Any Questions? Her new book, I FInd That Offensive!, is out now from Biteback Publishing.  Follow her on Twitter.