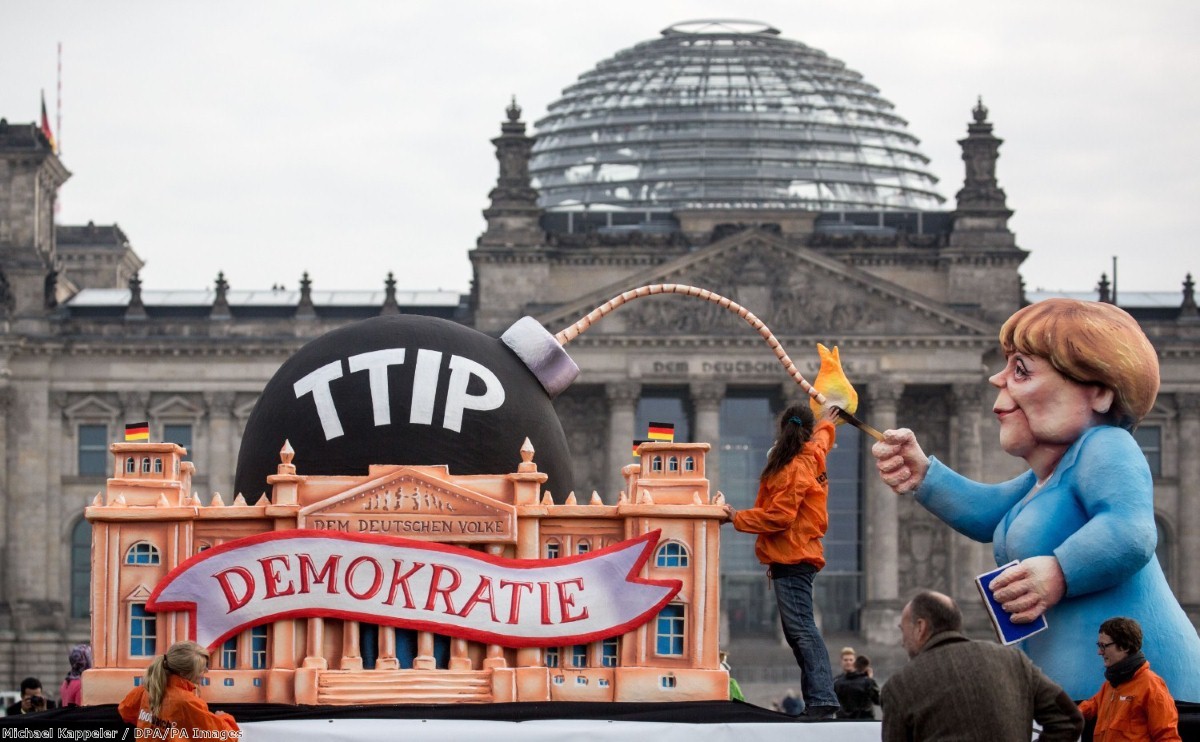 Opposition to the toxic TTIP deal has reached a tipping point

In the past few days opposition to the Transatlantic Trade and Investment Partnership (TTIP) has snowballed after an unprecedented leak of 13 chapters of the controversial deal.

In a breakthrough moment following the leaks, the French government have threatened to block the treaty, describing it as "a bad deal".

The mood has clearly shifted and key governments are now paying attention to the vociferous public opposition to the deal.

Yet despite this, the European Commission remains dismissive of democratic accountability, disdainful of public opinion and denying the stark reality that TTIP is unravelling around its feet.

The leak of TTIP documents follows a push in the Netherlands to hold a referendum on TTIP. Meanwhile in Britain, 150,000 people have written to Barack Obama in protest against this “wish list for big corporations” and plummeting public support in Germany.

The texts that leaked are key documents that, after more negotiations, will form the legally binding treaty itself. These 'consolidated texts' have been kept so secret up until now that even British MPs still can’t read them.  Any MEP who wants to get access to the texts has to sign a lengthy non-disclosure agreement, submit all electronic devices and be accompanied at all times by an official from the European Commission.

With such controversy surrounding the deal, it was inevitable that the documents would leak: for three years, campaigners, the public, MEPs and even the EU ombudsman have called for greater transparency and the release of the documents. But the European Commission has resisted any and all attempts to shine the light of scrutiny on TTIP’s key texts.

At the beginning of the deal, the European Commission slapped a 30-year ban on access to them. It then proceeded to tell Europe that TTIP was 'transparent' – supposedly the most transparent trade deal ever negotiated.

Yet even now, when the world has seen the extent of this huge leak of documents, Trade Commissioner Cecilia Malmstrom is still shamelessly trying to pull the wool over our eyes. Malmstrom’s response to the leaks was to frame them as "supposed leaks" – while not once directly denying their authenticity.

And we know why: the documents reveal that under US demands, the EU’s small farmers will be obliterated and the critical 'precautionary principle' is being targeted for removal. Under a proposal pushed by the EU our ability to make rules to protect society, health or the environment will be subjected to a unique new power for big business to challenge all rules before they are even in place – and to sue governments in a private justice system if any rules affect their profits.

Popular opposition to TTIP is entrenched right across Europe – as one of the biggest pan-European social movements in a generation and a record breaking petition signed by more than 3.4 million people demonstrate. And now, with every day that passes, TTIP is prompting increasing scepticism from the public and governments alike.

The European Commission is becoming increasingly isolated in its blind opposition to the facts. And despite its belief that it operates above any mandate from the people of Europe, it is time for this unelected, unaccountable body to be brought to account. The people of Europe deserve far better.

Mark Dearn is the senior trade justice campaigner at War on Want. He has previously worked as a journalist, for the End Water Poverty coalition, and Philippines-based NGO, IBON International.