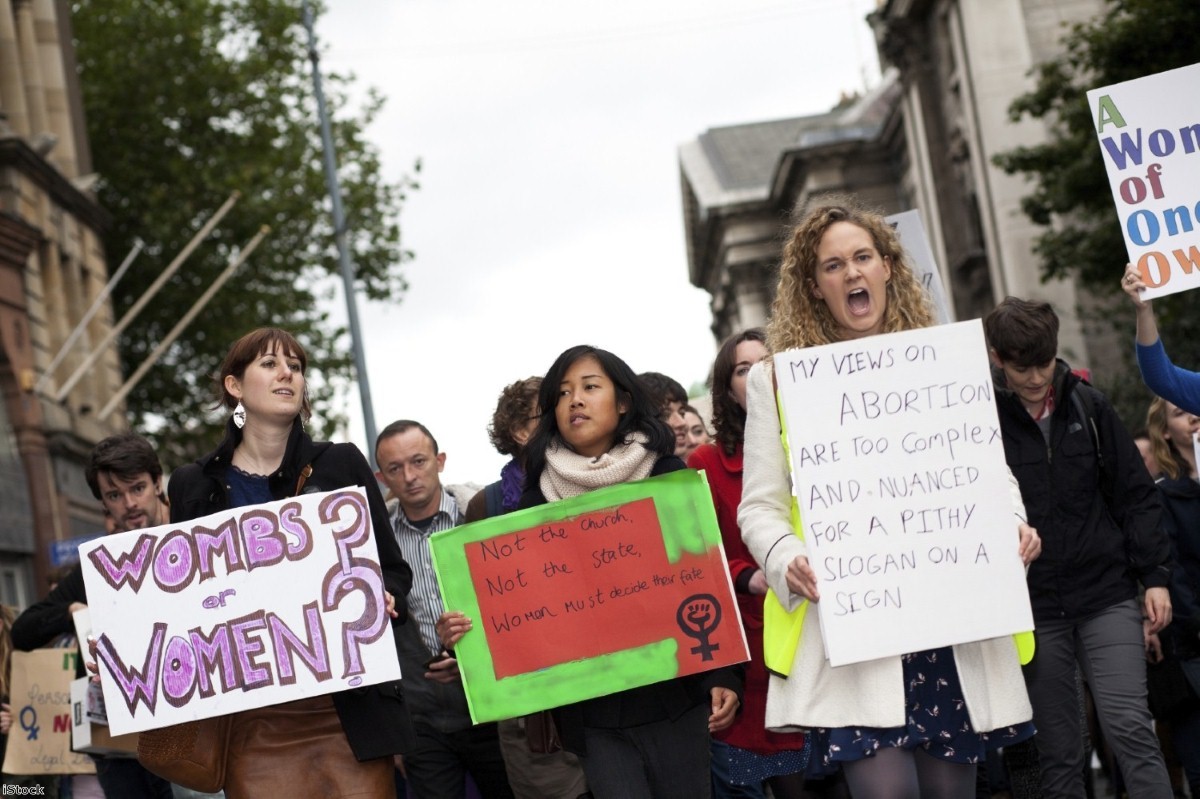 Have we fallen down the rabbit hole? Have we been transported back to 1952? Because the recent news of a woman convicted for ordering abortion pills, in Northern Ireland, suggests that we have. From the outrageous comments by Donald Trump, to the attempt to roll back the clock on reproductive rights in Poland, those of us who are pro-choice have been left reeling.

Trump's comments that women should be punished for having abortions are easy to dismiss, but we need to remember that this is in line with the views of many conservative Republican lawmakers across America. In fact, women in the US are already punished for having abortions. Laws across many states are decimating their right to choose. This includes laws that force doctors to lie to their patients about there being a link between breast cancer and abortion, TRAP laws that impose unnecessary building regulations on abortion clinics, and the forcing of women to pay for funerals for foetal remains following an abortion.

Closer to home, women in Europe are facing ever-mounting barriers to access. In Poland – a country with already highly restrictive abortion legislation – the government is now trying to ban abortion outright in all cases, even if the woman’s life is in danger. In Northern Ireland, the 1967 Abortion Act does not apply, their abortion law is to this day the draconian 1861 Offences Against the Person Act. Women can only legally get an abortion in Northern Ireland to preserve the life of the woman or if continuing the pregnancy would make her "a physical or mental wreck". The reality is hardly anyone is deemed to meet these criteria, meaning that only 23 terminations were recorded in Northern Ireland in 2013/14. In reality, the availability of abortion pills over the internet means the true figure is much higher.

This has become a class issue. Rich women will always be able to access abortion, while poor or undocumented migrant women will continue to be forced either to continue unwanted or dangerous pregnancies, or risk prosecution for carrying out DIY abortions. As the recent judgement by Judge Horner, sitting in Belfast’s High Court, argued, the law as it stands "smacks of one law for the rich and one law for the poor" because women who cannot afford to travel to obtain a legal abortion are disproportionately affected.

Northern Ireland may only be one hour across the sea, but it is 150 years behind in terms of reproductive rights. This week, a judgement was made to hand down a three month suspended sentence to a young woman. Her only crime was having an unwanted pregnancy and being poor.

She couldn’t afford to travel to England for a legal abortion, in the way that over 1000 women and girls from Northern Ireland and the Republic of Ireland are forced to do every year. Therefore her only option was to take matters into her own hands and buy abortion pills online. Instead of supporting the young woman, who was 19 at the time, her flatmates reported her to the police, saying that she had no remorse for her 'crime'. This tells us all we need to know about the climate of stigma, fear and surveillance in Northern Ireland.

We shouldn't forget that Northern Ireland is part of the UK. Women there pay the same taxes and national insurance as women in England, Scotland and Wales do to have healthcare provided by the NHS. Yet, unlike women in the rest of the UK, they are denied access to legal and free abortions. These women have a double burden of not being able to get this necessary healthcare locally, but also having to pay for not only their travel and accommodation, but the abortion itself. If it wasn't for Abortion Support Network, an organisation which supports and finances women coming from Ireland to the mainland to have abortions, there would be far more women facing the same choices as the woman who was prosecuted this week.

As we all know, abortion does not magically disappear when it is made unavailable or outright illegal, it only goes into the back alleys. Women are criminalised or die. That is the truth of the matter.

Women’s rights are human rights. This fact is something the Polish prime minister Beata Szydlo is wilfully ignoring in her support for an all-out ban on abortion. The Roman Catholic Church in Poland has launched a campaign for a total ban on abortion and the prime minister has given it her backing.

But activists are already bracing themselves to fight this blatant attempt to destroy women’s reproductive rights. Some staged a mass walk out of a church service in Gdansk as a priest read out a letter in favour of a proposed ban on abortion.

This attack on reproductive rights is happening on our doorstep and we ignore it at our peril. The anti-choice movement is well-connected and well-funded, so pro-choice groups need to go on the offensive. We have to stand in solidarity with women in these situations, we cannot rest on our laurels.

This Saturday, pro-choice campaigners will be 'handing themselves in' to West End Central Police station in central London at 1pm. We are also calling for similar symbolic, small-scale actions across the country.

Abortions happen every day all over the world. When carried out legally, they are both necessary and safe. No woman should be criminalised or shamed for exercising bodily autonomy.

Kerry Abel is the chair of Abortion Rights