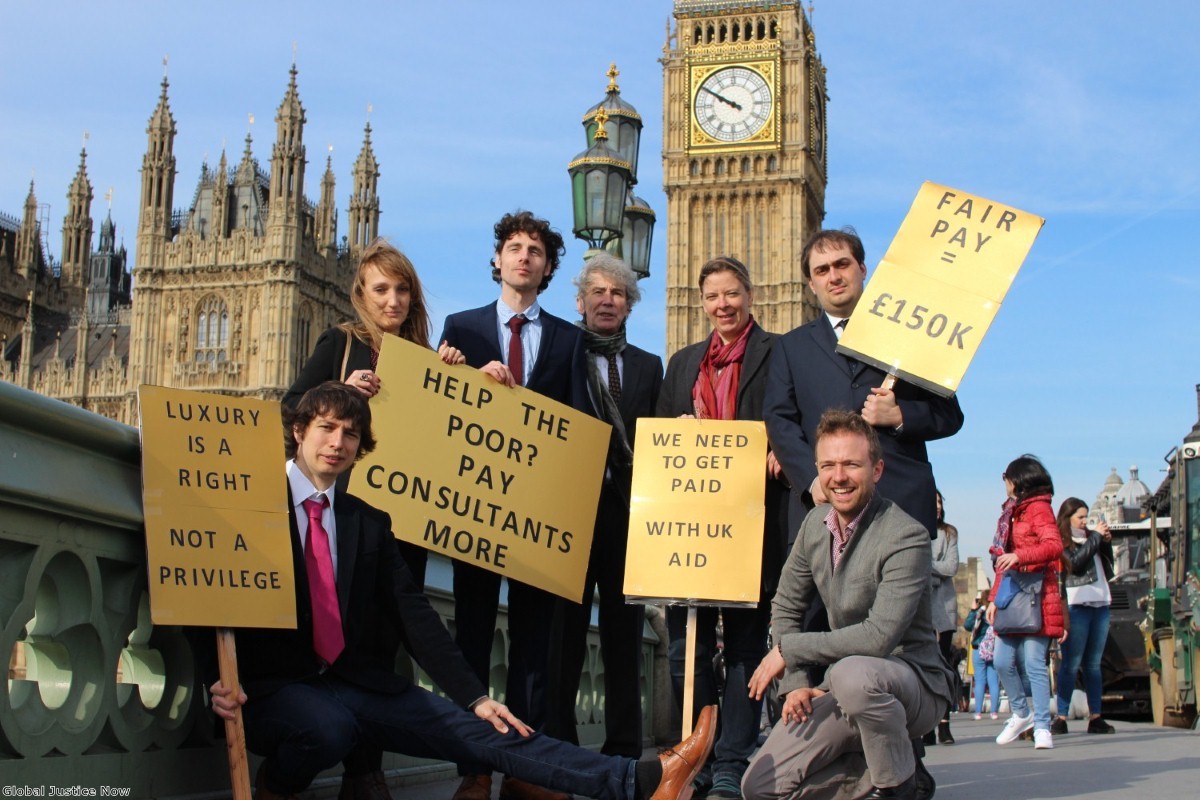 It’s never been a better time to be an aid-funded business. Alongside the UK’s now legally enshrined commitment to spend 0.7% of its national income on aid, a growing trend has emerged where an ever-increasing amount of that budget is spent through private companies. DfID spends some £1.4 billion through private contractors annually, with most of it going to just 11 suppliers. Most of them are private ‘development consultants’, self-styled ‘experts’ on all things international development.

Global Justice Now has just published a report exposing how one such consultancy company, Adam Smith International (ASI), receives hundreds of millions of the UK’s aid budget. In the last five years, ASI has won at least £450million in UK aid funded contracts, with the true figure likely to be even higher. In 2014 alone, DfID spent £90million through the company, who witnessed a whopping £14million profit that same year, proving what a lucrative business international aid has become for these UK companies.

This growing pattern of a small number of private companies winning ever more aid-funded contracts raises serious concerns about the extent to which the core objective of aid spending – poverty alleviation – is truly being met.

As one of DfID’s favourite consultancy companies, ASI is being paid (with UK tax-payer money) to promote projects that often have questionable benefits for the world’s poorest communities. In Nigeria, ASI has been the lead consultant in a £1billion programme to privatise the country’s electricity sector. Price increases as high as 45% have led to demonstrations against the ASI facilitated privatisation programme. In Afghanistan, ASI have assisted the privatisation of the largest banking network in the country and also helped write an ‘investor’s guide’ to the country. In both Afghanistan and Nigeria, the irony of using public aid money to promote free-market reforms (and to pocket a sizeable profit along the way) has clearly not been lost on ASI.

Meanwhile, in Papua New Guinea, ASI helped to draft a policy to handle ‘involuntary resettlements’ which are more commonly known as evictions, alongside helping to write a new mining act. It beggars belief that these projects are considered to genuinely meet the core objective of poverty alleviation.

But the sad truth is the idea of aid money being primarily about poverty reduction is slowly being forgotten. This is most explicitly evident in the Conservative government’s latest strategy on aid spending where poverty alleviation has slipped to being the fourth of four key objectives. A higher priority apparently is to see aid spending as an opportunity to create “new trade and investment opportunities for UK companies”.

Concerns around the relegation of poverty reduction were the focus of last month’s international development committee report, which highlighted how national interests are increasingly prioritised as a major objective of aid spending.

If the UK government, and their consultancy friends, are honest about the UK playing a part in helping to address global poverty then its time they stop prioritising their own commercial interests and personal bank accounts. With ASI’s directors earning up to £250,000 a year while minimum wage earners in Nigeria (where ASI works) take home approximately £760, is this really the best way to address poverty?

This month marks the 15th anniversary of the government formally ‘untying’ aid from UK commercial interests. Which makes it a particularly bitter truth that the lion’s share of DfID contracts are still won by a small group of UK contractors, while it remains rare for DfID to work through contractors from the global south.

If we are genuine about spending the UK’s aid money in ways that actually reduce poverty, then we need to end this accumulation of private wealth from public money and start addressing the fundamental structural inequalities in wealth and power that underlie it.

The idea that consultants earning six-figure salaries are the only ones who know how to fight poverty is simply offensive. In fact, these firms often represent the very systems and establishments that perpetuate the underlying structural causes of poverty.

Instead of lining the pockets of wealthy consultants, UK aid could start to be used to strengthen public services, support civil society and build democratic and accountable institutions, all of which serve to meet the needs of the intended beneficiaries.

A spokesperson from ASI commented on the Global Justce Now report:

"Adam Smith International is a transparent non-partisan organisation dedicated to strengthening public services, supporting civil society and economic growth, and building democratic and accountable institutions. Our projects are always aimed at helping the poorest, not big businesses. The vast majority of the world’s poor are in the informal private sector. To bring people out of poverty one must address the factors that are keeping them poor. We engage with the private sector to reduce poverty by helping create jobs and make markets more accessible.

"This type of development is widely reflected in donor strategies and recognised in the 8th sustainable development goal. Our staff and expert associates are from diverse backgrounds: all committed to poverty alleviation. For example, 84% of our team on our Nigeria tax reform project are Nigerian. Most of our projects partner with local organisations; we help build their capacity and always encourage local ownership. Our different skills are not exclusive, they complement each other.

"The three projects mentioned in the Global Justice Now report are taken out of context and misreported. The two DFID programmes singled out were conceived and started by the last Labour Government and have been continued at the strong request of the Afghan and Nigerian Governments because of their evident success. In Nigeria, we have saved Nigerians £1.1 billion per annum in power costs. In Afghanistan, the mining law we helped draft – although it was subsequently amended – was a significant improvement in terms of transparency and accountability from the previous one. In Bougainville, the cited report from Jubilee Australia only interviewed those they knew to be opposed to mining. The challenges facing developing countries are complex, interlaced and extensive.

"Solutions require specialist expertise such as is provided by organisations like ours. Contrary to what is suggested, it is not feasible or economic for DFID to retain in-house on a permanent basis the extremely wide range of technical skills that can be delivered by external technical experts. There are many different reasons why such experts can be used more efficiently and more cheaply than civil servants to deliver DFID’s programmes: these include: their deployment on an ‘as needed’ basis for as long as their particular skill set is required – and not a moment longer; their ability to operate at a different – cheaper – living, risk and duty of care levels. DFID’s focus on the value for money of its programmes is well served by this approach.

"We do not govern or decide the UK’s aid policy. We respond to the needs and requests of governments and donors to tackle complex development challenges that require specialist expertise. We respond effectively, with professionalism, dedication and specialist knowledge. We are proud of our teams and projects and welcome those interested to see for themselves how we are making a difference."